The Greener Side of Life

It’s the winter that keeps on giving. Maybe it’s just the winter that needs the last word, when everyone is too caught up in the impending spring and summer to retaliate against the shoveling and plowing anymore. We just give in. We put on our boots and cram our heads into our hats and head out into the white abyss without a dismissive word about the darn winter or cursing the yet-again snow-covered porch. We’ve become complacent with the winter world around us.

The only animals that seem to be protesting are the chickens. They have left their coop exactly once per day for the last five days to eat and drink. Egg laying has all but ceased.

The spring tease a few weeks ago had me excited about sitting on the GREEN grass, hiking in the GREEN wilds and strolling through the farmers market, checking out the GREENS. Im supposed to start a new farming gig in a few weeks, and it seems like the season may be off to an extended indoor start.

Does a green filter make this shot (from April 6) seem any less wintery?…No. The answer is no.

It has snowed every day for the last five days in South Central Alaska. The farm has gained about a foot and a half of snow, the avalanche warnings are High–“Travel in Avalanche Territory NOT Advised!” The temperatures on the 10-day forecast hover somewhere between 20 and 32 degrees Fahrenheit. It is the never ending winter. Luckily, I really like winter. We’ve been out skiing every day, and I even got a snow day on Tuesday. I felt like a kid again.

Hatcher Pass in white out conditions, April 7. This photo hasn’t been edited at all. I’m really surrounded in nothing but white…it feels like North Dakota in January.

Just two weeks ago, my students and I were skipping around in the sun, celebrating the first day of spring. We marveled at some green blades of grass poking out around the foundation of the School House and noticed the knobby little spring fingers of the tulips, rhubarb and jonquils poking through the nearly frozen soil. Now, these little joyful signs of spring are under nearly eighteen inches of snow that is showing little sign of leaving anytime soon.

This is what a lot of snow in mid-April looks like. There is an abandoned house under there somewhere.

“Green” has many connotations: money, a newbie, someone who is envious, or to describe any environmentally conscious products, people or mitigation. I’ve been focusing on green news, or those currently circulating stories about the environment.

I’m an NPR, BBC, New York Times kind of news reader. If I’m using the internet to read my news, I often go to the tabs that say something about the environment or eco-happenings. For the NY Times, I somehow subscribed to getting any and all articles that are related to agriculture. I don’t know how I did that, but I’m happy I did! Every morning I wake up to some interesting tidbits about the world of agriculture sitting in my e-mail inbox.

Here are my top three GREEN stories that, perhaps, you haven’t been following and might find interesting…

This green news is sad green news. However, there is a glimmer of hope in it for some. The vanishing of the bees has been a concern for several years. There have been concerns about Colony Collapse Disorder, sensitivity to monocropping, loss of habitat, sensitivity to cell phone towers and fears of other viruses.

Most Recently, concerns have arisen about how our favorite pollinators react to neonicotinoids–insecticides which target the nervous system of insects. They have been hailed as a beneficial insecticide because they display low toxicity in mammals. The concern with bees is that this insecticide could be affecting their homing abilities–leading to colony collapse.

What good is low toxicity of an insecticide in mammals if it could possibly be killing off our best pollinators? Without pollinators, there won’t be enough food to feed people, let alone to feed the animals that we like to eat.

In March of this year, a group of beekeepers and environmental groups sued the EPA for allowing the dispersal of these insecticides without proper toxicity evaluations. Of course, this case is ongoing and will likely take a few years to come to resolution, as many cases involving federal agencies do.

While this may be a case of sad green news, it at least raises awareness of this issue, and encourages us to further love our buzzing friends.

The small Himalayan country of Bhutan has recently announced that all of the farms in its country will be organically operated! This won’t be hard for the country, as many of the farms are small and traditionally (organically) run already. The government of Bhutan has celebrated this movement as a way to increase agricultural production through healthy means while also decreasing dependence on foreign inputs. They hope that the increased production of niche crops will be economically beneficial as they will export to China, India and other high demand neighboring countries.

This is some of the best news I have ever heard. Bhutan, like other countries in the region, has had a fairly tumultuous past, with recent shifts from a monarchy to a democracy. However, Bhutan seems to have been pretty progressive through the past century. What else can we expect from the only country that values its “Gross National Happiness”?

A dairy farm in Indiana has been using natural gas captured from manure to fuel its operations for several years. Throughout that time, the farm was using about half of the manure the farm produced, allowing the other half of the manure to release its precious methane into the atmosphere. Methane is one of the strongest greenhouse gases, its impact is more detrimental than carbon dioxide, sulfur dioxide and other greenhouse gases.

Recently, the farm has been capturing the natural gas from the excess manure and using it to power its fleet of 42 trucks. This will save two million gallons of diesel use per year.

While methane isn’t the cleanest natural gas to use, it is going to be created on these farms anyhow, so it might as well be used. Furthermore, it will help reduce total greenhouse gas emissions by offsetting the production and use of Big Oil.

Another cool part of this story is that the farmer still uses the solid waste from the digested manure as fertilizer for his fields. If we are going to have giant-mega-super huge-confined animal operations, they might as well be like this, right?

Those are my top three recent Green News Stories. These stories do a multitude of things for me–they can give me hope for the future of our planet, they can get me riled up and ready to take action, or they can just give me sweet, sweet knowledge. In any case, staying informed is a good thing for all of us Farm Girls. Women have been so influential in keeping this world as healthy as possible, let’s keep it up. 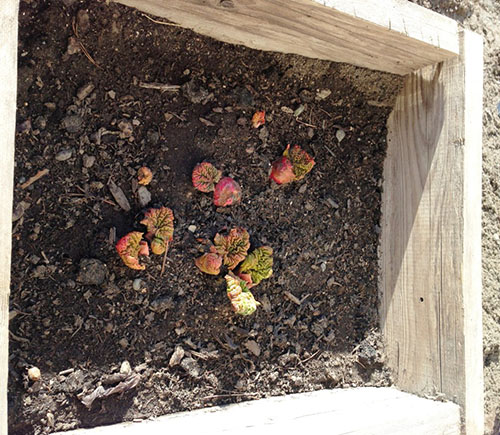 Some Rhubarb in Fairbanks….The rhubarb on our farm looks like this under its thick blanket of snow.

Sending you peace and Love,