Foraging for wild edibles has been one of my favorite activities since childhood.  My mother hunted (and continues to hunt) for wild puff ball mushrooms, morels, wild ramps and fiddlehead ferns.  We tapped maple trees in our yard and enjoyed the spoils of our relative’s hunting and fishing outings.  I’ve eaten cattail, wild sorrel, various wild berries,  fire weed, spruce tips, and many others.  We’ve even made salves, teas and balms with foraged plants and herbs. 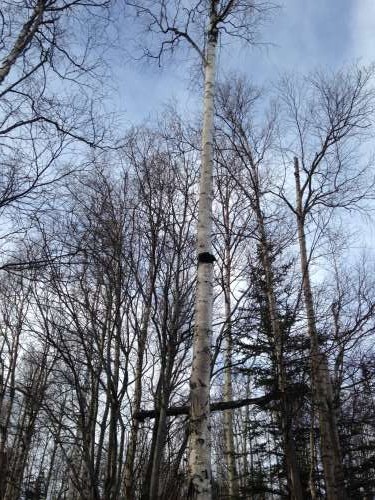 What is that black spot on that birch?! is it a nest? a burl? It’s chaga!

While agriculture is one of my great passions, Mother Nature has a way of cultivating some of the best culinary flavors and textures.  Wild medicinals are a newer interest, and they are also a little more controversial.  Their controversy lies in the lack of science behind many folk remedies–there isn’t much money for research when BigPharma isn’t making money off of the product!  While I do love science and turn to it for making many of my decisions, I also think there is credence in the generations of knowledge and use that come with traditional foods and medicines.

This is where we come to chaga, also known as cinder conks, or “The King of the Mushrooms.”  It is a parisitic fungus that grows on trees in the northern temperate regions of the world: Russia, Northern Europe, Korea and Northern China, Canada and northern parts of the United States.  It grows on many species of trees, but the desirable chaga grows on betula species of trees, more commonly known as birch!  Birch trees have many healing properties on their own.  Because of the chaga mushroom’s parasitic qualities, it takes on some of these properties–most notably betulinic acid.  Betulinic acid has antiretroviral, antimalarial, anti-inflammatory and cancer fighting properties. 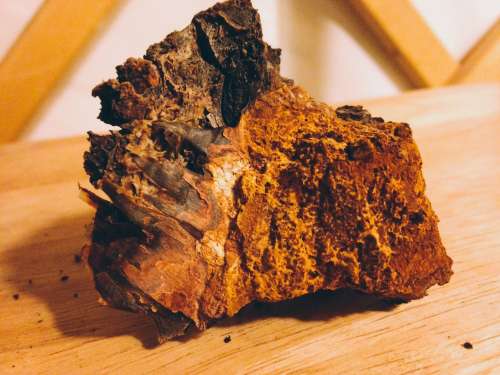 Chaga is known as an “adaptogen” which means that it helps one regulate, reduce and adapt to environmental stressors (ginseng is a more widely known adaptogen).  It benefits the immune, endocrine, cardiovascular and nervous systems.  It also helps treat auto-immune conditions like psoriasis, fights cancer, helps prevent colds and flus during the winter months, and supposedly helps with seasonal affective disorder.  It has been used for centuries in Russia and China for ailments of the stomach, liver, and heart, as well as a tonic, blood purifier, and pain reliever.  While none of these claims have been scientifically proven or approved by the FDA, the compounds found in the mushroom and studied individually support these claims.  It is even sold in Russia as a cancer treatment.

While chaga does fight some pretty major disorders and diseases, it is commonly drank as a daily tea–especially in the fall and winter months.  Users of the medicinal mushroom claim that it must be consumed almost every day for two months or more for noticeable and lasting effects.

I had never heard of this mushroom until a few days ago when I read an article that someone had linked to on Facebook.  I was immediately intrigued!  The most appealing part about this wild medicinal is that it should be harvested during the winter!  While the winter is largely coming to an end, we are just at the tail end of it here in Alaska.  When I heard that someone had been poaching chaga from private property a few days ago, I figured it was still early enough for harvesting (perhaps that was a bad assumption…but the sap isn’t quite running yet, so I think it’s okay).  I’m excited to have a foraging option for the winter!  Something that can be harvested on skis is pretty cool in my book. 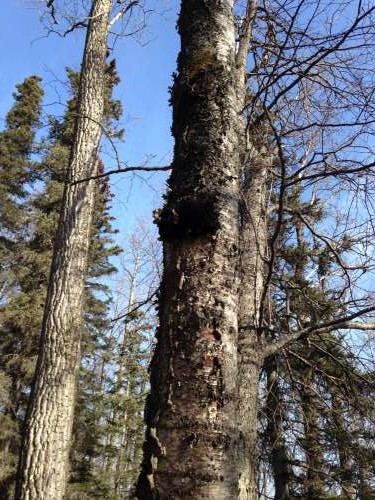 Our first positive ID. It’s hard to see in the photo bc the sun is coming from opposite the mushroom.

My farmer friend Melisse, her son who is Ava’s age, Ava and I all went out last week to search for this sometimes elusive fungus.  It is pretty easy to identify–it looks like a big burnt tumor on the trunk of older birch trees.  I have actually seen it many times but never realized that it was a fungus!  I always thought that it was some sort of protective scab on damaged trees (which it is, in a sense).  It didn’t take us very long on our hike until we found several samples of the mushroom.  It is very slow growing, so we didn’t harvest all of it that we saw, and we made sure to leave most of the mushroom on the tree so that it could regrow a bit easier.  I read that some people harvest it improperly, opening up big wounds which can kill the trees. 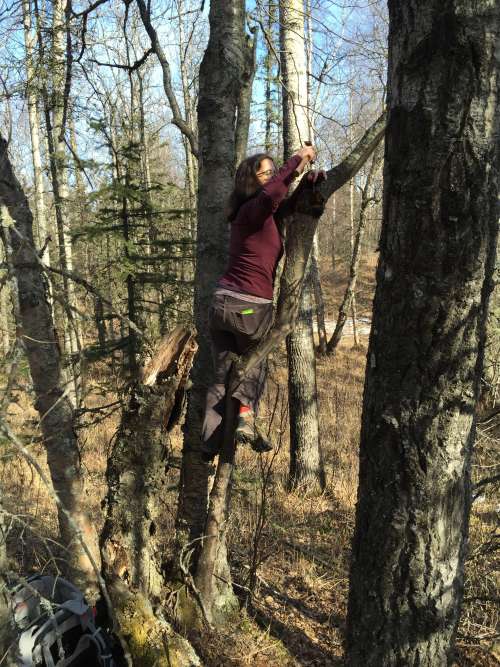 Climbing to get our treasure! Photo courtesy of Melisse.

Some people might have special chaga harvesting tools, but I just used a hammer and a flat head screw driver as a pick.  Most of the samples were high enough in the trees to necessitate climbing a bit, so I was excited to take on this challenge!  Climbing trees to collect amazing naturally occuring medicine?!? Count me in.

I ended up with several sizeable chunks of chaga, most of which are in the process of drying.  I did take a chunk out to test out as a tea that I’ve had for the last few days.  It can also be made into a tincture, or consumed in edibles.  Many people grind it up into a fine powder for tea, but I think I’ll stick with it in chunky form.  I just put some chunks in a pot of simmering water for about 20 minutes.  I then pour it into a cup with some spices (ginger, cinnamon, cardamom), honey and some milk.  It is yummy!  slightly bitter like coffee or black tea and a bit nutty.  It reminds me of dandelion root tea, a bit.  The chunks can be re-used until they lose their color.  One account says that she leaves a pot on the stove all winter and because of the chaga’s sterile and anti-bacterial properties she has never seen it ferment or go bad. 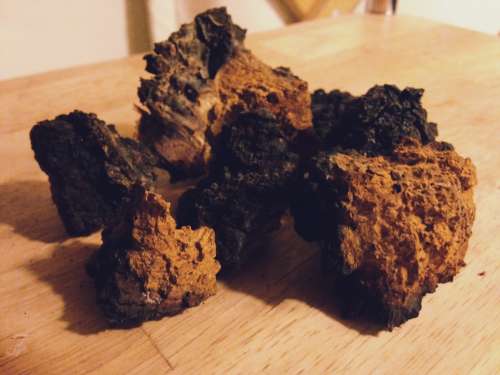 I have yet to feel anything revolutionary, and I probably won’t drink this tea religiously, but it is a fun and healthful option to add to my repertoire!  Obviously, I am not a doctor, herbalist or nutritionist of any sort, so don’t just listen to me.  Do some research on your own and see if this wild medicinal is for you!

Some sources claim a few contraindications to chaga consumption–most notably possible interactions with other drugs.  From what I read the problems mostly lie with blood thinners and diabetes related treatments.  However, like with any supplement or medicine, you should consult with your medical care provider before treating yourself, especially if you are taking other medication.

Have you heard of chaga?  Have you used it in any form? 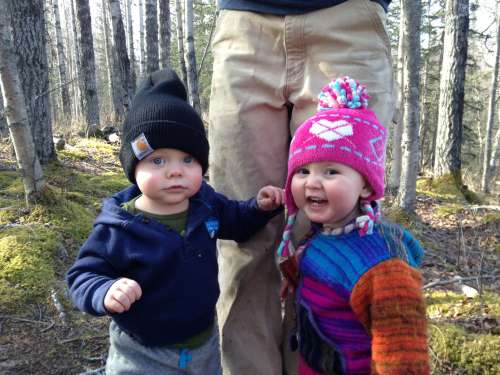 Babies in the forest!! They had so much fun stomping in puddles, picking up spruce cones and exploring their surroundings.

If you live in the north, I suggest going for a hunt in a birch stand near you!  Even if you don’t find or harvest any of this “King of the mushrooms,”  a walk in the trees is a wonderful way to while away some time.

Happy spring to all and to all a healthful season!