My Muse is a Pollywog

Did you know that every month is dedicated to a smattering of things?  According to Wikipedia’s “List of commemorative months” April is: Child Abuse Prevention Month, Financial Literacy Month (because of tax day?), National Multiple Birth Awareness Month, Autism Awareness Month, School Library Month, Month of the Military Child, Earth Awareness Month (happy belated Earth Day!), and Math Awareness Month (ugh) among several others.  The only one I was aware of, however, is National Poetry Month!

April is a great time to write and read poetry.  It is a time of hopeful waiting.  Winter is over, right?  Wrong says that one blizzard that waited until all of the snow had almost melted.  Gardeners and farmers are eager to work the soil, but it is too saturated and needs time to wake up.  April is the time of the year when I really, really, really (really) want to sit on the ground, outside without anything between myself and the ground (well, maybe some jeans); alas, we must wait for everything to dry out.  So, we might as well write something, yeah?

I do not consider myself a true poet.  However, a few times per year my poetic juices are stirred. Recently, my muse came as a cute little lady dressed like a pollywog! 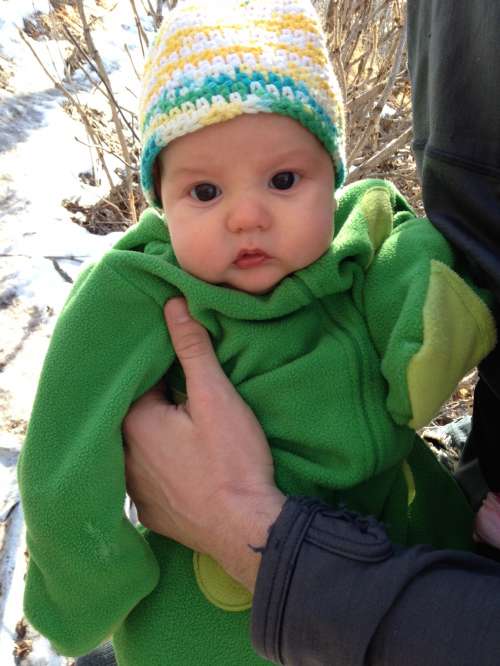 Ava in her Warm Frog Suit. Our little tadpole!

Ava has an adorable outdoor fleece suit that looks like a frog. It has little eyes on the hood and nice green spots on it to really seal the cuteness deal.  I happen to LOVE frogs.  I grew up with a pet frog named…”Struggles”! His brother “Funny” died prematurely from some crazy looking tumor on his belly.  But Struggles lived on. I got him in second grade after we raised frogs from tadpoles, and he (or she?) lived to be thirteen years old.  When I left for college I gave him to my older brother to watch.  I was told on Thanksgiving of my freshmen year that he had died.  I cried.  We had quite an attachment.  I can still remember his cute chirps and ribbits at night.  I have spent countless hours chasing and catching frogs, showing tadpoles to kiddos at nature centers, and gandering at pollywogs in the vernal ponds of my childhood. You also may remember the leopard frog that showed up right after Evan proposed to me.

Perhaps the frog is my spirit animal?

So, I LOVE frogs.  However, Alaska seems to be sorely lacking in frogs.  We only have one species: the wood frog, and I’ve seen it twice in two and a half years.  Ava’s little springtime suit got me thinking about the other tadpoles in my life…and I came up with this little springtime ditty:

I am missing tadpoles today

drawn out and bright

It comes in waves

First the red squirrel and Magpie

Then moss peaking through snow

The swan and duck arrive

with the first buds of trees

And the mosquito starts to buzz

with the running of the sap

But I still miss the tadpole.

Spring is definitely a long process in Alaska.  “Breakup” takes weeks and weeks.  The dog tracks in mud and dirt every time she comes in.  Rubber boots are the chosen fashion for half of the state for the better part of two months.  The smells (maybe they should be referred to as odors?) that emerge are generally unpleasant.  Trash that succumbed to the wind is uncovered in yards and edges of roadways.  However!  The skies are generally bluebird and the sun is definitely welcomed after the long nights of winter.  Truly the only things I really miss about spring in Alaska are my little slimy friends. 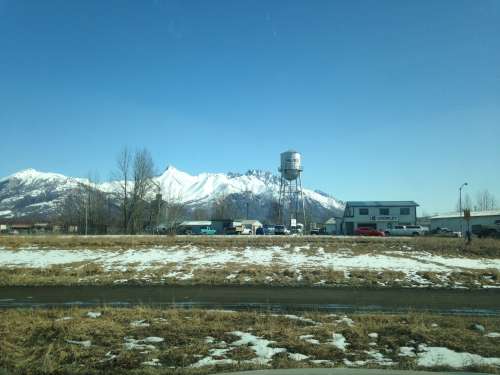 The Palmer Water Tower in the Spring.

Woke up this morning to a

After months of either

and refreshing to hear

creep through the old windows

that we are leaving soon.

The cracks in these same windows

let in dust, blown by the

the sun slanting its rays

beyond the overgrown honeysuckle,

through the old window panes,

across our chilly feet.

Feet that wait to start the day

from the warmth of our bed.

The rosemary in the window

It smelled of Christmas

in front of the window.

the concentration of sun

Staring at the snow

wool socks from our feet.

and the window will

not see the sun

that lets in all things.

Spring is a very inspiring time for the artistically minded.  With the interim between the melting of snow and the establishment of green, everything is laid bare.  We have nothing to hide behind.  Our stark yards are visible for all to see.  The bows in front of our windows do not yet provide any privacy.  The sounds of nearby traffic and dogs barking are clear and close without any snow or leaves to muffle the sounds. 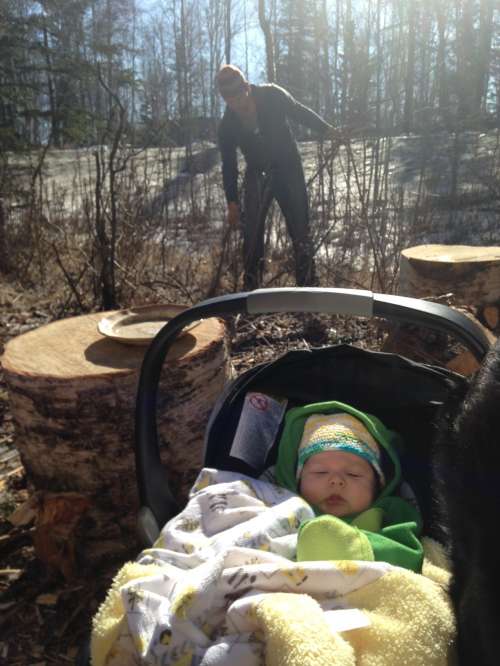 Cleaning up the yard after the long winter 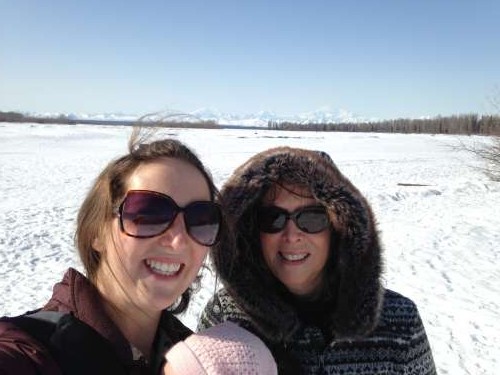 My mom visited! and we took a sunny, snowy springtime hike in Talkeetna. Denali is visible in the background. 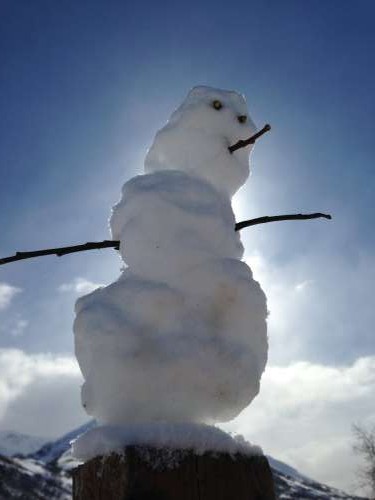 Snow people still exist in Alaska during all times of the year, depending where you look.

I get a lot of inspiration from nature and the elements and have always enjoyed the poets of the Romantic Era: Wordsworth, Blake and Coleridge as well as more contemporary poets who reflect on the awe, beauty and simplicity of nature and our sometimes confusing place in it all like Mary Oliver and Robert Frost.  Many people do not like poetry, and I kind of understand this.  It can be convoluted and snobbish, yet it can also describe a moment perfectly.  Sometimes, poetry seems to be the only vehicle that can precisely sum up a feeling or event.  Poetry can pack a lot of meaning and energy into just a few words and line breaks when properly executed.

Did you know it was National Poetry month?  Any poems you want to share with your fellow farmgirls who are waiting to get their crops growing?

I hope this spring is great for all of you!  Here’s to the greening of things!