“Silence is a source of great strength.” Lao Tzu

“Silence is a true friend who never betrays.” Confucius 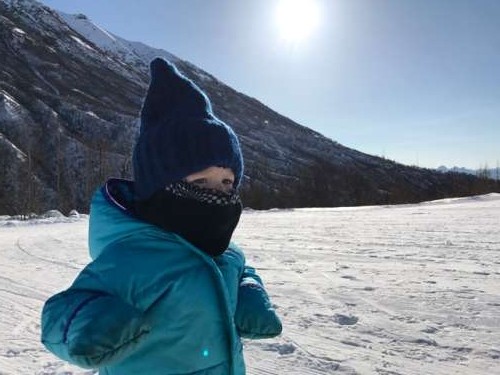 Finding silence in the snowy mountains.

Last week I had the pleasure of going on a quick backcountry ski tour—just me and my pup, Moki. It was such a treat.  I hadn’t gone backcountry downhill skiing (or any downhill skiing, for that matter) since well before Opal was born.  I’ve been downhill skiing since I was three, so it’s kind of ingrained in my epigenetic DNA.  I long for it when I haven’t gone in a long time.  I miss it like a long lost friend.  (If you are unfamiliar with backcountry skiing, there is a long winded explanation at the end of this post!) 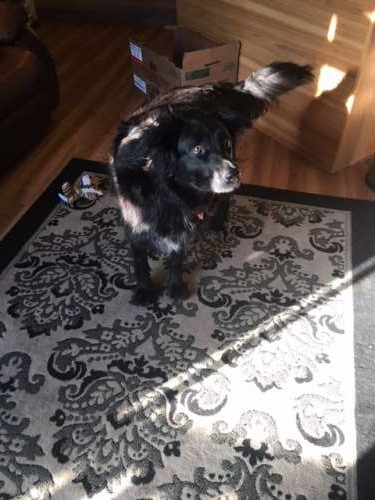 My family and I went out on a beautiful blue bird day for some sledding, and Moki was being obnoxious (also known as her normal self!).  I took her on a quick lap around the nearby low angle ski area where I felt safe skiing solo.  We set off, and I started breathing heavily very quickly.  I “skinned” (climbing uphill on skis) along, the first and only tracks, happy to be out on a lovely day.  I stopped every once in awhile: first to remove my gloves, then my jacket, then my hat.  Phew! I was getting warm!  As I continued to climb in a t-shirt and leggings I noticed more and more the seemingly deafening volume of my breath.  I paused and said to myself: C’mon! what’s with the heavy shallow breathing?…take some deep breaths and calm the heck down. So I paused and slowed it down, and was suddenly struck.

It was beautiful and powerful.  There were no voices, no passing traffic, no children shuffling around, nothing.  It was so striking that I thought to myself, “How long has it been since I experienced total silence?!”  I still don’t know the answer to that question, but I’m guessing over a year…maybe even since before Ava was born, perhaps longer…I’ve gotten very good at tuning out any non-necessary stimuli.  I think it was this sudden lack of tuning out that took me aback.

Then I was struck again—there are some people who probably never truly experience silence.  I think in some ways, natural silence is a privileged thing to experience.  Many people are born in and die in cities, rarely venturing abroad or into nature due to socioeconomic or other factors.  A city is never silent.  There is constant traffic, constant movement, life and living and the sounds that go with it are never gone.  Even in one’s home the refrigerator is always running, the heater or air conditioner or fans are humming away, the boiler spits and clangs, the floors creak, the kids chatter, the mom sings, the dad snores, the dog whines, the fish gurgles.  It is inescapable.

In the light of this thought, I was immensely grateful.  I reveled in it.  It reminded me of the sparks I felt in my first awakenings in nature.  This is my church, I thought.  This is my solace and reprieve.

When I got as far as I was willing to go before turning around  and skiing downhill, I stopped, took off my skis, sat as comfortably as I could in ski boots and was still.  I closed my eyes, relaxed my body to the best of my ability and basked in the silence of the snowy hill.

It was the loudest silence I have the memory of experiencing. 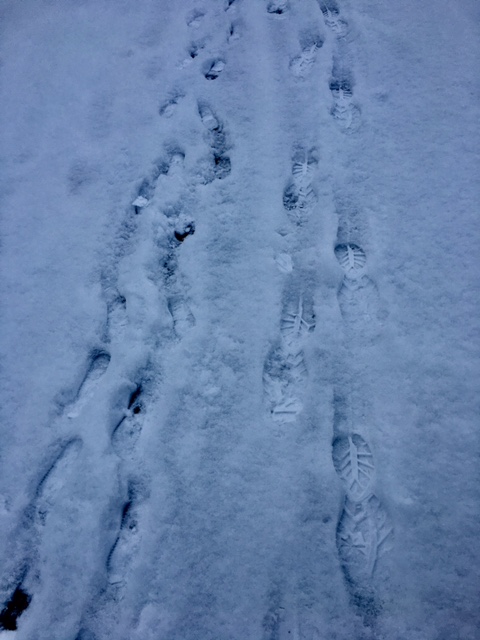 Eventually the birds nearby started to chirp, and I heard the faint buzz of a snowmobile in the distance.  However, I can still feel that absolute calm that I experienced, albeit briefly.  One of the best parts of this excursion was that I forgot my phone.  I couldn’t, even if I wanted to, check to see if I was needed.   I couldn’t take any photos (which I would have because it was SO beautiful).  I couldn’t post a super sweet selfie with the gnar pow to Instagram (not saying I would have done this one!). I was alone on a mountain with my dog overlooking a mountain valley that I love like the land I grew up on.  I knew that my adorable family was happy and safe, just beyond my line of sight. 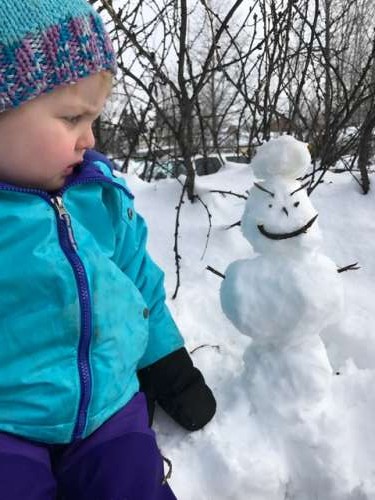 Ava is skeptical of her new friend.

It is now more than a week later and I can still feel the whole body experience that was afforded me from just a few minutes of silence in the mountains.  Oh, how I took those experiences for granted in the past! 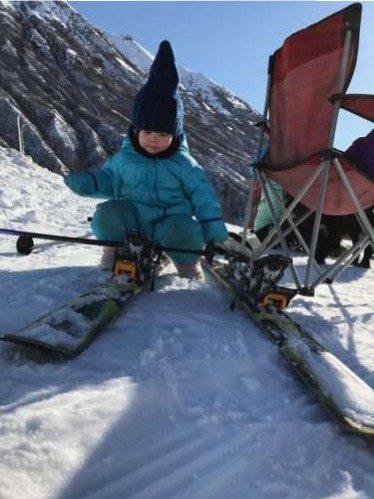 As I write this, it is the evening of the vernal equinox–the first day of spring.  Nearly everyone I know is in the manic state of unfocused doing.  We are swimming with ideas and hop from one thing to the next, often feeling like the red queen–running in place, doing so much but accomplishing nothing. In reality, of course we are making strides towards what needs to be accomplished…but the progress often isn’t very perceptible.  Seedlings are sprouting, snow drifts are clearing, workers are being hired, and schedules are being filled with the potential for great growing seasons. 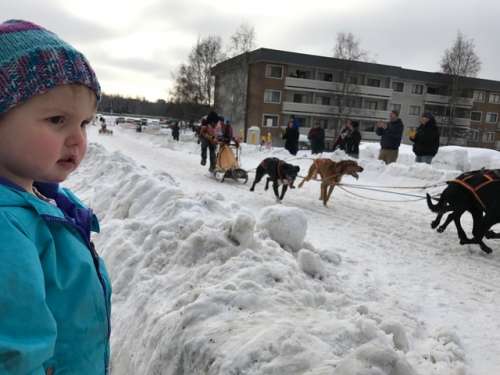 The running of the Iditarod is one of the last hurrah’s of Alaska’s winter.

Even in my stay at home mom gig, I hop from task to task and have to remind myself to STOP! once in awhile.  I start off the day relaxed and focused, and by three or four o’clock I’m in such a tizzy I don’t even know what I’m doing!  It’s amazing what a drastic increase in sunlight over a short period of time can do to one’s state of mind (we are gaining nearly six minutes per DAY! Forty minutes per week!).  We are slaves to circadian rhythms if nothing else, amiright? 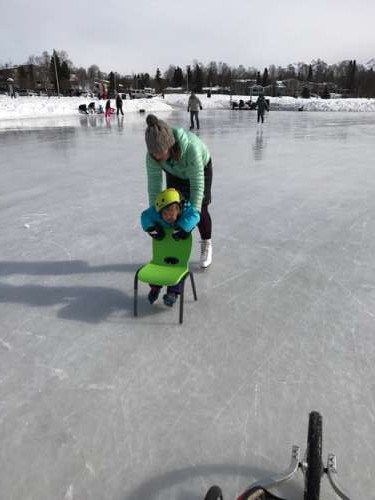 So, now I have a tip for you, especially if silence or solitude seem like a very distant possibility and you are one that needs those things to help you reboot.  It is a quick practice that has helped me greatly over the last few months (it was a difficult winter for me and many others, I’m sure).  It is a quick “meditation” of sorts that I got from one of my herbalist doctor inspirations, Aviva Romm.  It is easy and effective: Breathe in and say to yourself, “I am” breathe out and say, “at peace.”  Breath in “I am.” Breathe out, “At peace.”  It’s like a reset button for those times of, what am I doing again? It’s also supremely helpful when your children are whining about who-knows-what for the umpteenth time today…at least that’s what one of my friends told me, my children are perfect angels who never cry or complain ;). 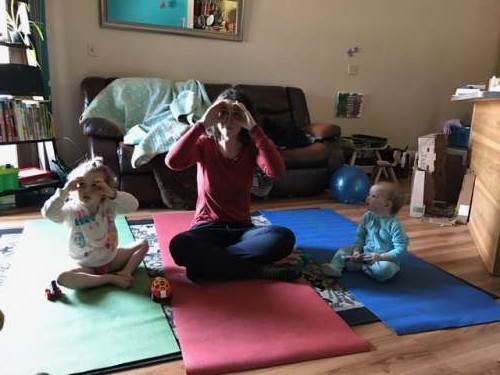 Family reboot with some yoga!

Now that I am more familiar with the rejuvenating effects of experiencing a few moments of true silence, I will seek it out more often.  Do you love silence or solitude or stillness?  If so, where have you experienced it?  Do you have any memories of being taken aback from the lack of stimulus in your environment?  We’d love to hear about your experiences, and perhaps be further inspired to seek these things out ourselves! 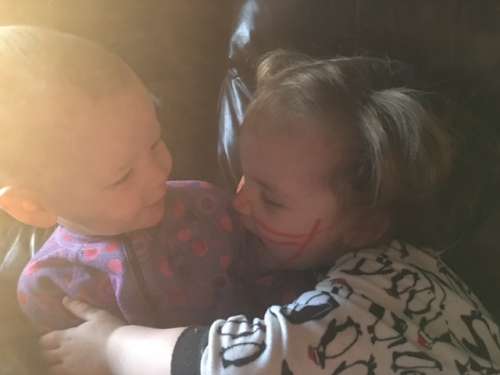 I just love this photo. So mjuch love, so much light.

In silence and spring preparation, until next time..

P.S. For those of you who are asking, “What the heck is backcountry downhill skiing?!?”  Here you go!

I started backcountry skiing when I moved to Alaska.  This kind of skiing is done without ski lifts, without tow ropes, and without any lift tickets or other monetary transaction beyond buying your set-up and the gas it takes to get to your parking spot.  My ski set-up is, as I like to say, “janky.”  It is all second (or third or fourth…) hand.  Backcountry skis have special bindings that can release at the heel to allow the wearer to trudge uphill.  There are little “risers” that help keep your foot at a more efficient angle vs. the slope of the ascent.

The only new things I have are those that really matter: my avalanche beacon and climbing skins.  An avalanche beacon sends out intermittent signals that can be picked up by other avalanche beacons should I or someone else, God forbid, get caught in an avalanche.  Climbing skins are strips of fabric that have glue on one side to stick to the bottom of the ski.  the other side has fabric that allows the skier to slide forward but not back—enabling the skier to (very slowly in my case) climb uphill to where she will remove the skins to ski down. I generally also carry an avalanche shovel and avalanche probe…this are used to test snow pits to monitor snow conditions and avalanche risk and also to rescue someone should it be needed.

So, to go backcountry skiing we first check avalanche conditions, then trudge up a mountain, then enjoy the view for awhile and ski down.  Repeat until legs feel like Jello.