When I Dip, You Dip, We Dipnet

There I was, standing chest deep in the ocean, wearing children’s waders and getting beaten by huge waves that poured over and into the neoprene legs and booties.

There I was a week later, several hundred miles away from the previous spot, slip sliding through mud, again wearing children’s waders, trying futilely to rinse the silty, thick muck from my arms and clothing

There I was 36 hours later squatting on a muddy grassy lump (again in children’s waders), feeling my thighs burn while cigarette smoke from a woman nearby wafts into my nose. 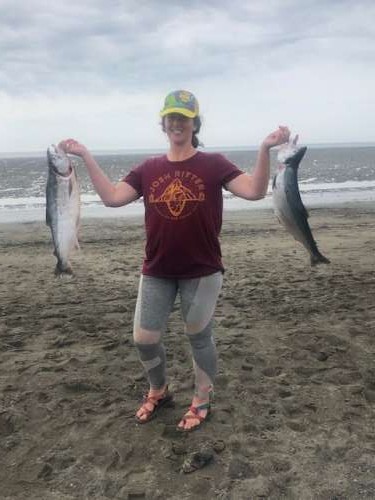 Now, here I am, at home, with a sore body but also with a freezer full of beautiful Alaskan sockeye salmon fillets and another 12 fish to process. I caught all of them in a freaking net! How cool is that?

Claiming to be a fisherwoman would be a loooooong stretch for me. I grew up lake fishing once in awhile in Minnesota. Truthfully, it was always a bit boring to me. I’d end up reading or writing poetry in the boat, tired of watching my little white and red bobber that never seemed to bob. Plus, I didn’t like to eat fish! Even through college and young adulthood, I had plenty of friends that liked to fish but I never got into it. Again, I would go along to be on the water in beautiful areas, but I’d always have a book and a journal. I was fishing for thoughts or something, right? 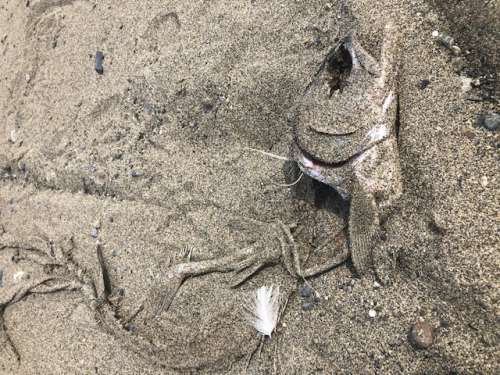 There is something poetic about this fish carcass…sorry if you don’t agree!

Since moving to Alaska, I’ve gone fishing a handful of times—the first time going on a halibut charter with my dad. It was thrilling and beautiful and rejuvenating! After that trip I thought to myself, I could be a person who fishes. All I needed was a forty five foot yacht, a handsome deckhand to bait hooks, maintain equipment and clean fish, and a captain to drive said boat. Not too much to ask? 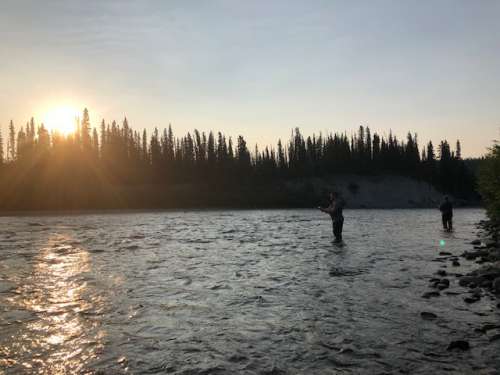 A paid charter can bring you to some beautiful places, like this 5 a.m. spot on the Gulkana River.

Earlier this summer my dad visited and we went on another fishing trip—this time to hook king salmon on the Gulkana River, a tributary of the Copper River, where world class salmon are caught and shared with the world! I hadn’t used a rod and reel in a LONG time, but luckily we again had a guide who had really nice fishing poles and taught us how to use them. My dad got a 25 pound beautiful king pretty early on in the trip, so that was encouraging; however as the day progressed I was convinced that I wouldn’t catch a thing. I did lose one fish, but in the end I didn’t get one. There were a couple hours in there where I reverted into my old “fishing” habits, saying to myself I wish I had a pen and paper to write poems….I wish I had a book to read all the while furiously casting and reeling in line after line after line after line. My thoughts were turning toward this is the most expensive sunburn I’ve ever gotten…Why in the world do people fish for fun?….I’d rather be doing anything else with my time right now. The negative thoughts faded very quickly after eating some food, but the longing for writing or reading stuck. In the end, it was a lovely day on a lovely river and a great adventure with my dad. Plus, we had king salmon for dinner! 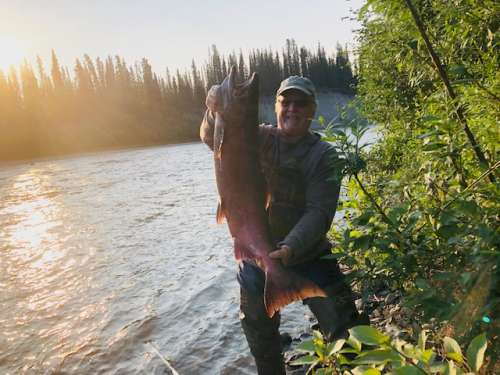 My pops with his king!

Again, after the salmon trip, I thought, I could be a fisherwoman. Our guide gave us really good pointers about the behaviors of salmon and other fish. Now I was intrigued! Maybe my grandpa and others shared their fish behavior knowledge with me as a kid and I just didn’t care; but I bet we just went out fishing and didn’t really talk about the why’s and what’s of fish habitat. As a dirt worshipping nature lover, this is what I found hooked me on the idea that fishing is, in fact, not just for suckers. Maybe I could give this fishing thing a try.

But, first I just wanted to get a lot of fish. 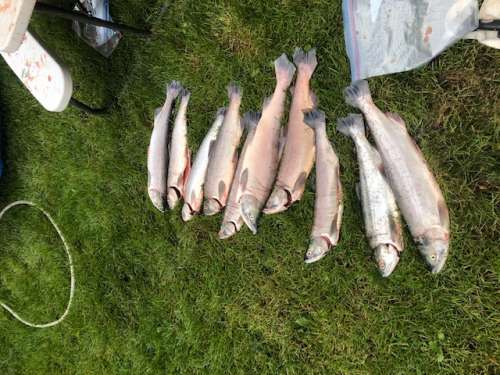 Let’s take a step back here—it’s been awhile since I’ve written! One of the reasons I’ve missed posts is just a general sense of overwhelm in our day to day right now. It was a rough first half of this year with loss and not getting jobs that I’ve really wanted because I’m not willing to work full time. I’m not working on the farm this year because I couldn’t justify childcare and getting work done with them in tow is incredibly stressful and inefficient (it would be different if it was my own operation) and just the general exhaustion of having three young kids is enough. I was starting to feel pretty worthless. I know, I know I’m doing the world’s most important job or whatever, but that doesn’t hold a lot of clout when your down and out and live in a time and place where money is king and worth is often calculated by your salary. My logical brain knows that what I’m doing is important, it is finite, it is magical in many ways; and I am so SO lucky to be able to stay home with kids. So, I’ve tried to focus on ways that I can provide for my family outside of endless dishes and piles of laundry (and also beyond the fairly consumptive activities to enrich childhood!). 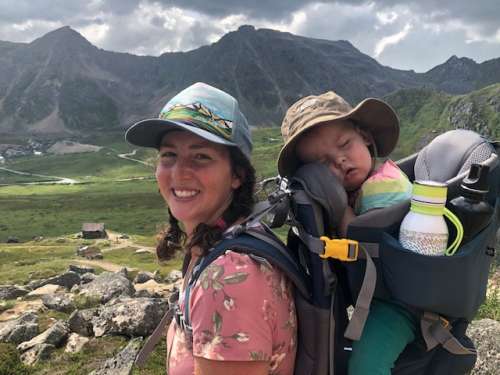 How I love these days with my babies.

We planted a fine little container garden with tomatoes, zucchini, sweet peppers, kale, cucumbers, potatoes, strawberries, herbs and a few other yummy things. I intended to also get out some peas, carrots and other greens; but it didn’t happen, and that’s okay. The are all doing quite well!  This was all great, but I wanted to get some protein into our rotation, and livestock isn’t an option with our current rental situation.  So, I turned to the sea!

Dipnetting is a method of catching fish without a rod and reel. You literally just put a net in the water, wait for a fish to get caught in it, drag it on shore, dispatch the fish and continue! My friend, Amanda, is my adventure buddy. Earlier this summer we went on a thirteen mile adventure run, crossing hip deep frigid rivers and bushwhacking through miles of unkempt trail. It was awesome! Last week we ventured four hours south to the mouth of the Kenai River. We got our tent set up at 2 a.m. and woke up at 6:30 to stand in the beating waves with other Alaskans. It is a fascinating cultural experience! A bunch of people standing in nearly arctic waters, staring out at the water, side by side, cheering other dip netters on as they flip and drag their huge five foot nets on the end of 10-20 foot poles to shore. It was my first time and I felt that familiar you aren’t going to catch anything pull on my brain as everyone around me dragged in fish after fish. One of the guys next to us pulled in at least six fish before I got my first one. 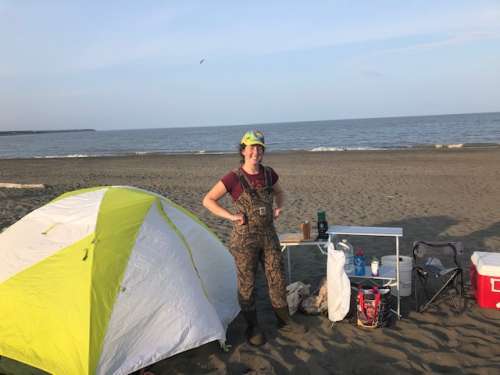 Our fish camp in Kenai. Didn’t get to sleep much in that tent, but it was cozy!

But my first one came! And then another and then four more. Not too shabby for a first timer, I think (for perspective the guy next to us who obviously knew what he was doing got 35 fish in the time it took two of us to get 11!) . The fish were pretty big, 10-12 pounds and beautiful silver with bright red flesh. Dispatching them isn’t pretty or easy, but I got the hang of it. I always say thank you and sorry to the fish before I whack them….Other people who heard me must have thought untoward things, I did hear whispers of “mumble mumble soft these days mumble mumble.” Ha! If being reverent and grateful for your food makes you soft, I’ll take it. We could only fish one tide before we had to head back north, but now we know what to expect for next year. 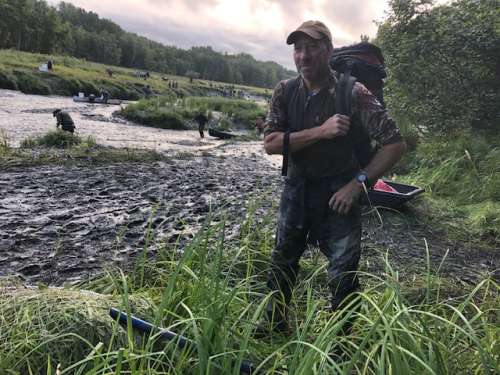 Fish Creek mud. We got 24 fish between us in an hour!

This week I’ve been fishing on Fish Creek which is about 45 minutes from my house. It only opens to dip netting when a 35,000 fish escapement is projected. This year it was only open for five days. One morning I went and caught eleven fish in an hour and last night I went and caught two fish in three hours. The best part of last night was watching a guy next to me lose fish after fish after fish. He lost several after he had them landed and they squirmed back into the water! Amazing. He finally caught a fish that didn’t get away and it was the smallest salmon I’ve ever seen (it might have been a trout?). Really hilarious to watch, probably not great to be him. It is a variable life, this life as an outdoors-person (which I wouldn’t consider myself…yet)! 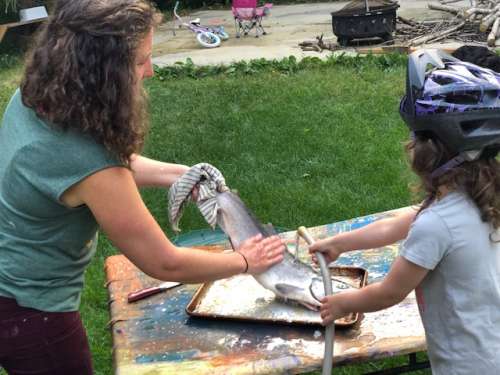 Fishing can be a family affair. Thanks, Opal!

So, we’ve gotten nineteen fish, mostly sockeye (also called red) salmon. That’s probably plenty for our family, but I’d love to get more for parties and gifts. Alaskans are allowed to get 25 fish for head of household and then 10 more for each additional member in their household. Sooooo, that means we could get 46 more fish…which seems excessive and definitely impossible with our time and resources. However, I’ll go one more time next week at the mouth of Kasilof river. Hopefully we’ll get a couple more to round out our catch. 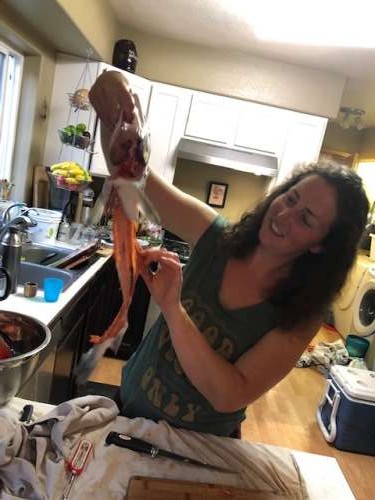 I’m getting better at processing the fishies. I will use as much of the fish as I can and bury the carcasses under trees or the bottom of the compost pile. So many good nutrients in there!

I’m looking forward to all of the yummy dinners, fish tacos and ceviches in our future. I’m equally excited to learn about smoking and canning. My friend also gave me a super easy method to make lox. Gotta love lox and bagel, smoked salmon, salmon dip…mmmmm.

Until next time Farmgirl friends, Take it easy!

Sending Peace and love from Alaska,