You can’t get too much winter in the winter.

I recently sent my mother a picture of the view out of our living room window. It showed a tall spruce heavy with what appeared to be snow, but deciduous trees in the background were also coated in white. She replied, “You are positively flocked!” I had NO idea what that meant, so had to Google it. She was, as I’m sure many of you know, referring to the artificial Christmas trees that look like they are covered in snow or frost. I also learned that “flocking” means sticking little bits of fiber to a solid surface with glue…like those little hard animal figurines that are fuzzy. Supposedly flocking goes back to 1000 b.c.  #themoreyouknow.  Back to the real stuff–it’s been occurring since the dawn of hydrologic cycles and sub-freezing temperatures. Take that early civilization! 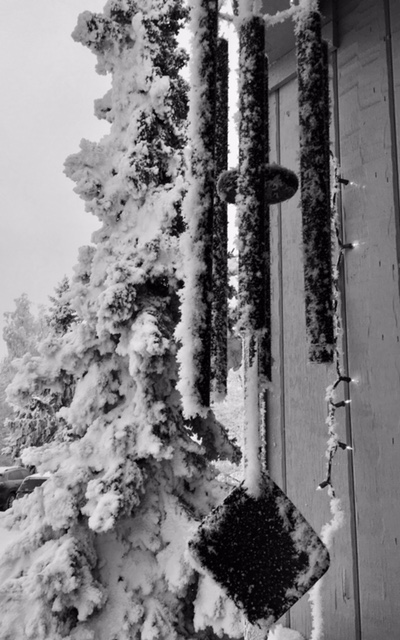 A sometimes Frost Chime…taking a break from the wind.