One Good Thing About Music

“One good thing about music, when it hits you, you feel no pain” ~Bob Marley

This has always been one of my favorite quotes; and I am proud to say that I regularly listen to Bob Marley’s hopeful–yet often melancholic–tunes.  Music is important in our yurt.  It is often playing or being played.  Music helps make chores easier, car rides more fun and naps more productive.  Evan plays the guitar and sings (he has been accused of having the voice of an angel, before.  It’s true). Evan and I have fairly frequent and playful arguments about our music preferences.  I have a feeling that Ava (and any other children that come along) will either be a total music snob or rebel and have atrocious music taste (atrocious according to me, of course!). 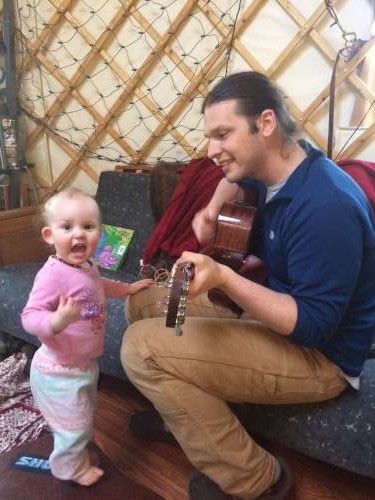 Ava and I are treated with live music multiple times per week!

My love for music spans many genres and time periods, but I tend to turn to bluegrass, folk and classic rock.  On my computer’s iTunes, the bands with the highest number of plays are Elephant Revival, the Avett Brothers, Bob Dylan, Led Zeppelin and Rush (I think Rush is a result of Evan listening to music off of my computer!).  Raffi is quickly making his way up the yurt’s play charts, as well. I have been nannying for a couple of grade school girls over the last few months, so I’ve ended up listening to enough Taylor Swift to last a lifetime.  Elephant Revival has been my favorite for years (one of the leading ladies rocks the washboard!).  I listened to them for much of Ava’s very long labor, and I try to share them with anyone I can! There are some excellent free songs streaming from their website if you have time to give them a listen. 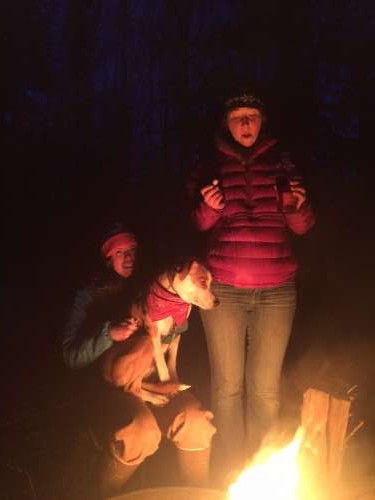 Elephant Revival is great campfire music. This is a shot from a camping trip two weeks ago with good friends!

When I first started farming, I had visions of what my future farm would look like.  One of the bonus amenities I pictured was large speakers with a reliable stream of tunage.  I imagine that I’ll have worldly, progressive farmhands working for me who bring music with them that will continue to open up our musical horizons.  We will craft the perfect playlists to listen to while doing the most common small-scale organic farming/gardening tasks: Stall mucking, transplanting, pea/spinach/tomato/other delicious produce harvesting, CSA packaging, and we must not forget the most common and necessary–weeding!

Now, I see that there are times when recorded music is overbearing and takes away from a task.  Sometimes the sound of a spade in the soil, birds flying over head, cattle mooing from the pasture, and the breeze whistling through a gap in the greenhouse door is the best music one can hear.  Furthermore, there are times when singing a tune can make the most monotonous work bearable. 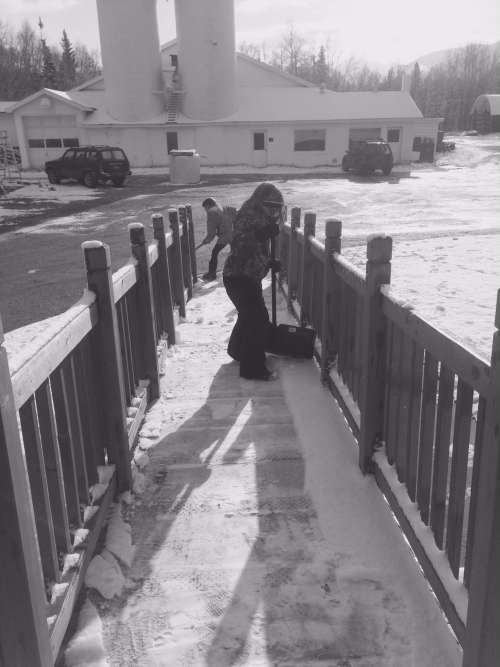 The sounds of helpful kids shoveling April 21 snow is music to my ears!

I remember clearing an acre of land in Costa Rica eleven years ago.  There were eight of us in the crew and we cleared it using only hand tools (and machetes!  I need to get me one of those…).  It took the better part of two weeks!  We ended up singing many labor songs, often to the tune of “Hi-ho, Hi-ho, It’s off to work we go.”  We would create verse after verse, trying to give everyone a chance to add in whatever form of torture they were experiencing.  This reminds me of labor songs that must have kept many willing and unwilling farmhands sane while toiling away in the hot fields.  In the same vein, I think of people on chain gangs, rowers on huge ships and the other physical laborers singing and chanting together. Music, even in the worst and most trying of times, provides solidarity, escape and sometimes even JOY! 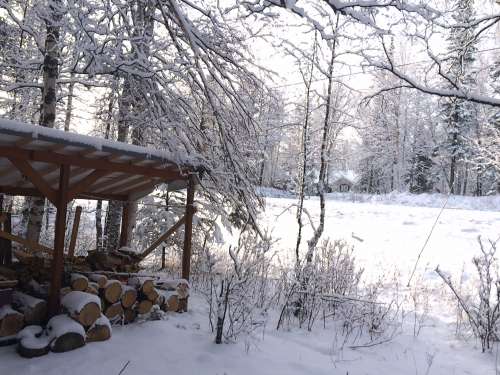 MORE April snow makes me turn to the music that makes me happiest: Led Zeppelin.

These days, I like to sing whenever the mood strikes me.  I make up songs about my animals (“Her name was Moki! Moki! Moki! Cooler than all the dogs…”), Ava (“Her name was Ava! Ava! Ava!/Silliest baby around”), Evan (“His name was Evan! Evan! Evan!”…do you see a theme here?), my students and the kids I take care of.  I’m not creative enough to craft an entirely new song, so I just parody tunes I know.  I’m a fairly terrible singer, but I’ve gotten to the point in life where I really don’t care what others think of inconsequential things like my singing voice. 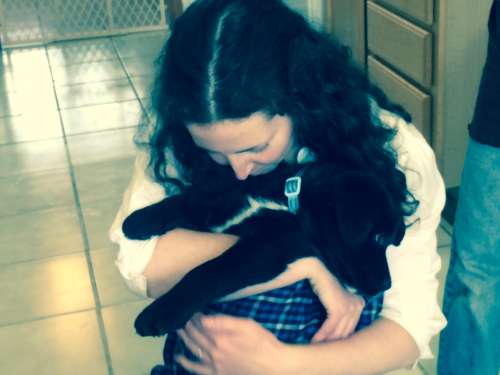 I cannot help but sing songs about our furry friends

When I was younger, I spent nearly every cent of disposable income I had on live music.  I would go to concerts, on average, three or four times per month.  Moving to more rural areas was hard at first.  What would I do with my free time? Now that I have a child, the idea of going to multiple concerts a month is kind of absurd, so it’s good I made that transition before Ava came along.  The music scene in Alaska isn’t that great, and most nationally known shows tend to sell out very quickly to people that aren’t even very big fans.  It’s such a luxury to see great live music that people will go to see just about anything!

Evan and I had the pleasure of seeing Moscow, Idaho’s own JOSH RITTER last Saturday.  It was a fabulous show in a new theater at the local community college.  One of the perks of music out here “in the valley” is that the venues are small so the shows are intimate.  The last time Josh Ritter played here (two years ago), he played in a local coffee shop with about fifty people!  How many people get to see fairly popular musicians in that kind of space?! 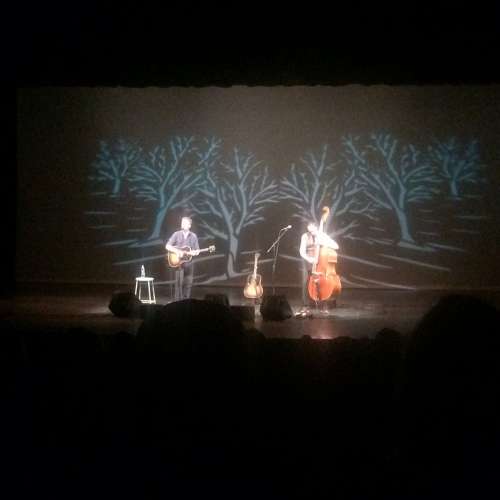 Josh Ritter at the Glenn Massay Theater in Palmer, Alaska.

Josh doesn’t sing about farming, per se, but he is a modern folk singer that would appeal to any Farmgirl, I’m sure.  Some of his songs harken back to classic folk characters like Stagger Lee, but he also has crafted tunes about a woman falling in love with a mummy that has come back to life, men lamenting the problems in the world when their loves have gone to war, and some star crossed lovers who find love waiting to push a warhead button to start WWIII in a missile silo, among many other themes.  His voice is soothing and enveloping, his rhythm is flawed, and he definitely has some Farmboy charm. (Check out those two links, I think you’ll like his music a lot! He also did an NPR Tiny Desk Concert a few years ago check it out here, and another live NPR concert that is streaming here). 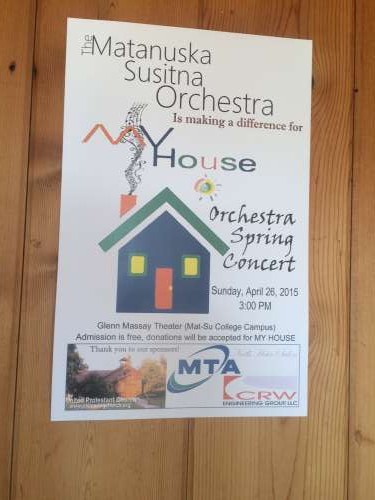 Another music opportunity in our community! Ava’s first orchestra?

Do you have any Farmgirl gems?  A new season is upon us and some new music is in order!  I will start my farming gig next week, and some new (new-to-me classics definitely count!) music to share with my co-farmers would be great! 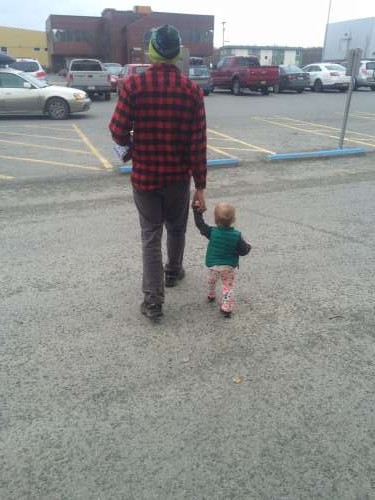 I just had to share this sweet photo. Our good friends Bix and Emma left Alaska last week, and this is “Uncle” Bix walking with Ava for the last time in a long time. Sad Face. Perhaps I should parody a song for this moment.

“To succeed in life, you need two things: ignorance and confidence.” 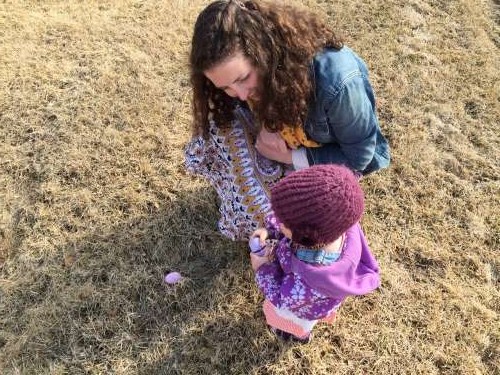 We found an egg, success!

I made it forty days and forty nights with very few sweet treats.  It was hard at first.  After a couple weeks, however, it was easy and felt really great!

Even though I ate a few things here and there, I was definitely not bingeing on cookies, sneaking brownies or scarfing down chocolate during stressful times.

We have been eating more fruits and veggies and dabbling in alternative “sweets” (I’ve included a recipe for butter mints at the end of this post!).  I’ve been sleeping better, feeling more energetic and saving money, to boot.