A Thimble’s Worth of Advice 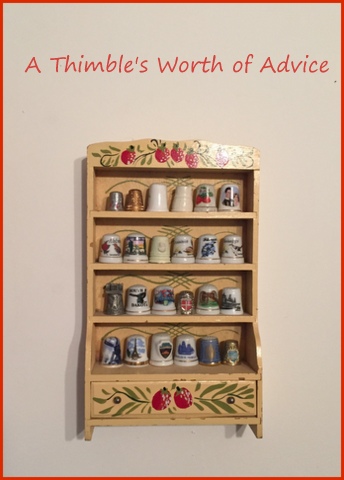 Some of the best things in life are also the smallest! A hopeless collector, I adore thimbles! I’ve picked thimbles up as inexpensive souvenirs and at flea markets. However, I had no idea that one day a chance meeting at a tag sale and a cigar box of thimbles would lead to a surprise and a life lesson!

Protecting the fingertips from injury during sewing, thimbles have been used for thousands of years, even found among the ruins of Pompeii. Utilitarian in purpose, early examples were made from leather or bone. The first-known metal thimble, made in the late 1600’s, was called a “thumb bell”. Thimbles were later made from all sort of material – from ivory to silver (which is soft and resulted in needle-pricked fingers) to porcelain, plastic and more. Before, a thimble would’ve been found in every home (along with a rolling pin and well-worn apron); some people today don’t even know what a thimble is! 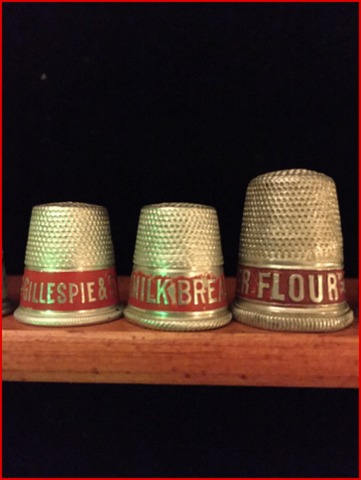 Thimbles were often a promotional “give away”, like these early metal ones… 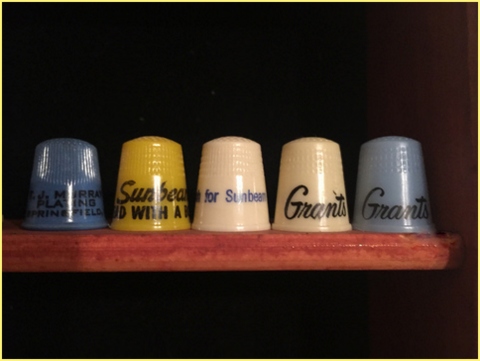 …or these plastic ones. 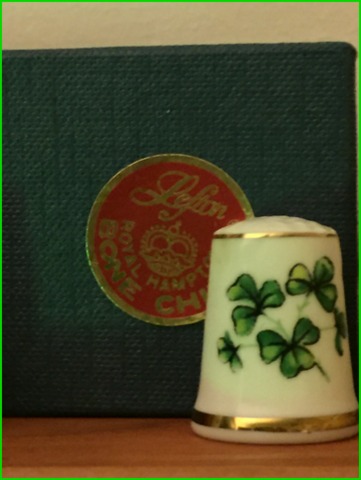 A bone china example from a favorite vintage company, “Lefton” 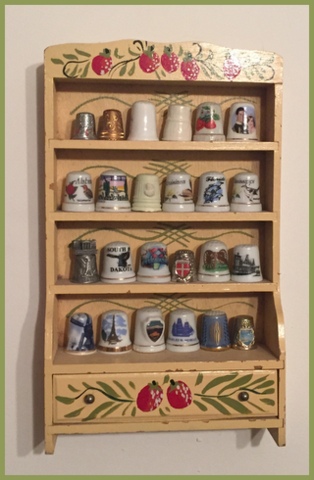 I remember shopping with Daddy for that special Mother’s Day, 1970-something, at a local gift shop, owned by the nicest, always-perfectly-coiffed-and-perfumed shopkeeper who loved to chat with all her customers. She knew them well, and could suggest perfect gifts for each. I was thrilled to present Momma that little wooden thimble rack, hand-painted with strawberries, complete with a matching strawberry-painted thimble. We’d add thimbles to it on road trips, mostly to the Texas hill country. 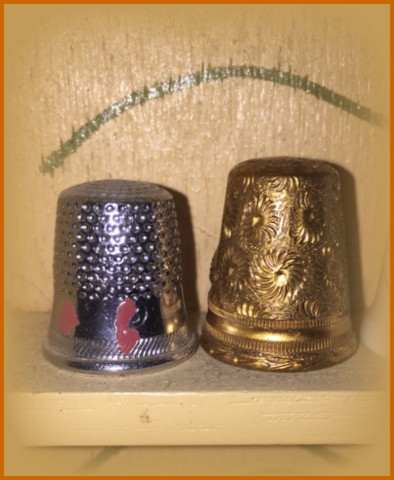 The thimble on the left is from my mom – it has her nail polish on it from when she was in a high school home economics class in the 1950’s! The one on the right we picked up in the 70’s in New Braunfels, TX at a German restaurant/gift shop. 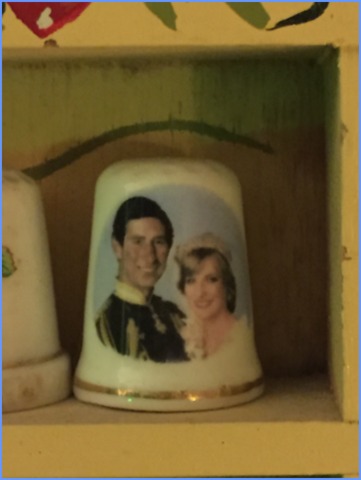 Another one from the early 80’s from England 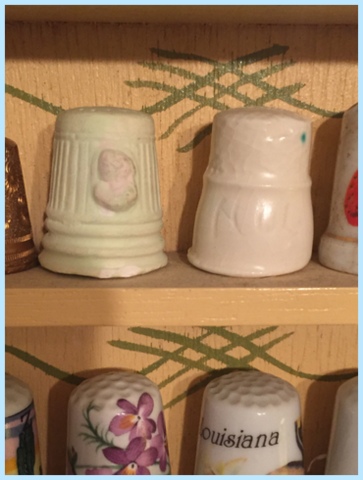 I made these two (top shelf) that my mom kept on her thimble rack when I was around seven in a ceramics class. Raw art there!

Later, when I took up sewing as an adult, Momma gave me the rack and thimbles she’d packed away years before. Not very large, it couldn’t hold all the thimbles I had, so some stayed tucked in a drawer.

From some of my travels through the years… 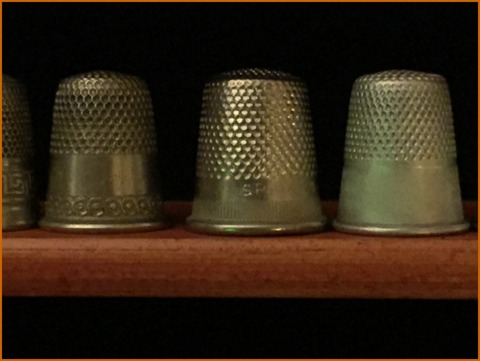 Fun to find at flea markets, thimbles give clues to their age. Rounded tops are older, while flat-topped one are more “modern” 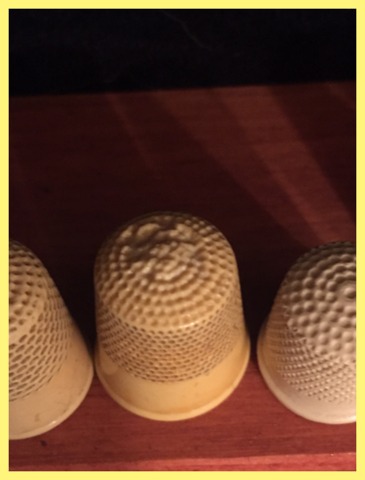 This bake-lite thimble top shows years of use.

Awhile ago, my  guest/sewing room had become messy with my tools and patterns. One day, I noticed an old, dusty little sewing cabinet for sale on an online tag sale. Just what I needed to get my sewing supplies organized and out of the way of guests, I decided to purchase it.

Ever met someone and “connected” immediately? The seller was lovely – an empty-nester who was downsizing and soon embarking on an out-of-state move. The sweet little cabinet just wasn’t something she could take with her; she was happy I would put it to good use. We chatted on and on about how hobbies like sewing were disappearing nowadays. She told me about her beloved mother, whom the cabinet had once belonged to. Her mother was a very talented lady with a giant smile that I know I would’ve enjoyed meeting, as well.

After polishing it and organizing my notions, I later texted the sweet lady a photo of the cabinet, thanking her again for selling it to me. Before moving away, she then contacted me, asking if I liked thimbles. She had some of her mother’s and thought I would like them, so we met up once more. Chatting again, I was sad my new friend was moving. 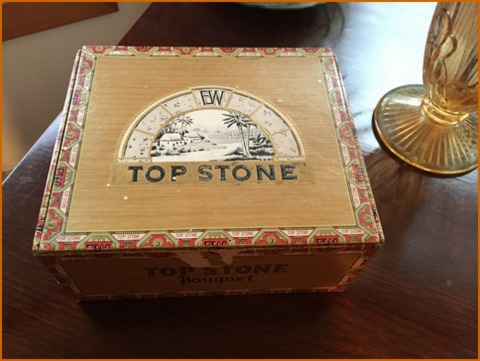 At home I unwrapped the thimbles, meticulously packed in a cigar box. I was amazed at all the different thimbles…so beautiful. It was then I noticed paper inside some. Unfolding the slips of paper, I was touched by the sentimentality of the lady who they’d once belonged to. There were little notes about where she had acquired her thimbles. Some were from trips, others gifted to her like the one whose yellowed strip of paper reads, “Old – from Mom’s friend”. 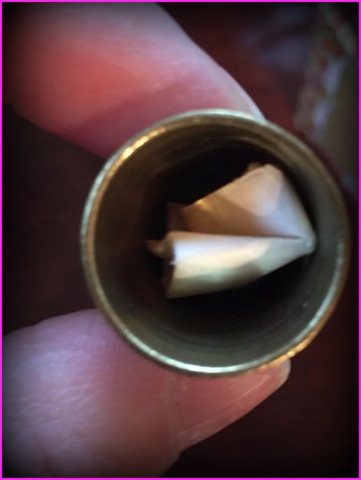 Notes like this were tucked inside many of the thimbles. 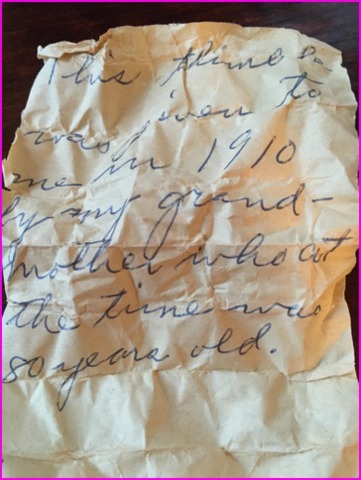 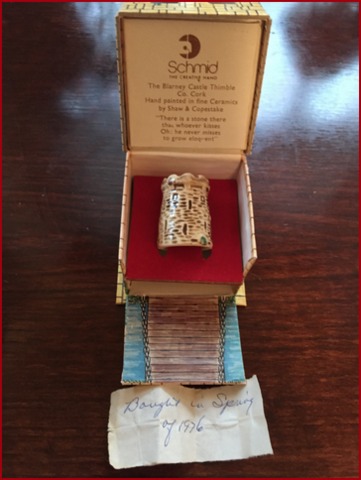 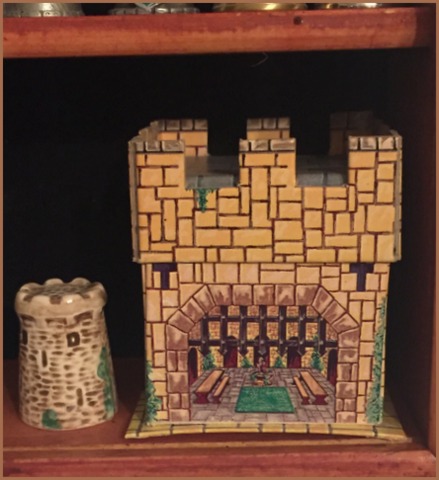 This unique “moat” thimble has its own castle!

For awhile, I kept them all in the box, until I found the perfect little velvet-lined hanging shelf that I fixed up and stained, to hang next to the rack from my childhood. With them, I put all the thimbles I’d collected through the years, as well. 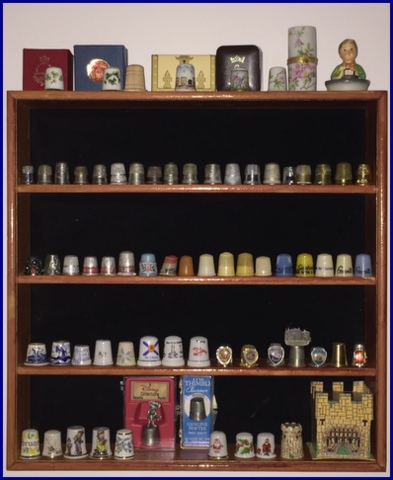 The little velvet-lined shelf was in disrepair that I found for $2.00. After fixing and staining it, I found it perfect to hold thimbles!

I feel a kinship to the lady who had liked to do many of the same things I do now, who was so sentimental she tucked notes like hidden treasure in her thimbles. She inspired me to go back and put little notes in as many of mine as I could. A recent addition to my thimbles is from Washington DC. It’s note reads, “Acquired as a parent chaperone on the fun Eighth Grade field trip with Newtown Middle School, April 2016.” 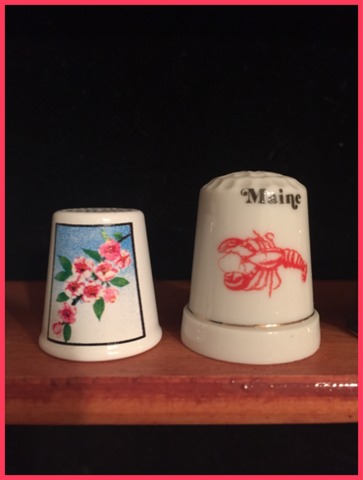 Two thimbles from trips with my daughter the past year now hold their own notes.

I love sewing at my sewing machine, and glimpsing at the thimbles on the wall.

No longer just “souvenir thimbles”, I’m reminded life isn’t just “big” life moments. Some of the best, most special memories we hold dear are also the simplest times spent with those we love.