This is the story about a darling, dirty, long neglected camper and the daring and determined farmgirl who turned “her” into a glamper.

Meet my dear friend, Michele. She’s one of the most creative and industrious souls I’ve ever met. Kind to the marrow, can-do to the core, good to the last drop … that is Michele. She works the graveyard shift as an ER nurse. When her work week is over, she sleeps a day and when she awakes, she hits the floor running. Her home is fulled to the brim with primitive antiques and accessories, plus she creates as many more decorative goodies (like birdhouses) that make her home a cozy haven. Her decorative “bent” revolves around the seasons, holidays and her love of primitive antiques. Autumn is by far her favorite season, and it shows. The living room walls glow warmly, being a buttery yellow. Many accents are shades of mustard, pumpkin, persimmon, earthy browns … and then she’ll surprise you with accent colors that make things POP! In all that Michele touches, you can see the care-giver at work, even when she’s playing. Attention to detail, cheerful whimsy and comfort blend seamlessly.

Michele and her husband “flipped” their house about 5 years ago. This past spring, they began building her garden shed that looks for all the world like an old log cabin. Then, “it” happened. Every member of our farmgirl flock came down with the same disease earlier this summer. Glampitis. The only cure is to find an old camper and work feverishly on it until you begin to see light at the end of the restoration tunnel. Each of us found a vintage camper in quick succession … like BAM BAM BAM … like it was meant to be! Five of the six now have vintage campers. Via TLC and a lot of ‘elbow grease’, each old camper crossed over the rainbow bridge to Glamper Heaven. They’re reborn and livin’ large in the Promised Land … never to be forgotten or neglected again. Lisa is still in search of her perfect camper. She’s unwavering in her quest to find a silver-clad beauty. It is out there, waiting to be found. All she has to do is stay on the trail and it’ll turn up one fine day.

But, back to our story line. Anita was in high gear to find a camper. One day, while she and I were out & about doing errands in a neighboring town, she suddenly pulled over into a weedy lot behind a car dealership. There sat two, old trailer campers. Hmm, might they have potential and might they be for sale?? The turquoise camper was the ‘choice’ option of the two – it was an early 60s Shasta. But, it was trashed and filthy inside. However, Anita thought it might be worth the effort for the right price, so she trotted into the car dealership office to see if they knew who owned it and if it might be for sale. The owner was inside, but he said the camper was not for sale. Actually, Anita was relieved because restoring that camper would be a major undertaking. So, her hunt resumed and she found a camper the following week. It only needed cleaning, new paint and some farmgirl decorating. Now, fast forward a few days.

While Michele was out & about running some errands, she spied a camper in the back lot of a car dealership (Mm-hm) and decided to inquire within. Divine favor turned. The trailer was for sale. Guess which one it was. Yep, that was easy, hu? Why the man’s answer changed, we don’t know, but, for $75.00 Michele was soon to be looking down the barrel of a monumental project. Oh, and, she wanted to flip the camper in about two weeks – the timeframe in between her work weeks. By golly, she did it!! Her husband took care of the mechanical items – making sure it would be safe and sound. Later, he’ll paint it. He’s a mechanic by profession and his hobby is restoring vintage motorcycles and cars. Perfect-A-Mundo! In the meantime, Michele went to work on cleaning the inside. EeeeWwwwwwwwwww!! It was sooo nasty, ickypoopoo, rodent tainted, gross dirty … and in profound need of an eXXXtreme make-over. A 10 on the UGHly scale. Michele in her h.a.z.m.a.t. cape to the rescue!! Out came the face mask, rubber gloves, bleach, vinegar, tools, and every other needful item to clear & clean. At that point in time, she joked that working on it was like “polishing a terd.” Now, for the fun part: the before and after pictures.

[[[Note: The reason for the time-frame crunch for all of us to get our Glampers restored and road-ready is that we’re going on our first glamping trip this coming week. The other side of the angle is that we’ll be joining some new friends at our glampsite. More on that later.]]]

The “Flip This Glamper” Tour – Phase I. The photos in this collage were taken after the initial mucking out and first cleaning. The camper, at this point, was nearly cleared of all the ‘crap’ and trash. Michele said that getting the mattress out was a real wrestling match! :o)

Phase II: More cleaning ensued. Then, tearing out the old counter-top, prepping the floor for new tile, various carpentry items and repairs, paint, getting rid of the old oven & ice box, later finding and bringing home new ‘old’ replacements. All the while, Michele was dreaming of the day when the real fun could start … decorating day … the reward for all the hard work. She had it all planned out. The color scheme of the trailer (inside & out) would involve the original color of the trailer, turquoise, plus her love of autumn shades. Think bittersweet vine, newly turned fall leaves, asparagus berries, pumpkins & gourds, rosey skinned apples. Now, add denim blue, dark shaes of wool and vivid turquoise. Poppity-pop-pop!

The afternoon heat did not deter her. 90 degrees in a metal camper … no breeze and hard, physical labor. Are you impressed yet?!

Phase III … the Ta-Dah moment. I drove over to her place yesterday for the unveiling and to take these photos for you. At this time, the vintage turquoise oven and ice box are not yet installed, but that will come. Eventually, Michele’s darling 1961 Shasta will be wearing a fresh coat of turquoise paint on the outside. The aluminum will be polished and “she” will be restored to her original glory. And, she has a name now. She knows who she is. Her eyes blinked open, she took her first breath as a newborn glamper, she’s ALIVE! Say hello to Miss Prim To The Brim.

To make the contrast more tangible, here are “Before & After” shots: 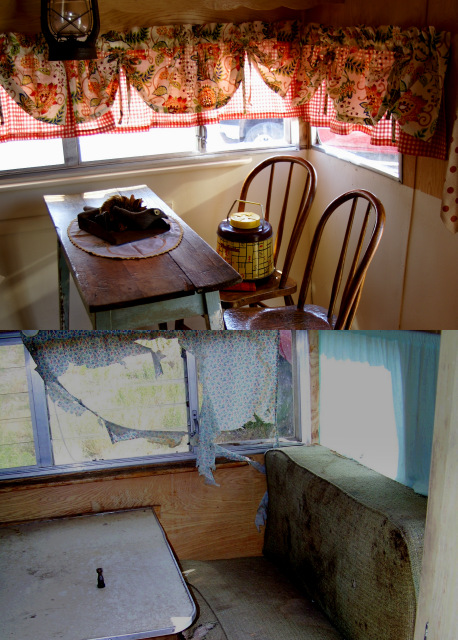 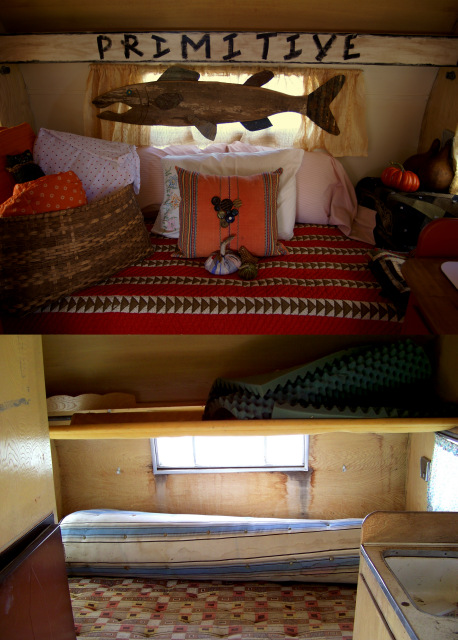 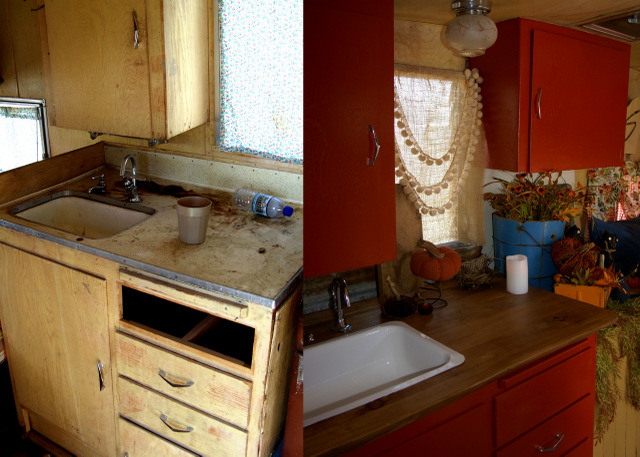 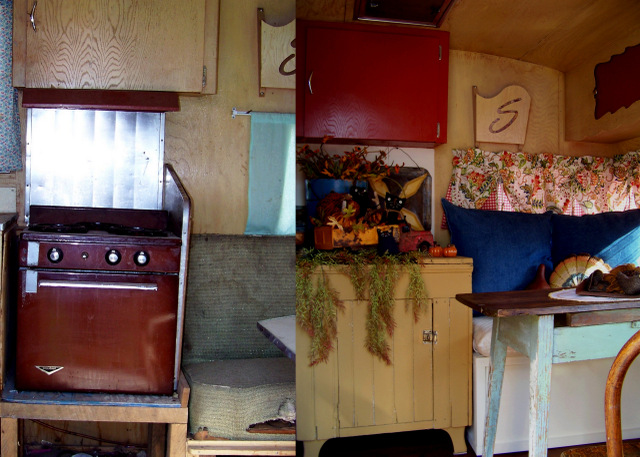 What a transformation! More photos …

Michele used several vintage items she already had, she made several things, and of course, she bought some goodies (like the big junk-art fish) that are on the glamping must-have list. Things like vintage coolers, crochet afghans, wool quilts, camper specific needfuls The large basket is one that our fellow farmgirl made for her (Anita). While all of us farmgirls have been fitting our campers, we’ve shared many items that we had that would work for someone else. The back & forth giving-fest has been great fun!! We’ve helped each other Git-R-Done.

What comes next? Getting ready for the ultimate goal – GLAMPING – that up until yesterday, seemed to be off in the distance. Now, we can hear the hands on the clock ticking. We’re soon to be on the road as a full-fledged glamper caravan … ready to rock & roll for real!! The players and their trailers: Anita and the “IttyBitty Bunkhouse”, Donna and the “Holy Roller” (she’s our chaplain :o), Jennie and the “Little Black Dress”, Michele and “Prim To The Brim”, and me & my “Cabin In A Can”.

Other farmgirl sisters are joining us too! Lisa rented a cabin in the campground – she’ll dress the outside up in glamper fashion just like we will “stage” our glampsites. My ‘blood’ sister, Beth, will come up and join us for dinner one night. And, Anita old me yesterday that Brenda’s schedule loosened and she is going to be able to come also – with her slide-in pickup camper. Anita and Michele are going to help her get her camper glamorized. WoooHoooo … but, Eeeek, we all have so much to get ready!

Below: Here are six of us the other evening when we had our 2nd meeting at Donna’s house (seated) to get our glamping plans organized. Donna and Jennie had just finished painting Donna’s 1962 Shasta that day. Michele wanted to hide behind the others because she was still in her work-clothes — having been slaving in her camper all day. Her momma, Barb, is standing to the right of her. Barb and Donna are our two new farmgirl chapter members – the new hens.  Like most of us, Donna may not have every last detail of her glamper ready by the time we bug out, but all of us are otherwise ready to roll down the road. All of us farmgirls (except for me) purchased their campers within the last two months. They’ve busted their bums turning their campers into glampers. Donna ordered replacement wings for her Shasta and later I’ll share the source info with you when I blog about the details of all of our individual campers in a virtual glamper tour. In the midst of all this glamper fervor, we have gardens that are about to peak. Guess what is on the glamping menu … lots of fresh produce.

I’ll take gobs of photos while we’re glamping so that you can sit beside us by the glampfire. We have all kinds of fun things planned … a formal-ish glamping dinner, paddle-boating at the lake nearby, antique shopping, seeing the sights in the Black Hills, lunching at a winery, etc etc … and relaxing quiet time, reading a book in the shade, going for a walk in the woods. Our campground is small, privately owned, quaint, deep in the heart of the Hills … with Aspen, Fir & Pine all around. There is an open meadow at one end and a pond across the road. We’re alllllmost there.

I’ll have so much to tell you later. But, I better scat, I’ve got things to pack, things to cook, things to clean, a garden to water, and all the other everyday demands of life. The countdown to “Glampville Or Bust” has begun in earnest. Oh, there is one last thing – a funny little coincidence. While we’re glamping, MaryJane’s new book will be officially released and begin it’s journey to mailboxes all over this great land. Go figure … we may not be home when our copies arrive ‘cuz we’re gonna be out gettin’ our glamp on!! Perfect irony I’d say.