These Boots Are Made For… 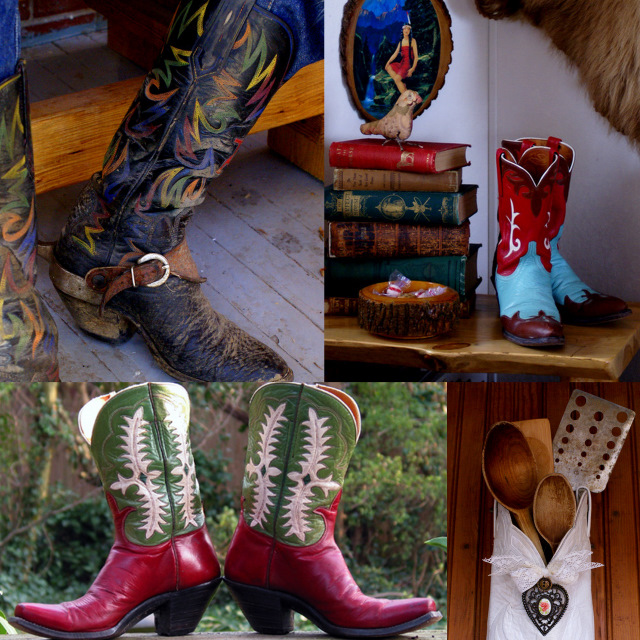 Nancy Sinatra’s 60’s mega-hit made it clear that her boots were made for walking. Those groovy Go-Go boots had an agenda in the song. Her boyfriend was doing her wrong … so goes the story. If you don’t know the rest of the story … take a fresh listen to “These Boots” via the YouTube link below … and then read on about the life & times of my favorite footwear.

I feel fortunate to have been a child in the 60’s, a teen and young adult in the 70s. Young folks nowadays have rediscoverd 60s music and many of them think the music of my youth is the COOLest. I agree and it tickles me that today’s youth enjoy good pop/rock music no matter when it happened in history. The music of the 60s was FanTasTic! The clothes were funtastic! Fun clothes, classy clothes, left of center clothes, hippy clothes … and Go-Go boots. Although I’ve been a country girl at heart all along, my dad’s work took us to town (several towns actually) and because of that, I fell into being a bi-cultural ‘cross dresser’ of sorts. I liked country music and rock & roll, cowboy boots and hippy bell-bottom jeans. I had cowboy boots, go-go boots and hiking boots. Oh, the go-go boots! It was a thrill and a half to wear my first pair to the first day of 4th grade. All through my later school years, I owned some form of Go-Gos. By then, I was deeply in love with John Denver too, so, another style of boots at the ready were Red Wing hikers.

Some of us have a thing for shoes. I’m guilty. Boots have been in my closet always, cowboy boots first … from the time I was shorter than a yardstick. Various styles of shoes came and went, but boots are my footwear of choice. Nowadays, though, comfort is more important than being a stylin’ chick. Aging feet = greatly decreased footwear choices. When I find a pair that feel good, I’m thrilled. If they also happen to please my eye, it is a miracle. I’ve added Keene and Dansko to my brand name preferences. Oh, but how I love a cute pair of cowboy boots! In the above photo, the red and sky blue Tony Lamas are my dress boots. Working class boots are a necessity in ranch work; I’ve got a pair of Justins that are kind to my feet. The below photos are a couple of years old and my boots are being re-soled as I write this. I like Gus’s comment (from the movie, Lonesome Dove), “He’s not one to give up on a garment because of a little wear.” :o)

Lets broaden the topic of boots. They’re everywhere. Boots are hot items in the fashion world and they’re a staple in the working world … indoors & out. There are boots for every age and interest group. There are fishing boots, polo boots, re-hab boots, army boots, biker boots, snow boots etc. And, farmgirls love boots too! 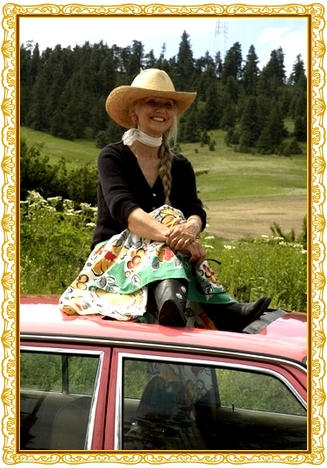 Some boots are famous … Tom Mix’s, The Beatles’, and Santa’s.

Some boots are INfamous …

What is the wisdom to be taken from the Oz witch’s fate? Wear your own darn boots – don’t be stealing other folk’s shoes and don’t mess with their puppydog. There is a reason she rode a broom or a bike. A horse would’ve dumped her sorry bum in the dirt. Ok, perhaps her boots were ill-fitting and hurt her feet. I know from experience that painful shoes can make you feel witchy ;o{ Getchya some comfy boots, be good, be happy. We do indeed reap what we sow. Wear boots that walk in the path of righteousness. Then, ya won’t need to be on the look-out for flying houses aimed at you.

In the cowboy world, a popular way to aquire the ultimate in comfortable footwear is ordering custom-made boots. The boot above belongs to a friend of our’s. The boots have his brand inserted in the upper. But, the real beauty of a custom boot isn’t the ‘pretty’, it is the fact that before your boots are made, your feet are traced and sometimes a mold is taken of each foot, so as to make the boots a perfect fit for your unique feet. I’ve not invested in a pair, but I’m considering it. 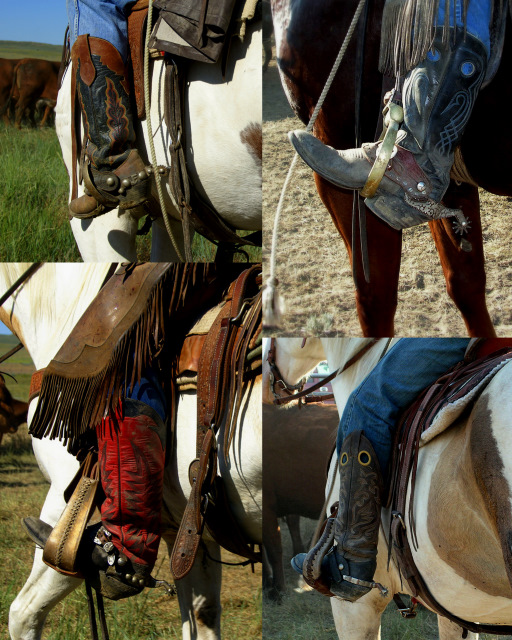 Western cowboy boots are the kind of boots that dominate the area in which I live. Our friends and family wear them … and for every occasion! In a western lifestyle, boots are multi-taskers. Men who wear shoes most of the time might own a pair of boots. But, cowboys wear boots, period. About the only exception to the rule would be if he plays sports. Cowgirls, on the other hand, may trade their boots for something a little more feminine for special occasions … like their wedding day. 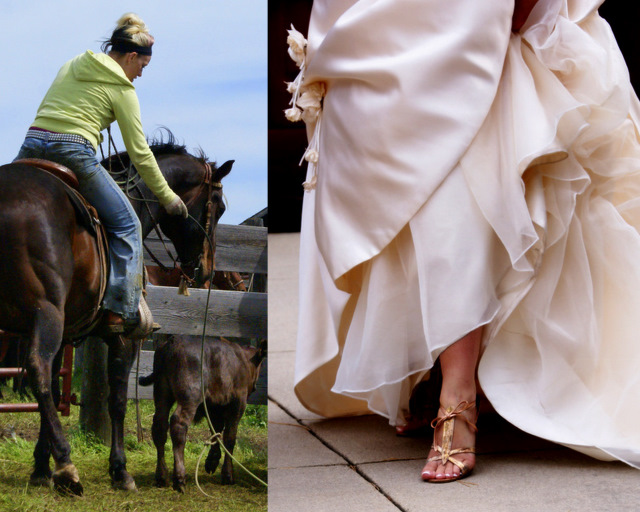 You’ll see cowboy boots in the ranching sector anywhere you cast a glance. 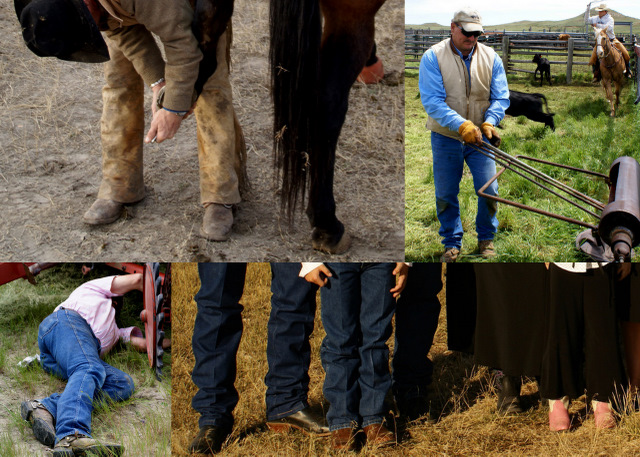 Ok, I’m gonna pick up the pace so that I can share what else is on my mind (later in this posting). Boots work and they play. In the cowboy life, work and play blur together sometimes. I’m grateful everyday that my boots get to call this life ‘work’.

Much of the time, a cowboy’s boots work a’horseback … 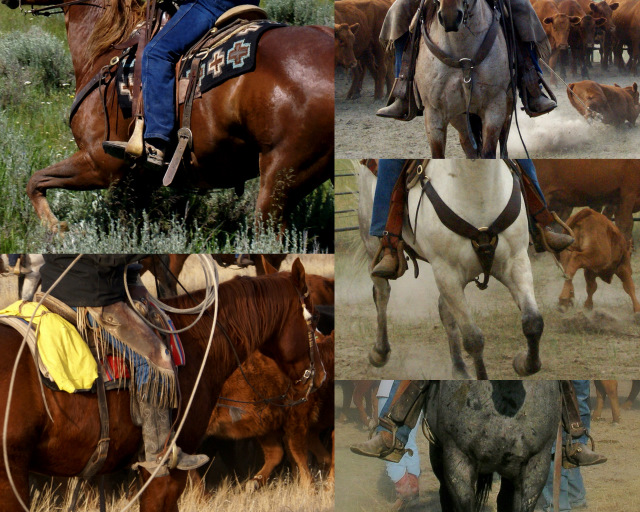 But, there is always a lot of work to be had on the ground … 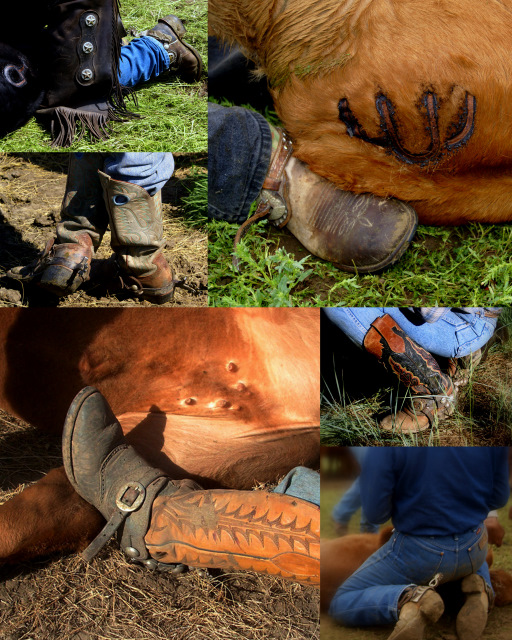 Sometimes boots take themselves serious , other times … not so much. Boots love to play! 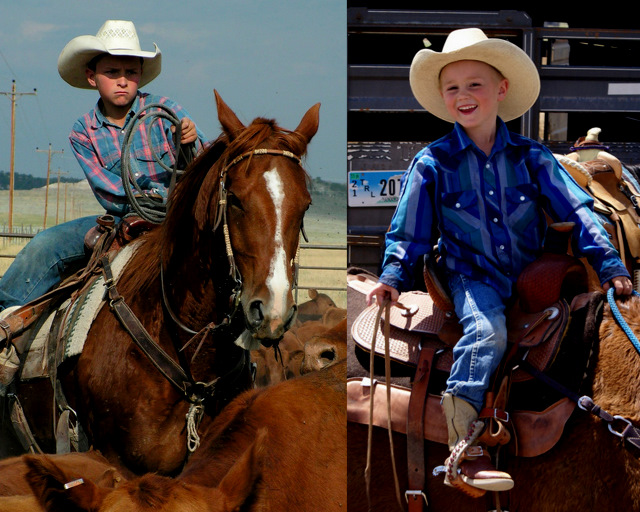 Cowboy boots are American! Most often, the cowboy wearing them is native born. Some cowboys are not only native born, they’re ‘Native’ to this country allllll the way down their family tree. One thing is true about them both, they’re proud to be AMERICANS. Little Joshua’s braid doesn’t show in the photo below, but it hangs to his belt. 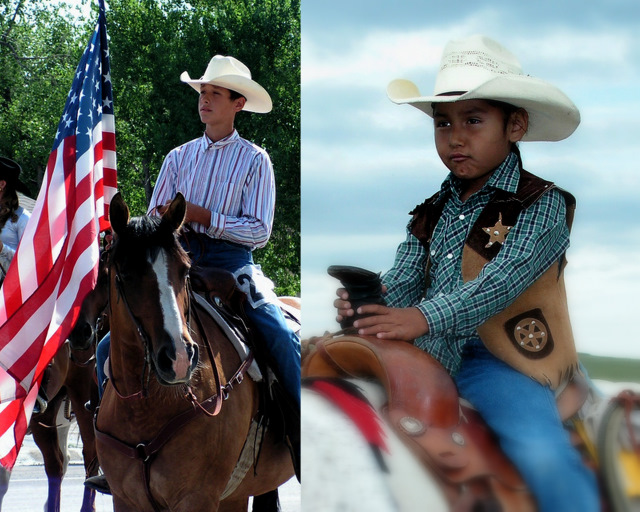 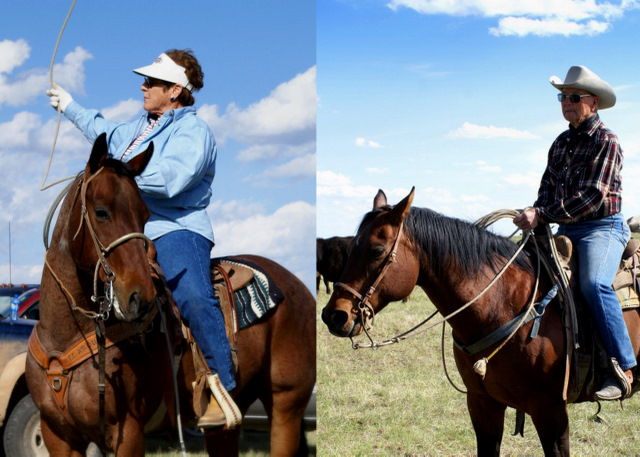 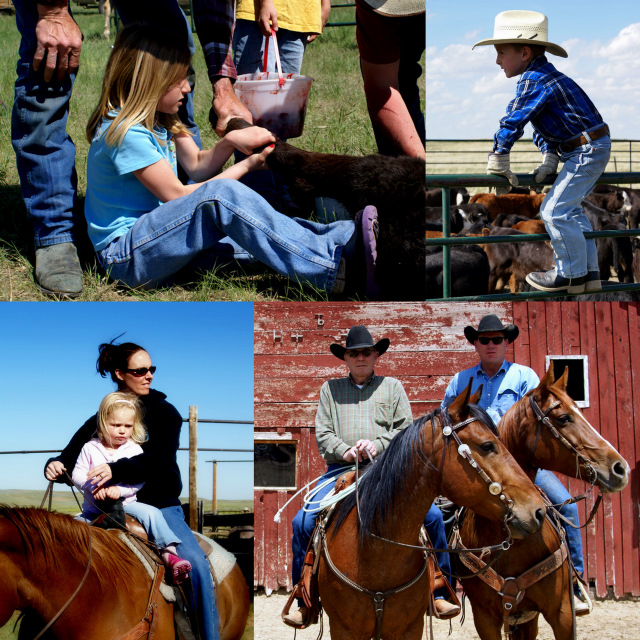 Given half a chance, boots can bring the best out in a person and help you make friends .. of man and beast alike. 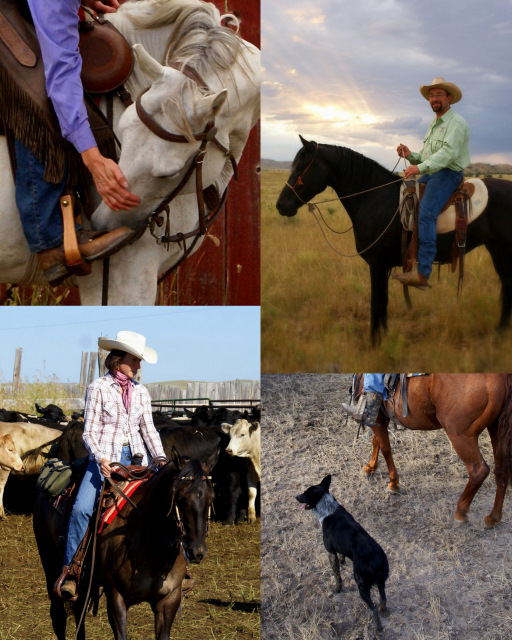 Dolly The Wonderhorse has never met a pair of boots she didn’t like, but she especially likes little boots. Her motto in regards to small children is this: “Awwwww, aren’t they cuuute … they’re people puppies!” :o) She was nuzzling our young friend’s head (below). She’ll even nicker softly over human infants, but then, what’s not to love about the smell of a baby?! Dolly has been mother to seven babies of her own. She has not been a broodmare only, she’s always ‘worked for a living’ when not on maternity leave. Now, she’s a grandma. When she leaves this life, it’ll be a dark day for me … and her ‘boots’ will be impossible to fill. She and I have been pardners for 20 years.

There are certain times of the year when boots have to get up in the middle of the night to check on things. You never know what kind of surprise awaits you during calving and foaling time. In the spring, it is fashionably acceptable to wear boots with a nightgown.

Boots are easy to get along with. If you have a hankering for speed and thrills, they’re more than happy to “Cowboy Up”!! 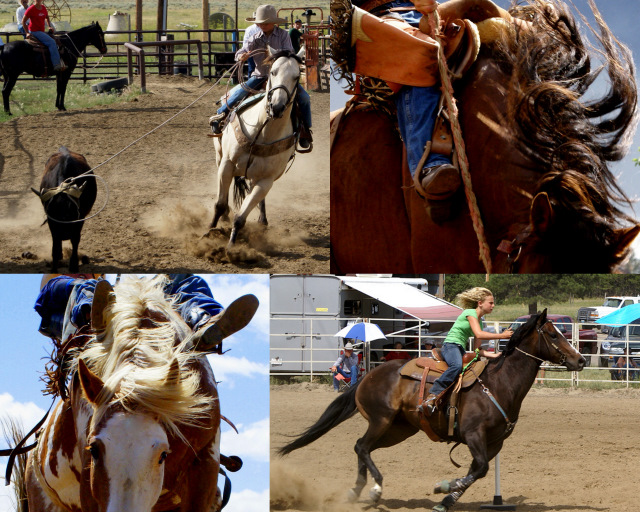 But, for the most part … like 90% … the cowboy and their boots work at a much slower pace. Here is my favorite “pair” below: 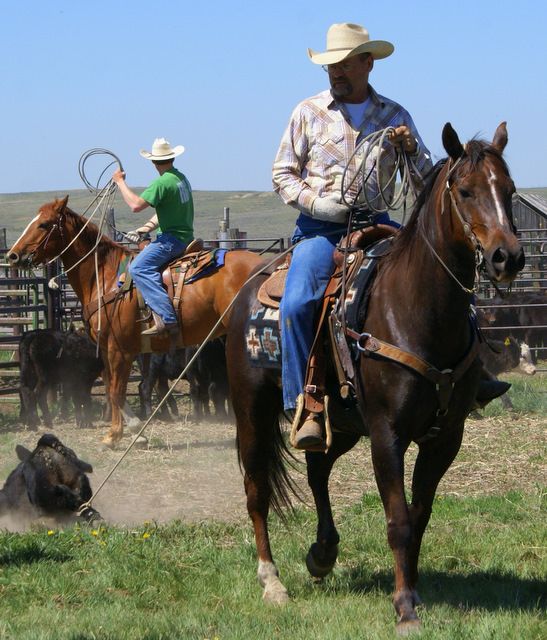 Boots are well acquainted with the seasons. There are boots for all four. At the moment, our boots are doing fall cattle work which involves vaccinating and ridding the cows & calves of parasites. The calves are given vaccinations that prepare them for weaning. The cowboy in the gray jacket (my husband) is holding the kind of gun most commonly seen in the new west: a ‘gun’ used for liquid that will rid the cattle of internal parasites.

Last weekend, my boots and I walked amongst the herd of baby heifers so that I could pick out the replacements. I also gave vaccinations and visited with our veterinarian while he administered BANGS vaccinations to the heifers (photo below); they also receive a metal ear-band to prove they’ve been vaccinated. Here are a few of my baby girls.

Fall cattle work happens before it gets cold. We’ve been busy getting the details in order – a lot of moving cattle around, throwing small bunches together, separating steer & heifer pairs apart. The goal is to prepare the calves to sell and ship soon.

Other baby animals are soon to enter the next phase of their young lives. Remember the young antelope twins that I posted photos of over the summer? They’re nearly as tall their mama now. Here is a collage showing her right before she had them, midsummer and the other day. 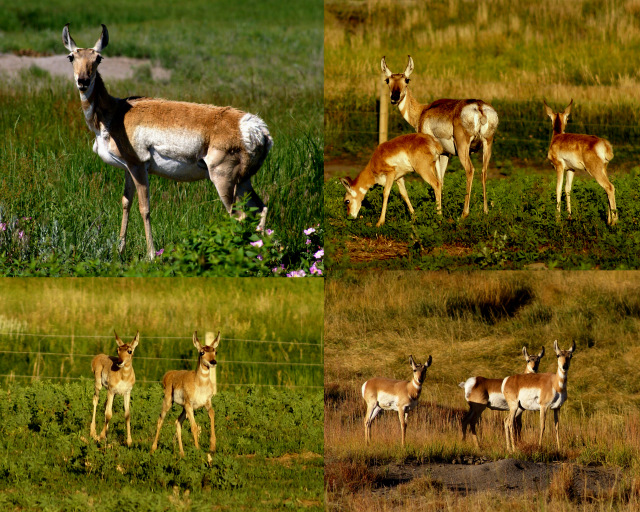 On the farmgirl front: our local farmgirl sisterhood chapter members are getting ready for our craft show next weekend. Michele tells me she’s made a herd of rustic birdhouses, one is even mounted on an old cultivator. She’s also sewn some folkart goodies. Anita is making soap, baskets and cheese. She told me that she just made a fresh batch of Havarti cheese – my favorite. She bought a new milk cow last week – a darling three year old Jersey named Daisy. Her milk is sweet, very white and mild. I get a couple gallons weekly. I’m not sure what the other farmgirls are making for the show…Lisa is probably bringing some of her ‘gourmet’ paper goods. She gifted me with a journal the other day, cool hu? She is our local newspaper owner/editor and the paper arts as a hobby fits her to a T.

Say, speaking of crafts … If you enjoy making sewn folk art, you might like to make my “Mr. Peter PunkinEater”. You can find the pattern and instructions in the new edition of MaryJane’s farmgirl sisterhood newsletter/magazine, The Cluck. He’s very easy to create! I opted to make him look like a Lumina pumpkin, but you could use orange fabric instead and dress him in accordance with Halloween colors.

We’ve enjoyed a long Indian Summer. I’m still watering petunias in October! They usually perish via a hard frost in mid September. I’m ready to move to the next phase of autumn – jacket weather. Thank you again & always for stopping by. I like the old-fashioned saying, “fare thee well”. It covers every good hope you have for your friends. So, fare thee well, my farmgirl friends.