Ice In The Bucket 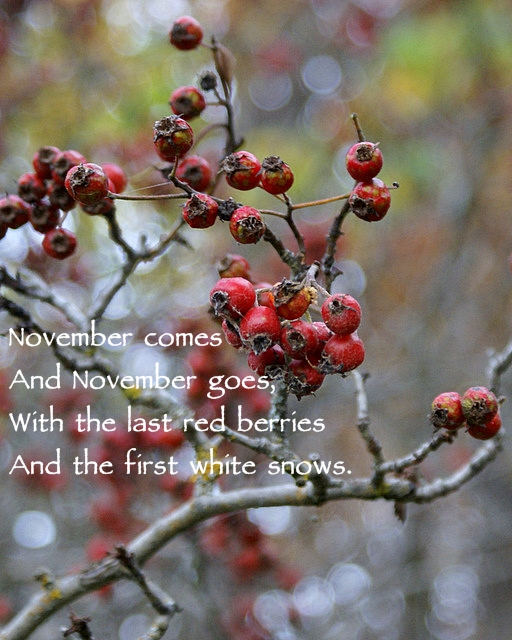 Indian Summer stayed on the Plains for as long as she dared, but winter’s first howling squall drove her away. Classic Vs of Canada Geese escorted her … one honking choir after another, their voices fading as they flew further and further way. Suddenly hearing them overhead always exhilarates, but then I am left with a soft, almost sad longing. I wonder what it would be like to join them … wing to wing.

With the last red berries

And the first white snows.

And ice in the bucket

And frost on the gate.

And the kettles sing,

And earth sinks to rest 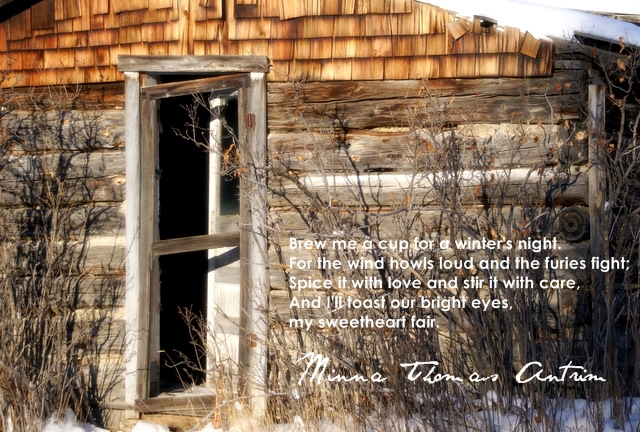 Hey, wait just a darn minute! Not – so – fast. I need to eee-ease into winter. “Winter’s icy blast” … HUMBUG!! I’m as romantic as the next farmgirl, but, over the years I’ve become a former winter lover. It all began when I said “I Do” to a rancher. “Wintertime” ranch work and Murphy’s Law go together like peas & carrots. Problems that come up are either caused by winter or made more problematic by winter. I slowly acquired a not so rosey outlook regarding winter. At first, it was an adventure. “Let it snow, let it snow, let it snow” … you know the tune. Fast forward to now, now that I have gray hair, now that I know too much, now that I have a long, Grinch-like list of winter woes. I could say “I liked it right up until” and then go down the list. However, I’ll offer only one: While walking across the driveway toward the corral, I slipped on the icy gravel with an axe in my hand. Down I went with a thud. It happened in an instant, but you can fit a big worry into a little-bitty moment … the fear of an axe finding you as its mark. But, it didn’t. I was on the way to a water tank that had 3″ of ice on top. The horses had pulled the tank heater out of the tank during the night. I need to mention that it was early morning, I hadn’t dressed yet. I thought I’d just run out and chop the ice so the horses could drink. I was wearing my nightgown, barn-coat, muck boots, heavy gloves and my husband’s ear-flap hat. I would’ve been madder as I lay there splayed out on the snow (with a scraped up bare bum) if it weren’t for being acutely aware of how ridiculous I looked. Trust me, you can be humiliated even when you are all by yourself. It helps to find humor when it is most needed. Deep sigh. Honest, I really am trying to re-energize my winter romance mojo. 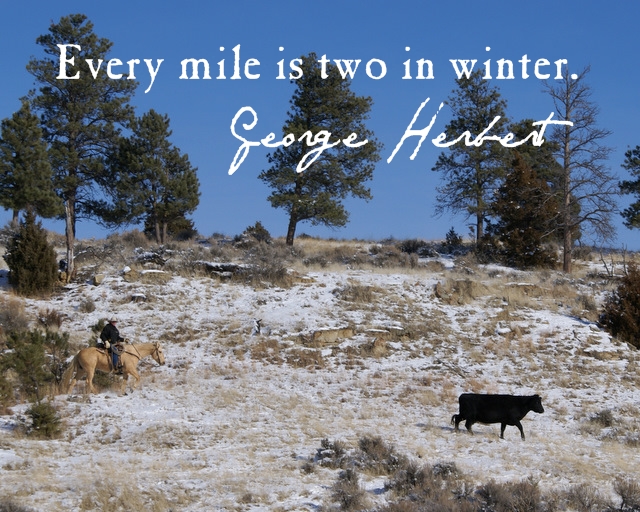 Ok, I gotta back up a little. It was just two weeks ago that Anita and I and a flock of girls from our church youth group were raking leaves for an elderly couple. I hadn’t raked leaves for years (for lack of them) and the yard we worked on completely filled Anita’s 20 foot stock-trailer with leaves. The girls also tidied flower beds and picked up limbs. Through them, I remembered the girl I once was. They reminded that a child finds delight in three things while involved in this sort of activity … friendship, frolic and a fresh sense of achievement.

We knew we were crowding the calender – we needed two nice days without wind for the raking assignment. The weather turned out to be perfect and when we were done, we enjoyed a pizza picnic on the lawn. The girls worked all morning with nary a complaint, but they needed to mix their yard-work with play time … and Why Not?! Memories were made that day. Giggling + healthy camaraderie + physical team-work = Vitamin G (good). Kids attach strong sentiment to such experiences. Fond memories stay with them all of their lives. Something else – I was unexpectedly blessed. We grown-ups can get caught up in our workaday world … like fish tangled in a net. Children return to us the gift of frolic if we’ll just turn off the world for awhile and follow them into their world. 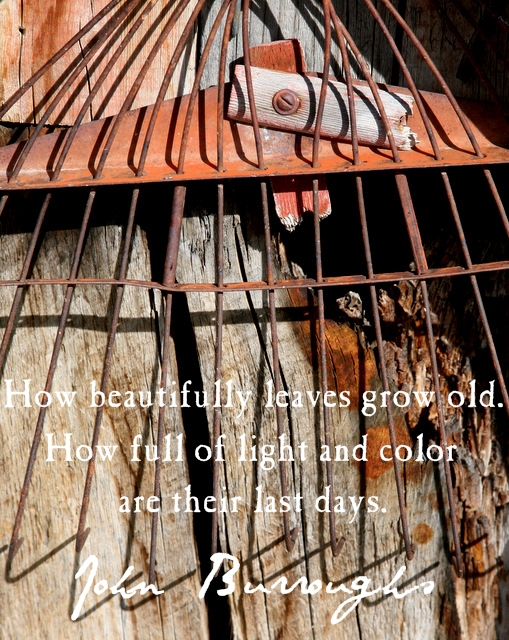 Frolic and humor are needful things in the recipe for a contented life … well, in my life anyway. Other folks may hanker for more quiet time … but even that can be a kind of joy. Joy is oft times happy to be still, to sit in a cozy nook with a good book. But then, someone comes along and asks her to dance. Like us, joy is ever constant in reinventing herself … picking out a new favorite color and deciding what she is going to wear today. 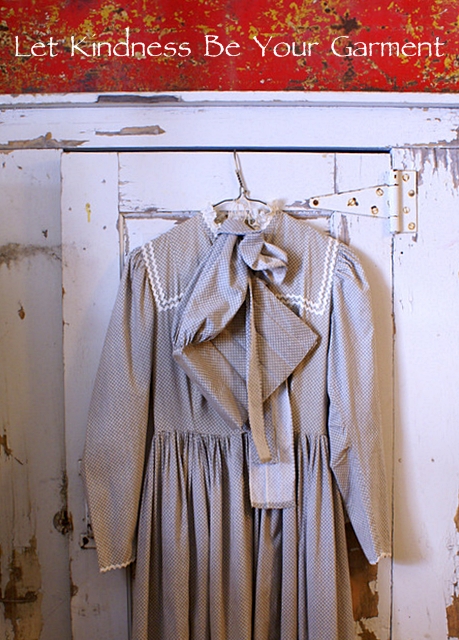 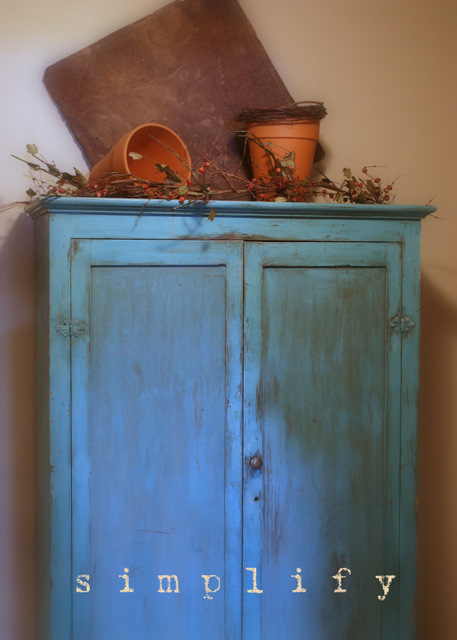 The phase of peacefully accepting winter is next I guess. I’ve been blessed with 54 springs, summers and autumns … now it is time for my 54th winter. We’re about to enter Thanksgiving week. Being grateful should always be a state of mind that never wanders far from home. I’ve been given the reminder as I write. 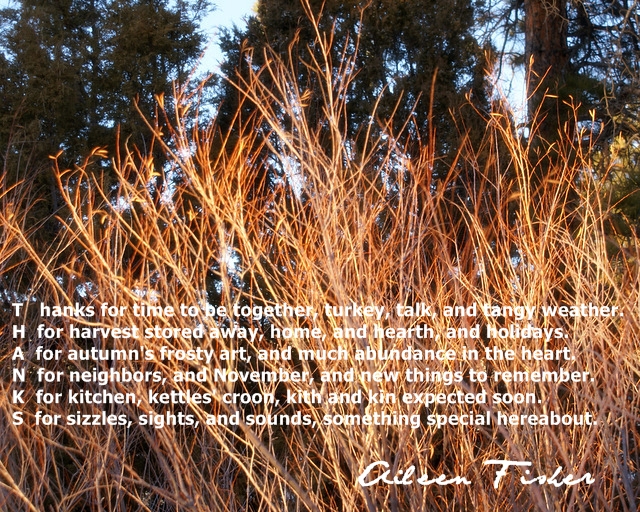 I’m also reminded of many things I’ve seen and committed to memory … ordinary things that are a pleasant sort of worthy. 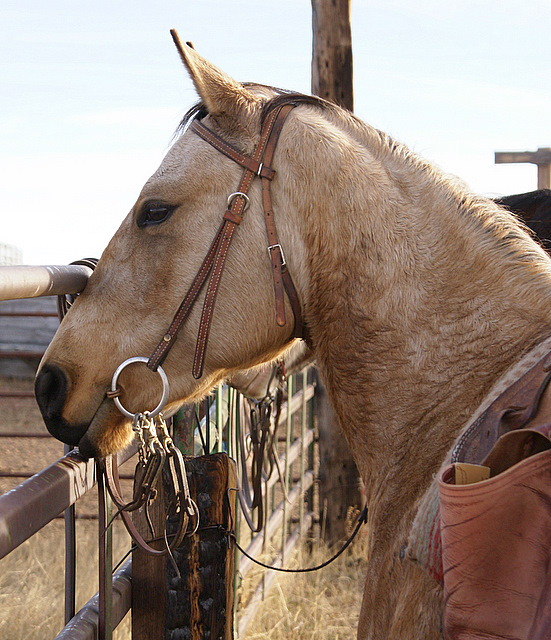 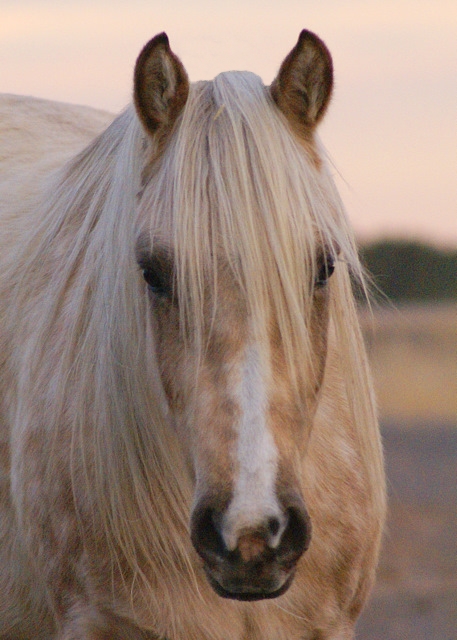 My filly, Ribbon, sporting dapples on her new winter coat. 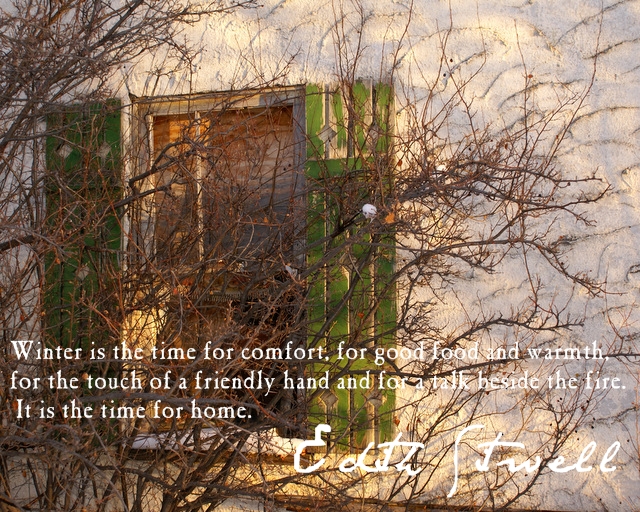 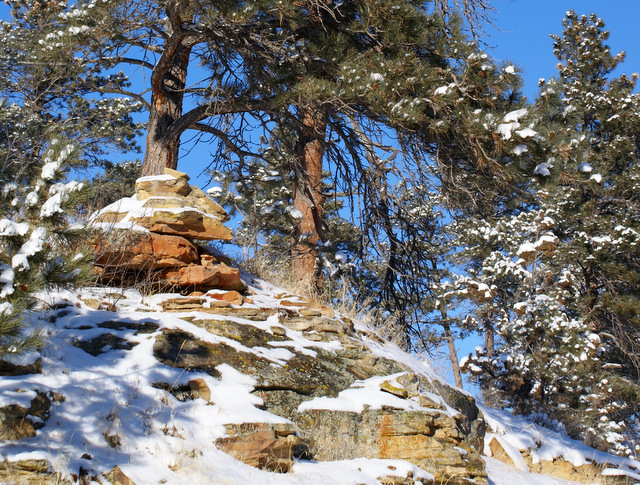 Along the road to a friend’s house. This is the rocky hill-country that borders the prairie where we live. There’s a lot of Ponderosa Pine, Juniper and Scrub Oak.

Wild turkeys on the same ranch. These, however, aren’t very “wild”. Their diet is supplemented with corn offered to them by our friend’s father. 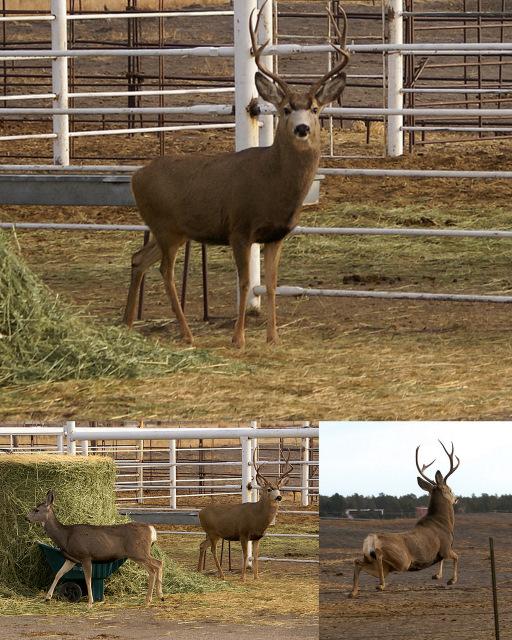 I went out to feed and to my surprise there stood a pair of Mule Deer snacking on the hay bale. It isn’t uncommon to see does and fawns pass through here, but seeing this handsome buck was a shock. During hunting season, they’re elusive. This fellow was in pursuit of his ladylove. He didn’t hang around long once he knew that I was watching. 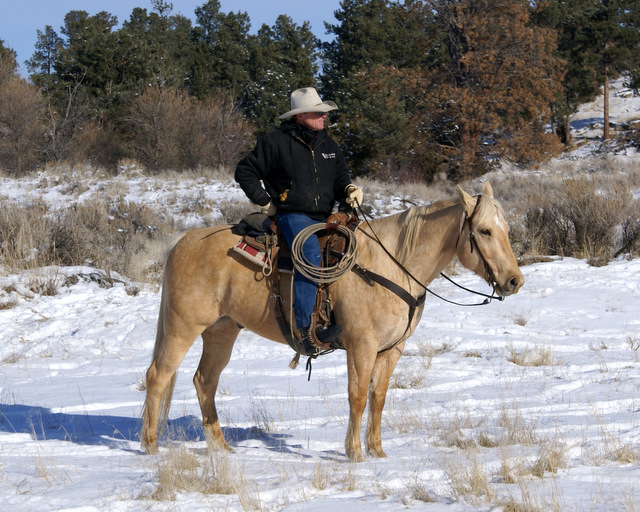 When I married my husband, I didn’t know that with him I would also gain a new friend, his brother Earl – one of my favorite people in all the world. 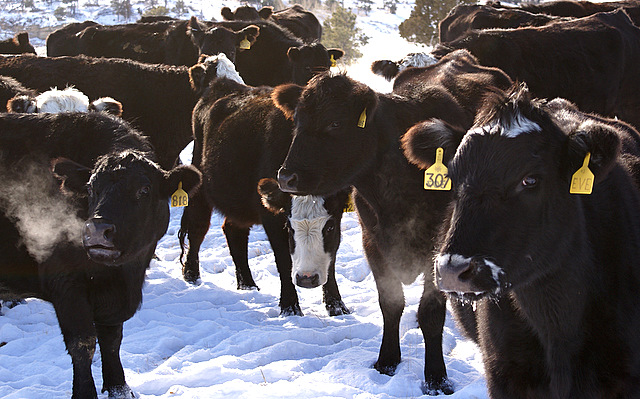 Brother Earl’s cows on a cold November day, the day their calves were weaned.

Peeking into December … I’m looking forward to going Christmas tree hunting with Earl and his daughter. We go to a part of the ranch where thousands of native Juniper live. I had an artificial tree for several years, but I never really bonded with it. The romance part of the holidays is made up of all the sights, sounds and smells of Christmas. For me, a fresh evergreen tree is one of the things that sparks the Christmas fire within. I found these vintage ornaments recently. 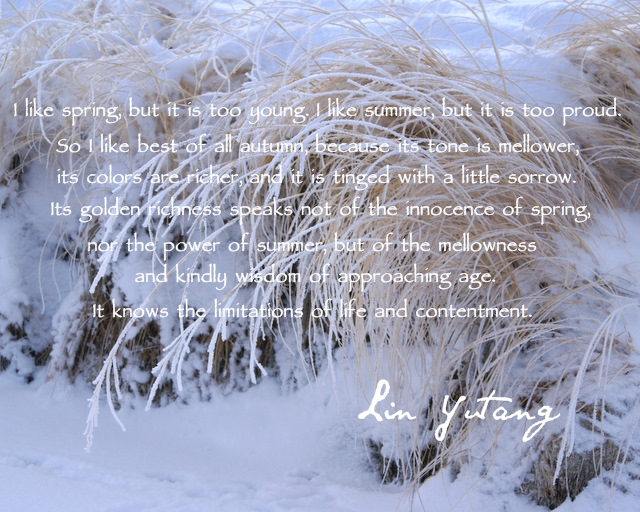 I didn’t greet the first cold snap with delight, but I’m workin’ on a better attitude (if not actual delight). My young, free-range hens are not impressed with winter either. In the mornings when I let them out, they always burst out of the coop with eagerness and flop away playfully to “work” the barnyard. After three days of confinement due to our first winter squall, I opened the coop door so that they could be outside for a few hours before dusk. Winter is new to them and they were very hesitant to go outside. They didn’t like the looks of it at all … but the brave ones led the way. I share their doubts and admire their willingness to try and make the best of it. That is a first step in being thankful in less than ideal circumstances.

(From my antique postcard collection)

“Things” don’t have to be perfect or even good to generate gratitude. Being thankful is often folded in with giving … not just having. We should be thankful for what we have, true, but we should also be as thankful that we can enjoy the immense blessing that follows giving. The holiday isn’t called “Thanks-having” … for good reason.

“How wonderful it would be if we could help our children and grandchildren to learn thanksgiving at an early age. Thanksgiving opens the doors. It changes a child’s personality. A child is resentful, negative … or thankful. Thankful children want to give, they radiate happiness, they draw people.” ~ Sir John Templet

Have a holiday filled with festive farmgirl joys and may you have many reasons to be grateful. I’m thankful for innumerable things and even more so for the blessings I’m completely unaware of … those mysterious unknowns that are a part of being held in the palm of His loving hands. Safe journeys to you all and for those you hold dear.