A fairly large wildfire started in Willow, Alaska this past Sunday, June 14.  I was working on the farm that day and the farmer and I repeatedly lamented how crummy of a day it was: HOT (nearly 90 degrees), dry, cloudless and windy…Silty dust was flying everywhere and the combination of wind and heat sucked all of the moisture out of the plants and us.  Little did we know that around mid-day, a small, nearby community was having a much worse time than us! 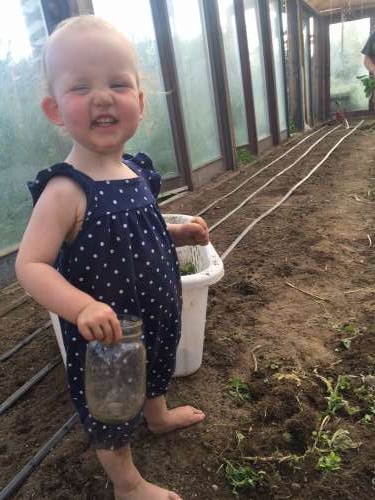 Ava doesn’t seem to mind the sweltering heat even in the greenhouse!

A few weeks ago I wrote “53 Things” that were on my mind.  One of those was to highlight the good that Facebook and other social media provide for users.  We are often reminded of the negatives–social media has replaced actual socializing, some people feel depressed or anxious after seeing that others have such seemingly happy lives, teens and disadvantaged people are bullied, etc.  HOWEVER, I would like to argue that, used the “right” way, social media can and does do more good than harm.

This was proven to me in the aftermath of the Nepal earthquakes.  I was lucky enough to have spent a month and a half in Nepal several years ago.  In that time, I made several friends and I have a few friends from university who also live in Nepal.  In the days that followed the earthquakes, I was notified by Facebook that these friends had “checked in” and were safe.  What a relief! Furthermore, what a perfect way to utilize a system that is used by nearly 1.5 BILLION (that’s right, about 20% of the world’s population) users.

So, I guess we all appreciate cat videos once in a while and scoff at or praise our acquaintances’ politicized posts; but when big events like this happen it is fantastic to see these resources used to the best extent possible.

These good aspects of Facebook have been further proven to me over the past several days. 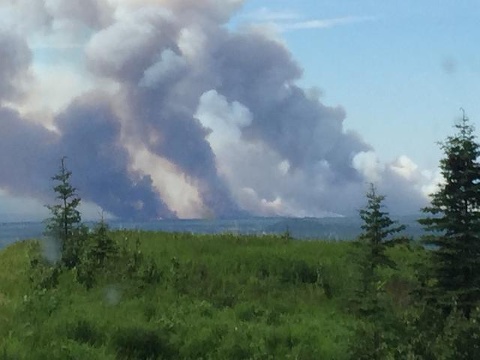 Smoke plumes from the Sockeye Fire can be seen from miles away. Photo courtesy of KTUU.

Within a few hours after what is called the “Sockeye Fire” ignited, it had consumed 6500 acres and forced the evacuation of many homes in the community of 2,000 people.  While Willow isn’t extremely removed from the conveniences of a city (it is about 20 miles from Wasilla which has most major stores), a large portion of the community is largely self-sufficient with livestock, large gardens, many outbuildings and a lot of memories on their parcels of land.  It is also a place with many, many sled dogs.  The Iditarod actually starts in Willow, so it is a popular place for mushers to live.  So far, about 20 homes and it sounds like 40 other structures have been destroyed by the fire and hundreds of families have been evacuated.  Over 500 sled dogs are in temporary kennels in various parking lots, farm fields and pet food stores. 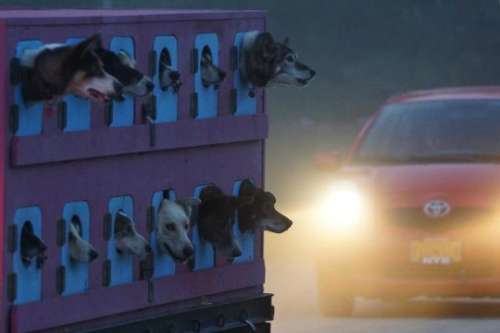 Huskies being evacuated from the fire zone. Photo courtesy of KTUU.

The Red Cross has set up evacuation centers for people, but what about all of those animals? Almost immediately after news of the fire was released, people popped up all over Facebook offering space, food and fencing for livestock.  I am on the “Alaska Farm & Food” page which is always extremely helpful, but that online community really stepped up in this emergency.  There were offers of private, clean, electrified stalls with accompanying monitors and spaces for owners to sleep for any expecting goats/pigs/cows/etc.  Folks with animal trailers offered to transport large animals, and calls for extra fencing have been answered with choruses of people.  Several people have taken off work to start building chicken coops and dog houses for those that were lost.

Of course, with all of this shuffling around of animals and the quick erection of temporary fencing, some animals have gotten loose.  Most recently I saw “A black mare and a mule are in my yard, does anyone know where they belong?”  Within minutes the post was shared widely and the proper homes were found. 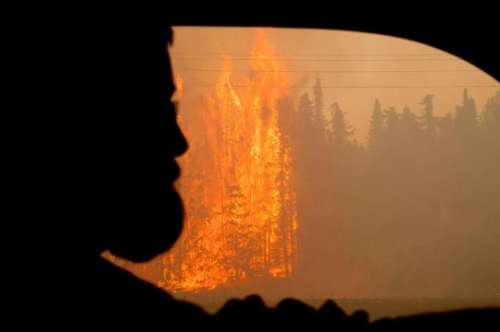 The Fire as seen by evacuating motorists. Photo courtesy of Stefan Hinman, KTUU.

Another woman posted that she had lost her home in the fire and with it her father’s treasured canning supplies.  It sounds like he as an avid canner that gifts most of his creations away–he just loves to process food!  She was hoping to rebuild his collection of vintage jars, canners, funnels, tongs, etc.  Countless people have stepped up to donate to her cause.  Hopefully he ends up with a nice set up.

One of the best posts I’ve seen in the last few days was this joyful one:”My flock is still ALIVE!!!! I still have a HOME!!!! Don’t ask me how when so many around me lost everything.”

So, while this fire has been (and continues to be) a hard blow to a close-knit community, the positive stories coming out of it are many.  I guess this is often the case with tragedy; and while the good stories make the rest of us all warm and fuzzy inside, we don’t know what it’s really like for those living through it.  I’m just glad to see that the sometimes reclusive Alaskans can really pull it together for those in need!  Our compassion will really be tested once it’s time for everyone to go back home and start rebuilding what was lost. 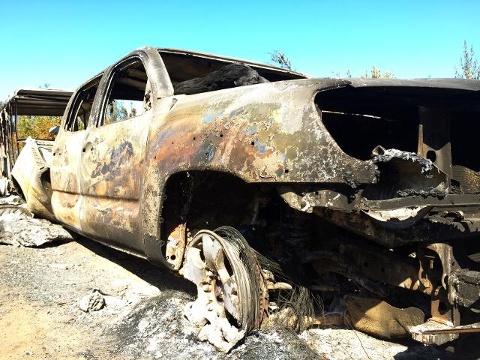 Burnt out truck in aftermath of fire. Photo courtesy of KTUU.

As for us, we are about thirty miles as the crow flies from the fire.  Willow is actually one of our neighboring towns, but there is a pretty huge mountain pass between us.  The smoke from the fire has been hanging in the air for days, and the smoke mixed with persistent 85+ degree weather has led to air advisories almost every day.  There are fires popping up all over Alaska, so if you’re an Alaskan please follow Smoky Bear’s advice: Don’t have backyard fires or barbecues (this includes the ever pervasive burn barrels) right now!  Most of the fires that are occurring are likely human triggered.

Also, thank you to all of those outside of Alaska who have sent donations and ordered pizzas for the firefighters, families and animals up here!  It’s pretty amazing what people can do in desperate times.

Sending Peace and Love from hot and dry Alaska!

p.s. If you’re wondering what the title means, it is “Facebook For the Win” because, you know, the internet loves acronyms.