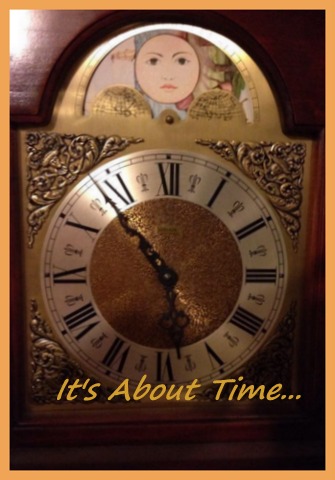 Technology’s transformed us, changing how and what we do, from performing all sorts of tasks to communicating. Times have changed so drastically in the last  hundred years, it’s mind boggling! Smart phones have impacted our daily lives, with ‘apps” for everything; bringing on the disappearance of some everyday items (when’s the last time you saw an actual pay phone)?

I’m not anti-technology, but am sad to see some things vanish. Email has replaced hand-written letters. Wiry, corded phones weren’t as convenient, but we did have to actually stop and talk to callers, and they always worked when the electricity went out. Calendars are virtually non-existent, and when I’ve asked my Girl Scout troop to take meeting notes, they pull out their phones. Cursive’s a dinosaur. (I think how unique each person’s penmanship is. My grandmother’s handwriting was beautiful. My father’s is, too). 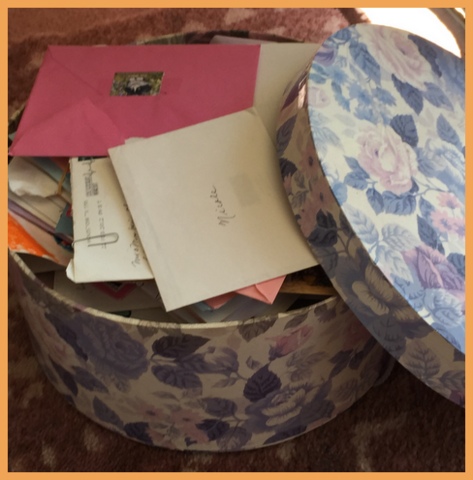 This hat box is filled with old letters, some from loved ones passed.

What I think I’ll miss most are clocks. Not everyone wears a watch, but chances are, everyone has a cell phone! How will that evolve with the new iWatch? I recently caught a glimpse of the news, featuring a 911 call released after a traffic accident. A gentleman performing CPR was in disbelief, when asking for someone to time him. Not one person in the crowd had on a watch! Many people don’t own an alarm clock or can even tell time without a digital display.

Once while teaching knitting, a seven-year old student was perplexed by the sound of the wall clock. She’d never noticed the tick-tock before. When asked if she could tell time, she answered, “I look at Mommy’s phone”.

Beautiful timepieces have long been a part of decor, and a big part of history. Think Big Ben or the clock at Grand Central Station. A lovely timepiece would harken a special event, or become a treasured family “member”. Recently, I was out with one of my friends when we decided to check a Goodwill store for antiques. There, behind locked glass, were two beautiful clocks. 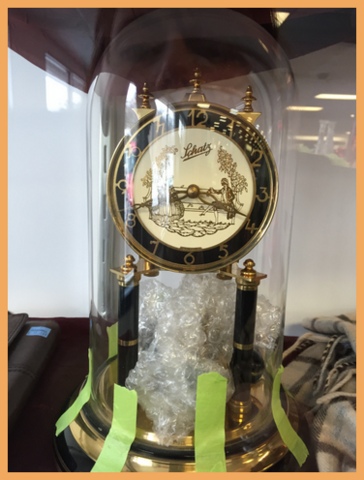 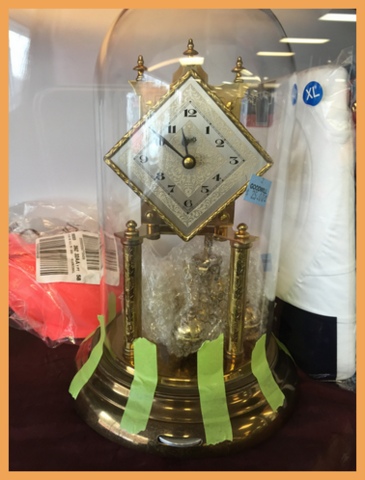 I loved the 1954 black enameled clock, and my friend the other. Made by Schatz, the clocks are called “400-Day Clocks” or “Anniversary Clocks”. They were meant to be wound only once a year with a brass key, marking a special occasion such as a birthday or anniversary. Made in Germany from the 1880’s on, they were most popular in the 1950’s as wedding gifts, but known more for their beauty than their accuracy.  Missing paint and without keys, we figured even if the clocks didn’t work, they’d be pretty vintage decor. 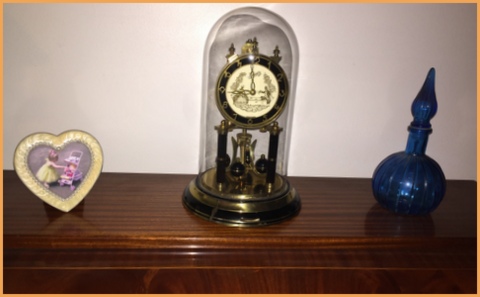 A true Anniversary clock doesn’t use electricity or batteries, but mechanics encased beneath a glass cloche. They must be perfectly balanced in order to run, and can be costly to repair. Setting must be done ever so gently. I got mine to run, but it took three nervous people and a borrowed key! We tiptoe past, and I hold my breath when vacuuming. With daylight savings time I’m afraid to set it again! Still, I find it’s spinning movement mesmerizing. 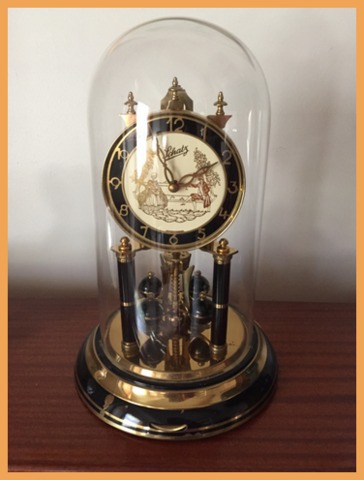 Growing up, we had a wooden Schatz Cuckoo clock, a present to my parents from friends stationed in Germany. I remember the thrill of the little cuckoo alerting the hours, and I’d run to catch a glimpse before he’d disappear again. I remember the sound as Daddy would wind it each week. As an adult, hearing that cuckoo was a trip back in time. 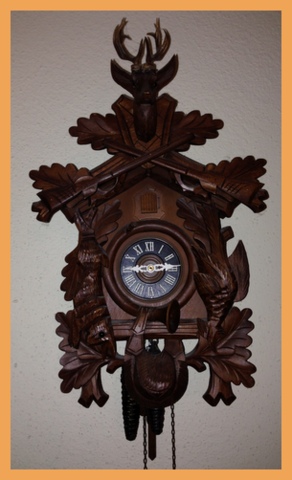 I’ve wished for a grandfather clock forever. My friend Andrea has one her grandfather bought second hand. Made in Germany in the 1920’s by Mauthe, it sat in her grandparents’ hallway for decades. The clock was referred to like a person. Andrea’s grandmother would say, “Grandfather is whispering”, whenever it chimed, and when in repair they’d say “Grandfather’s in the hospital”.  It sits in Andrea’s hallway now. The pendulum, made of wood, expands and contracts with the air moisture, which can cause the clock to run fast or slow depending on the season. 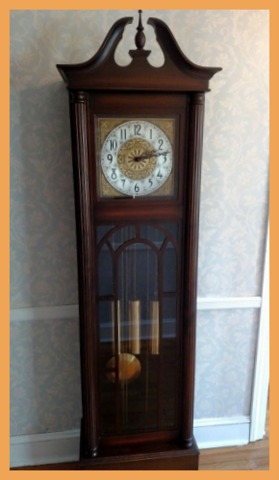 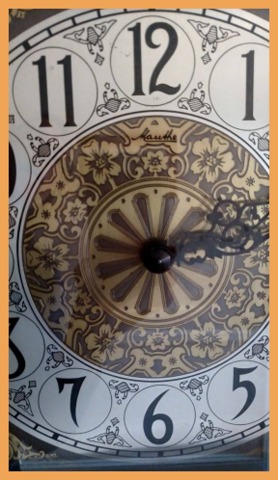 For my birthday recently,  my husband bought me a Grandmother clock at a tag sale. (Grandfather clocks are over six feet tall. Over five feet but under six, it’s called a Grandmother). In a friend’s basement for years, we bought it for less than a nice dinner out! We cleaned it up and got it running, though we’ve yet to get it chiming. She’s a beauty, USA-made in the 1920’s. 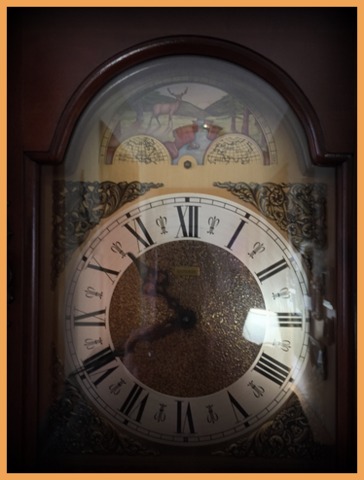 This is one of a few scenes on my clock. My favorite is the moon face.

The value of a vintage mechanical clock is in its movement; monetarily you’ll never get back what you put in. Experts are needed for cleaning and repair, and can be difficult to find. Vintage timepieces are temperamental; owning one is like owning a pet or having a living being in the house. Still, I think they’re a beautiful way to witness time fly.

Are you a clock lover? Do you still wear a watch? What other blasts from the past do you see disappearing? Leave me a comment and let me know ya stopped by!