While I am certain that you have enjoyed your residency here in the barn in years past, I must now insist that you leave. Immediately.

Your very presence is causing me great mental anguish. When I accidentally picked you up the other day, mistaking you for a stick, I thought I was going to die. In addition, you pose a threat to my chickens and the eggs I hope they one day produce. You have greatly interfered with my relationship with my magnificent horses as I now am afraid to enter the barn. You have, quite frankly, stolen my barn peace.

I apologize for any inconvenience this may cause you. And please know that I greatly appreciate any rodent eradication efforts you might have engaged in while residing here.

You have until midnight on the date stated above to be vacate.

I mean you no harm, only the best of luck.

(who finds you intriguing and wants no harm to fall upon you, but cannot find the courage to share the barn with you. Can. Not.)

And so it was done. My mind was made up. The snake has to go.

Yes, so many of you are correct: there’s no way I could harm or injure this snake. I just want it gone. I finally made up my mind that this had to be done.

I posted the notice beside the pink cat bed in my barn that the snake was living in. I was pleased when I saw him come out to read the notice. Sure, I felt a ting of guilt, but knew this was for the best. There were lots of barns available that weren’t mine, lots of fields and woods too. He would find a better home, I was sure. One where he could be appreciated rather than abhorred. He had shown himself to be a friendly snake, so I hoped that his next home was able to return his friendliness. (Which is something I could not do.)

So it was much to my surprise on August 8th, the day after he was ordered to leave, that he appeared in my barn.

I was down in the barn, talking to a fellow who is doing some work on the barn. Suddenly he said, “Well, at least we know where the snake is today.”

I looked up and THERE that snake was, hanging from the rafters above my head, above my horses. Slinking along. Enoying life. Living it up.

Did he not have a calendar? Did he not know that he was evicted last night at midnight?

I thought I was going to die.

I headed back to the house, mumbling out loud to myself the whole way. “Snakes above my head,” I muttered. “Dangling from the rafters…Living in my pink cat house…My horse should stomp you…I can’t live like this….Go away…..”

A couple of hours later, I heard some commotion in the yard. One of the guys had caught the snake. I rushed outside to help formulate a plan to find the snake a NEW home. They were able to catch it when it came down from the barn rafters and was crawling through the hole that the chain that locks the farm gate goes through. Did I describe that well enough? It’s the hole through the barn wall that holds the chain that locks the horse gate. It’s the hole that you stick you hand in BLINDLY because you can’t see the other side. Oh really? He was slithering through the very place I put my hand many times a day to lock or unlock the gate? OMG. Why don’t you freak me out a little more, Mr. Snake?

We decided to relocate the snake a few miles down the street. There was a wooded, undeveloped subdivision on top of a hill. The owners had filed bankruptcy and the area was never developed. I went to get one of the plastic containers I used for the chickens when they were baby chicks. We—now, by “we” I mean “they”— got him into the container. Put the container on the back of my truck. And we moved him to his new home, away from my barn and my head and my hand and my horses. 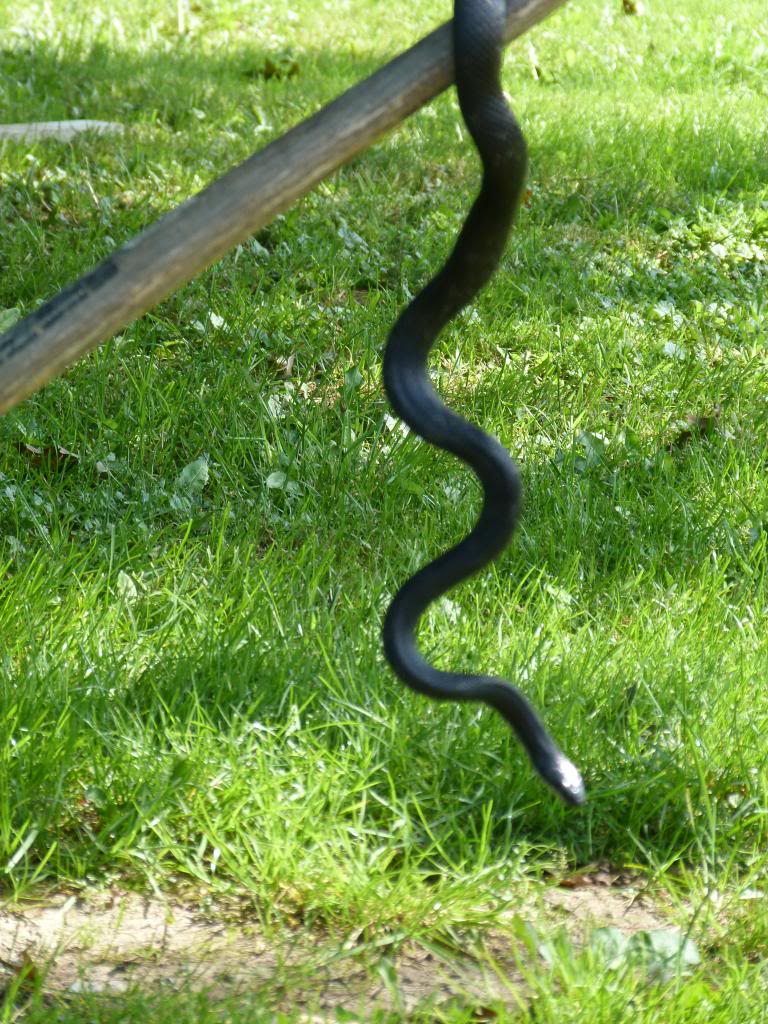 I made a video of the adventure. I can’t include a video on this blog host program, so you’ll find it at www.rebekahteal.com.

And then I came home and felt PEACE.

I even walked to the barn that evening IN THE DARK to see my horses. Put my hand through that hole to unlock the chain to the gate. Not a care in the world. Life was good. The snake was gone. This was the way it was BEFORE the snake. Humming along, singing a song. I used to come to see my horses every single evening to bid them goodnight; to give them a kiss and a treat. And yes! My chickens are safer now. Their future eggs are safe. I can relax.

Peace in my barn.

Now, don’t get me wrong. I thought about that snake, worried a little. Asked my husband before I went to sleep, “Do you think the snake is okay? Was that a good place for him?” Yes, I hoped he found a safe and secure place to hide, and lots of food to eat. But I felt good about relocating him. Real good.

I found this fun recipe and plan to make these over the weekend, just to celebrate.

Janet wrote me the sweetest email after my last post about the snake.  She told me that 2013 is the Chinese year of the Snake, the BLACK Snake.

“2013 is the year of Snake, the black snake. According to Chinese astrology, black is the color of space, arctic night, darkness on the Abyss, deep, deep waters. The Black Snake will bring people unexpected changes, instability, and changeability. In the year of Black Snake, it is important to plan everything beforehand, and evaluate adequately before taking any actions. They say that you need to be more careful and cautious than ever.” So they ya go! How funny is that?

The next day, the worker guys called me to the barn. They had found a snake in the pink cat bed. Again.

My peace was over. It was nice while it lasted. So short-lived. Those 20 hours were really, really nice.

The guys told me that this snake was bigger than the one we moved 20 hours ago and not as friendly as it. This one is kinda mad, they told me, “grouchy.” They thought that this one might be the male, and the one we relocated the female. Oh goody. Isn’t that super news?

The guys tried to catch this snake, but he was too fast and wily. It slithered off into that pile of pine tree branches we have beside the barn. He was also aggressive with them: it curled up and raised up to strike.

Later in the day, I went into the barn GINGERLY to plug up an extension cord so that I could run a fan in the window of the chicken house (it was unusually hot today). When I stepped just inside the barn to do that, I happen to look to my right and I saw YET ANOTHER black snake. This was not the same black snake that went into the pile of tree branches. This one was smaller and curled up under some weeds, taking a nap. Offspring, perhaps, of the other two?

Lord have mercy. There is no peace in my barn for me. It is snake infested.

I won’t put out poison and I won’t harm them, so what is a Farmgirl to do?