“Opa”! I first heard that expression in 1976, when my parents took me to the Greek Festival in Houston. I’ll never forget that day; the exciting festival with all the people, dancing, and scrumptious Greek food, handmade by local ladies my family knew. While I wasn’t raised in the Greek church (or speak Greek), my father’s mother was born in Athens, Greece. Though my grandmother’s been gone decades, she’s on my mind as I cook comfort food with the arrival of colder weather, and begin holiday baking, using her treasured recipes. 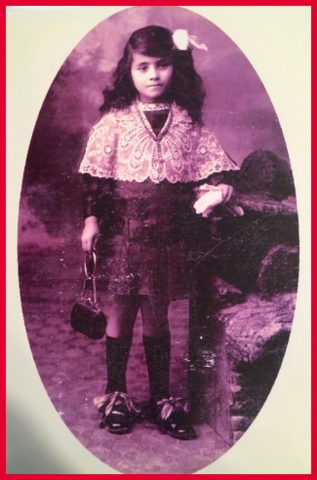 I don’t remember my grandmother well. Because my grandfather was Cajun French from Louisiana, instead of calling her the Greek traditional “YaYa”, she was my “Mam-Maw”. I remember sitting on her lap, and how she always had glamorous red nails and lipstick. It’s funny what childhood details one remembers. We’d visit their house in the West University area of Houston; a sturdy red brick with stone steps, always fragrant with delicious cooking. My grandmother raised chihuahuas. I wish I could show her my little chihuahua! My grandfather was an avid gardener, composting before most people knew about composting. My grandmother, well-known for her amazing cooking, was also an expert skeet shooter! 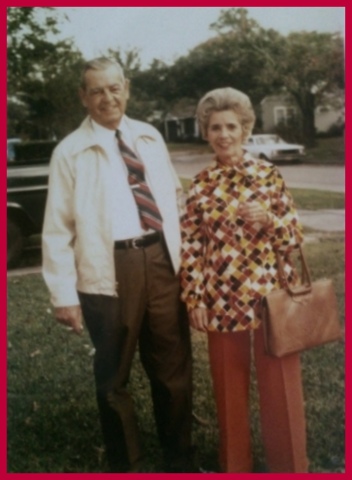 I wish I knew her story better, but even my father doesn’t remember all the details. From stories I’ve heard, she was strong and independent, a woman ahead of her time. Born privileged in Greece, as a child she suffered smallpox and was placed on a boat with her grandmother until she miraculously recovered. She later came to the United States at eight years old with her parents, landing at Ellis Island. The family settled in San Antonio, Texas, where they owned a successful bakery. At thirteen, just one year older than my own daughter {shudder}, she was married in an arranged marriage. Having her own mind, she divorced, and in 1938 wed my grandfather at twenty-nine. Raising two children, they were married thirty-nine years until my “Pap-Paw” passed. 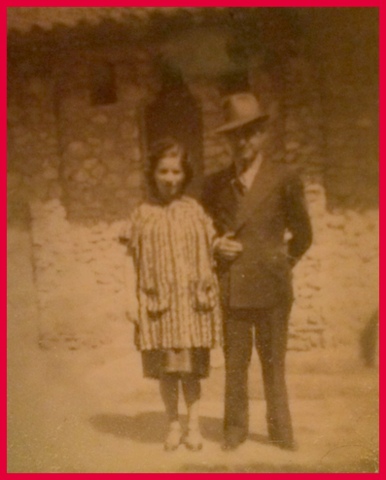 I don’t have much of my grandmother’s, except for a treasured linen tablecloth she embroidered, and a necklace containing my picture. I resemble her, evident in photos. 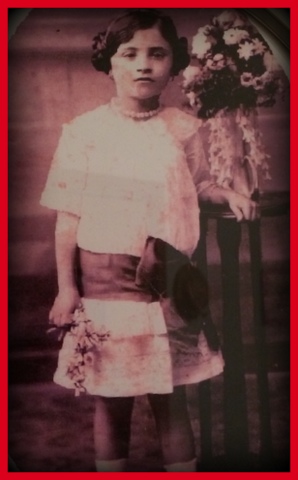 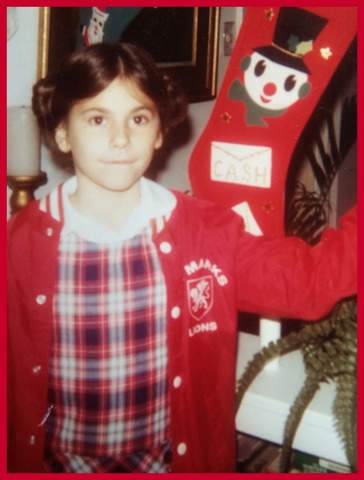 In high school, a gentleman I’d never met visited school to talk about about a crazy, new invention: “the internet”. When he saw me, he looked like he’d seen a ghost; he knew I had to be related to Diane. He’d known my grandmother when she was very young.

My grandmother died having never owned a cookbook. Her recipes were “pinch of this, dash of that”. She passed some to my mom when she was a newlywed, as her mother-in-law did when she married my grandfather.

For Mam-Maw’s spaghetti, brown one pound ground beef. In another skillet, brown a medium onion and four garlic cloves in 2 TBSP olive oil, until soft. Add to meat. Add one can tomato paste, one tomato paste can of water, several generous pinches cinnamon, and a splash of sweet, Manischewitz cherry wine. Simmer 20 minutes. Serve over spaghetti…fragrant and delicious!

I also love her “Greek-Style” Macaroni and Cheese, a souffle-like take on the ultimate comfort food:

Boil the macaroni ½ the time normally required (about five minutes). Drain and place in an rectangular, 9-X-11 buttered casserole dish. Beat eggs and milk together. Pour over macaroni, sprinkle with salt and pepper. Cover with cheese. Cover with foil and bake at 350o for around 30 minutes, until liquid dissipates and casserole is firm. Cut into squares.

My favorite “heirloom” is her Koulourakia recipe, a Greek cookie-like pastry. Often eaten at Easter, we have it for Christmas. 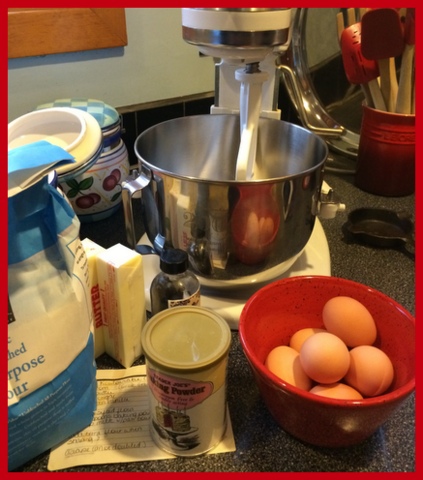 The recipe makes a lot, but can be halved or doubled.

Cream butter until light and fluffy. 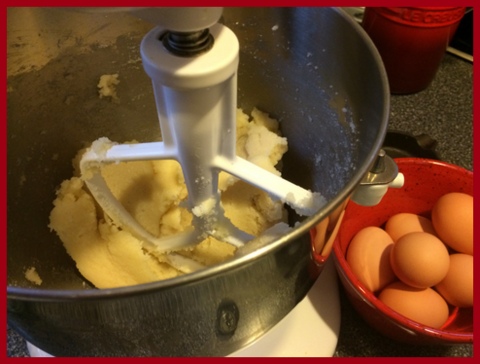 Add vanilla. Add eggs one at a time. Beat. Sift flour and baking powder together. Add to butter mixture alternately with milk. Using floured hands on a floured surface, shape into twists, and place on ungreased cookie sheet (I use parchment paper). 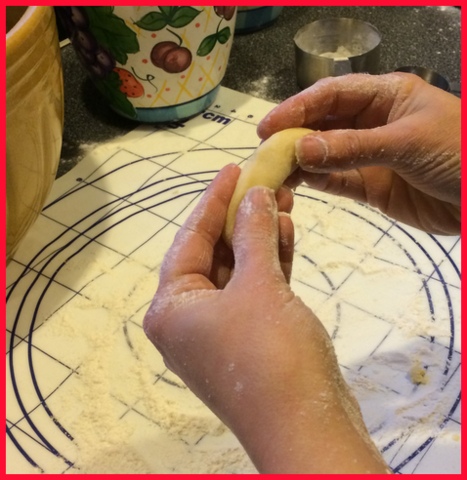 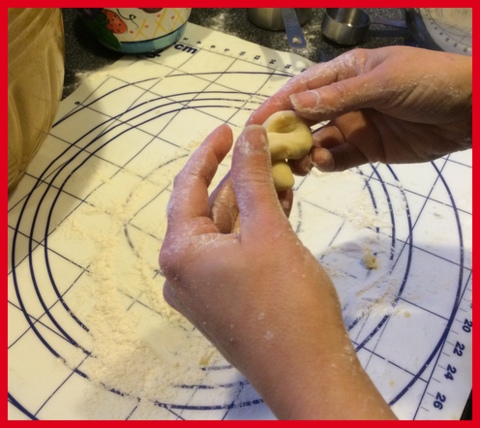 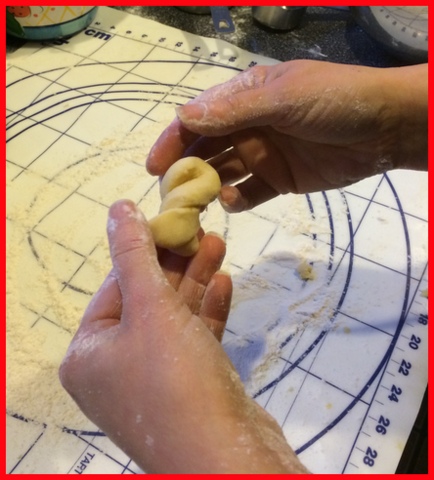 Brush tops with beaten egg and sprinkle with sesame seeds. Bake at 350o for 20 minutes. 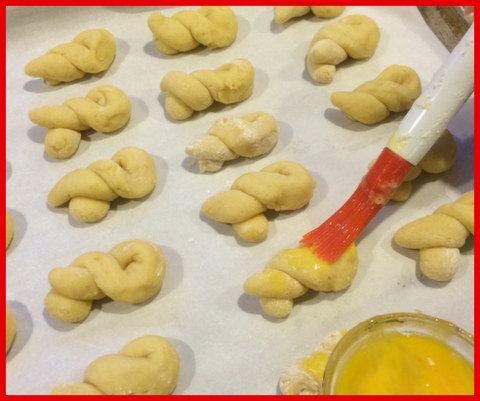 A silicone brush is gentle on delicate pastry…mine’s from Ikea. 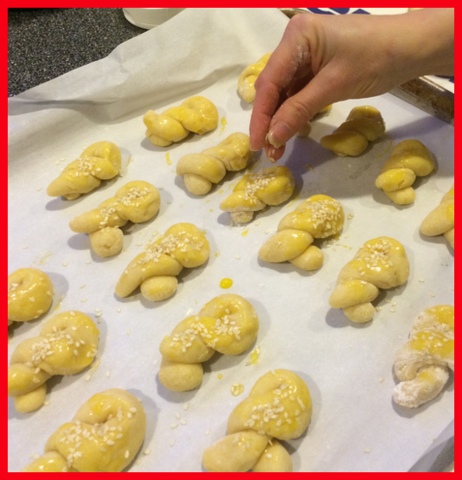 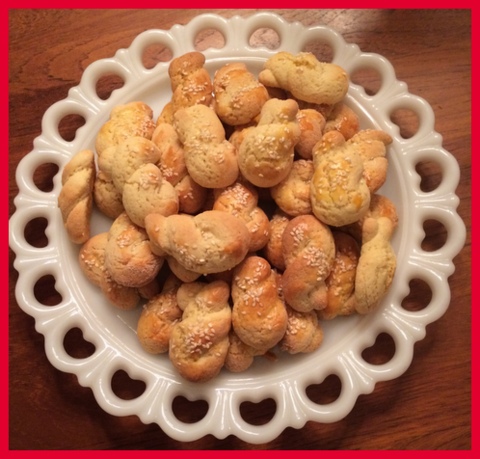 We eat these with coffee Christmas morn. They freeze and ship beautifully, too.

Daddy says when he eats my Koulourakia, it’s as if his mother made them. I like to think that would make Mam-Maw proud.