A History Insulated in Glass

Farmgirls look at many items thinking, “How can I re-purpose this?”  I love finding new, clever ideas for ordinary or discarded objects. Often bitten by the “collector” bug, one of my favorite things to re-purpose are old glass insulators. While I’ve loved these colorful, shapely pieces of glass for decades, I never really knew the exciting history behind them. 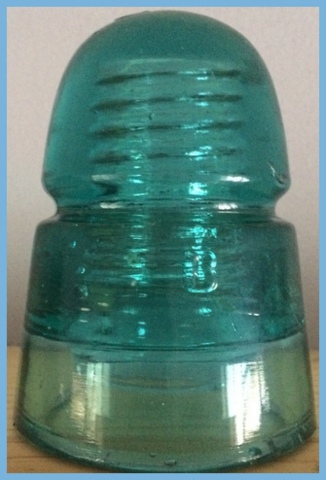 I met Mary Pitcher Leibold when I purchased some beautiful insulators from her through a tag sale recently. The ones I purchased from Mary were different looking than others I’ve picked up at flea markets through the years. Mary and her husband, John, have been collecting and selling various insulators for years. As a young child, John and his father would walk up and down along train tracks, collecting discarded insulators that had been thrown down from the telephone poles.

Glass insulators were originally designed as conductors and protectors of wires on the tops of telegraph, and later, telephone and electricity poles. The earliest insulators were made from the mid-1850’s, many produced in factories here in the Northeast. The shape and markings on an insulator are clues to its age and origin. Some of the oldest examples are “Brookfield B’s”, manufactured in Brookfield, New York during the 1800’s and early 1900’s, named for their “beehive” or “bell” shape, and usually found in shades of green and light aqua. Hemingray insulators, originally named in the late 1800’s after designer Robert Hemingray, had factories in several states. Whitall Tatum was another factory, located in Mellville, New Jersey, producing light aqua and clear “petticoat” shaped insulators until 1938. Whitall Tatum was then purchased by Armstrong, and eventually later became Kerr glass. Production of insulators by Kerr ceased in 1976.

To make our playroom with its high ceilings cozier, I designed and built shelves around the perimeter of the room. “Brookfield B’s” look right at home nestled among other “treasures”.

Various insulators were produced and used until the 1970’s, and were frequently changed. When one became damaged or obsolete, it would be discarded and thrown to the ground below.  Mary says that long ago, Italian immigrants would be paid $1.00 a day to collect broken insulators to be melted down and made into new replacements. Because of this, many popular Hemingray “42’s” and “43’s”  will have lots of little rocks inside the glass. Mary says some insulators will have pock marks from old BB guns.  Often times, the first of a mold would have a penny indentation indicating the date of production.

Insulators are now found across the country in antique stores, flea markets, tag sales, and on Ebay. There’s sites, clubs, and even trade shows dedicated to serious collectors. The most common colors for glass insulators are clear, green, aqua and blue. Prices depend on color, age, condition, and how common the particular piece is. Some clear ones are dyed into bright colors or melted to change their shape.  While pretty, to serious collectors, these hold only novelty value. (Unfortunately, the process of irradiation has also allowed more common insulators to take on the appearance of rare colors, so if you see something listed as an expensive, rare collectible, make sure you are buying from a reputable dealer).

Mary says the majority of insulators in her collection she decides to part with and sell are often purchased for crafts on Etsy, as pendant lights, as planters, or deck rail decorations. The grammy-winning band Bon Iver purchased over a hundred insulators from Mary to use for stage lighting!

My daddy kept colored glass insulators in the kitchen windowsill at his ranch in the Texas hill country.  As a kid, I loved watching sunbeams play through the glass, (making dish washing less of a chore). As an adult, when I’d see reasonably priced insulators at flea markets, I’d pick a few up.  I still love one in a windowsill, as a sun-catcher. 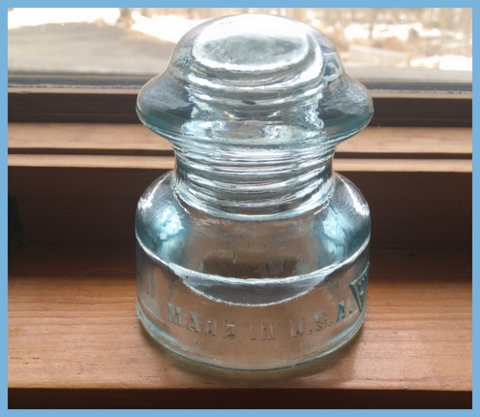 A Whitall Tatum catches light in my kitchen.

I love placing glass insulators among my plants in my flower beds, like tiny gazing balls.  It’s an unexpected way to add color, vintage whimsy, and fill in a bare spot among the flowers. Designed to be used outside, they’re pretty hardy; just make sure to bring them inside before freezing temps, so they don’t get broken from freezing. 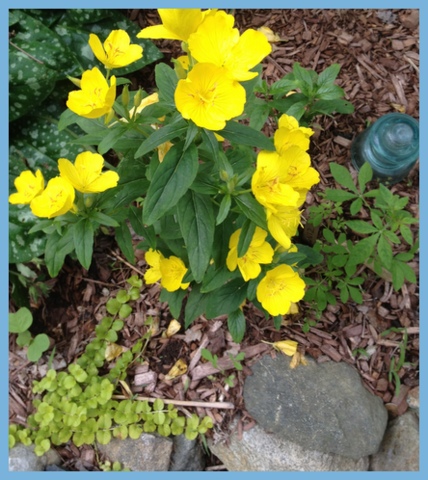 An insulator graces a spot in the flower bed until the spider plants get bigger. Below, one catches the light among houseplants on an antique cart. 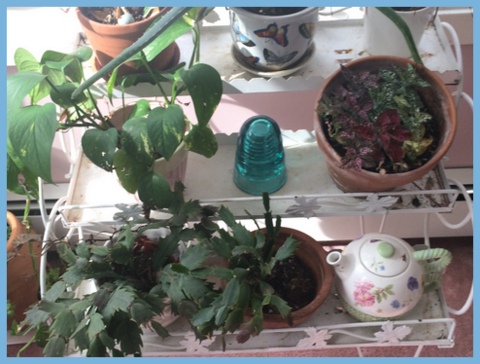 My new favorite way to re-purpose insulators is a brilliant idea from Mary.  Simply place a battery-powered flame-less “tea light” beneath the insulator. This looks lovely along deck rails or on coffee tables, is safer than traditional candles, and doesn’t change the integrity of the insulator.  So cute! 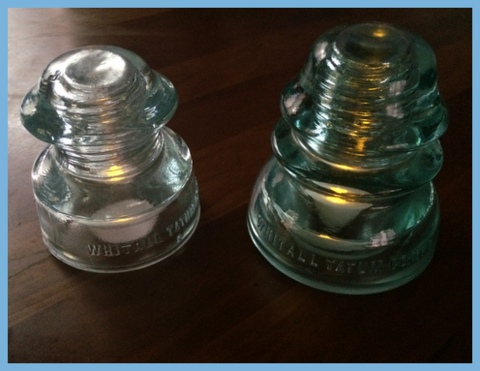 I’m constantly moving mine around here and there.  When I pick one up, it’s no longer just a pretty glass decoration. Now I think about it’s origin, ponder the person who made it, and the journey it’s been on…a tangible piece of Americana.

Do you collect old glass insulators, too?  How do you like to re-purpose them? Share with me in the comments below!