A Tale of Three Cities

Just kidding, it was just regular times—most of them great! We just finished up a two week trip to Minnesota to attend the wedding of my little brother. It turns out he isn’t so little anymore, and I couldn’t be happier for him and his new wife. It was a beautiful wedding on a lovely Wisconsin farm.  The weather didn’t cooperate but it helped prove that their love conquers all! After six years of getting to watch them grow in love and life, their marriage is sure to be a great one. 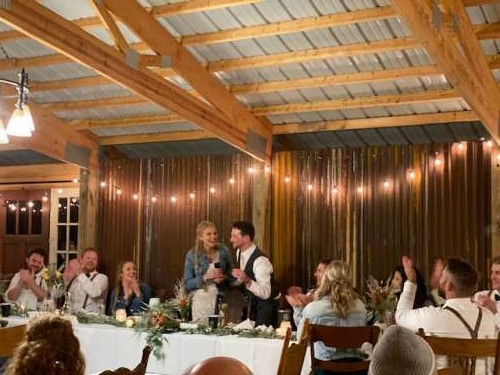 The adorable couple during the reception. What an amazing farm building!

After a few days of writing and pondering, I’m looking down at the Twin Cities from a soaring airplane. I can see the skyline of Minneapolis fade and give way to meandering streets making up neighborhoods of manicured lawns, many surrounded by big tracts of forest or farmland. Some have pools. Many neighborhoods have nearly identical rooftops lining the roads. A few more miles and I would see the houses are few and far between, the cities smaller, the tracts of forest and farmland larger. However, it doesn’t take long to get above the clouds on this stormy day. 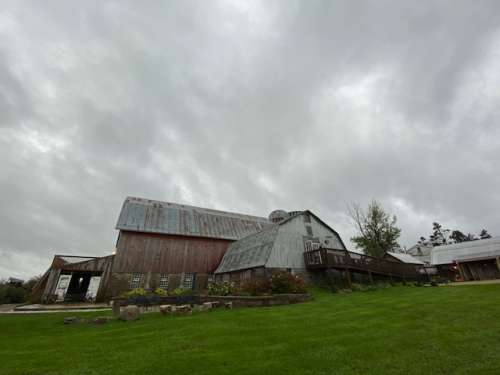 Barn that the wedding was in, the clouds obscured the ground before we could gaze at farmland from the plane.

While visiting the midwest I spent time in two distinct places—the Minneapolis metro area and the greater Madison, Wisconsin area. During the wedding and in my travels I am often asked about life in our little city of Palmer, Alaska. For one friend I described where we live. It is only a mile outside of the tiny downtown of Palmer—but it definitely has a “suburb” feel. Even being a “rural” town, it has the same feel as neighborhoods outside both Minneapolis and Madison, just on a smaller scale. Instead of miles of interlocking roads and neighborhoods, we have a handful of streets with only two entrances from the main highway out of town. 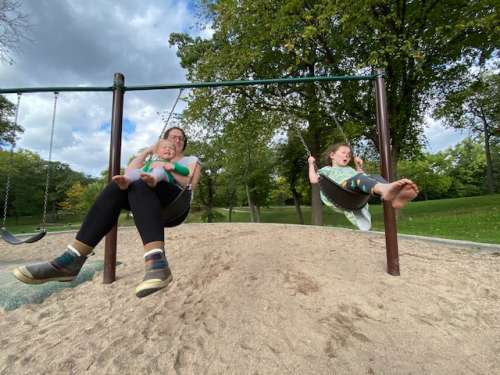 Playgrounds make city and suburban life awfully fun! This is at a nice park in South Minneapolis.

These three cities, while all decidedly Midwestern in their feel and appearance (yes, even Palmer feels Midwestern thanks to the Minnesotan, Wisconsinite and Michigander colonists who settled there). Palmer is an agricultural town settled in the mountains. It draws creative, do-it-yourselfers who value independence, intelligence and adventure. The residents love coffee, pizza and barbecue if the restaurants are any indication. Madison is a college and capital town bustling with young energy, experienced innovation and the power of tradition shining through long time residents and new implants to boot. The hybrid of science, arts and politics breeds amazing opportunities and draws in wonderful talent. Minneapolis is an old mill town set on the banks of the mighty Mississippi. Post it notes, Cheerios and Target were all born from the perseverance that a town like Minneapolis fosters. People must be resilient and ambitious during the long cold winters and mosquito filled muggy summers. 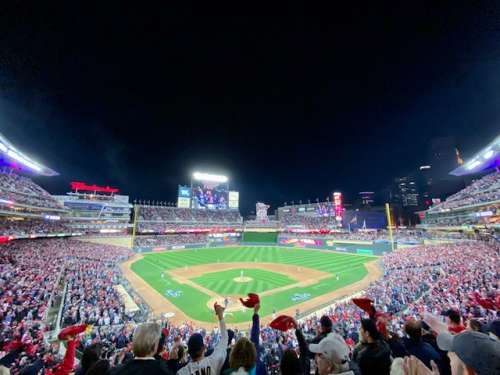 Sports are a big draw in city centers. Here is Target field in Minneapolis. The Twins didn’t disappoint in their usual ability to disappoint :). They lost this final playoff game to the Yankees pretty badly.

In Alaska we live in a neighborhood that is named after trees that don’t grow there, just like the streets in suburbs of other cities. There are green lawns and hanging planters full of cascading petunias. The sound of lawnmowers fills the air on weekend days and we wave at neighbors while they shovel their driveways on winter days. Dogs bark at passerby and swingsets sprinkle private-ish backyards. Even though we are only a mile outside of town we must drive because the only way into town is a highway that I refuse to walk or bike with children. Downtown Palmer is similar to other cities—sidewalks lead the way to restaurants, businesses and community services. People who live in town can walk to pretty much any amenity they might need. One could easily cover all of downtown palmer in an hour or so It’s like living in downtown Minneapolis or Madison, but the buildings are much smaller and there aren’t as many cars and buses zooming around. We also don’t have electric scooters! Just five miles outside of downtown Palmer is farm country, but the suburbs are encroaching as developers purchase large tracts of land. The “suburbs” are eating up rural land just like they do in other growing cities. 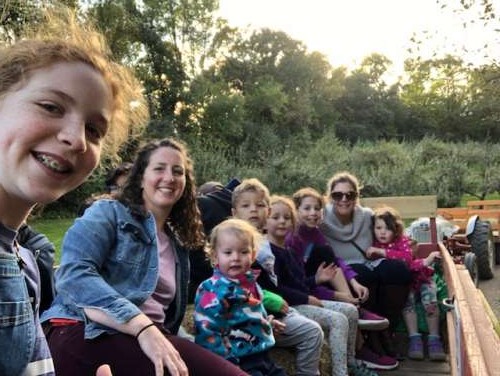 When in the suburbs you can go to a pro baseball game one day and ride a tractor hay ride at an apple orchard the next, nearly hassle free!

I went to university in Madison, Wisconsin way back when, and I still have some good girlfriends there. After a week and a half of solo parenting including flying with the three girls by myself, Evan graciously offered me some “time off” so I could go visit them in our old stomping grounds. As a student in Madison, I rarely ventured out of downtown/campus. Turns out that Madison is sprawling! My now adult girlfriends live on opposite sides of the city, and I was surprised at how long it takes to navigate between the two. In each of their neighborhoods I found myself noting that it felt just like x, y or z neighborhood outside of Minneapolis, Palmer or Anchorage. Madison is a mid-sized city, so the “suburb” kind of neighborhoods extend between two and five miles outside of the city center. Go another five miles and you are in the beauty of Wisconsin farmland! The feeling is the same as our little town in Alaska, but the scale is larger. Of course, the university and government centers in Madison lead to a much different culture, but thinking about the bare bones of the city, it’s just like a big sister of our midwest feeling Palmer. The main drag between the capitol building and campus takes a couple hours to explore, and another hour or two could cover a few more hotspots before hitting the surrounding neighborhoods and streets named after trees that are no longer there. 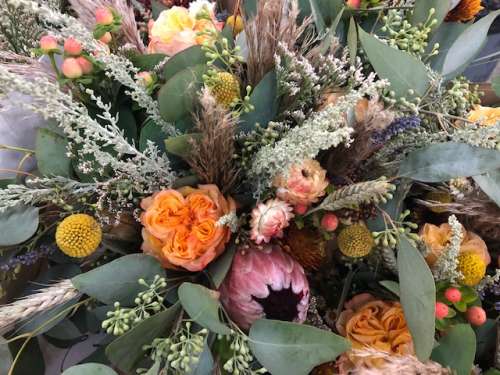 The bride’s bouquet. Being close to a major city we were able to get flowers wholesale and make the arrangements. Field bouquets in the city! Love it.

Spending time at my mother’s suburban home outside of Minneapolis is the most familiar to me, as I grew up there. We moved into the house when I was three. At that point there was still a large strawberry farm down the road. My brothers and I could walk though the woods and find a stable with horses, one of our elderly neighbors had a huge veggie garden and some outbuildings; but it was still considered the suburbs and it has become steadily more suburban as the decades go on. We were close to the edge of suburbia back then, but now it extends some twenty miles further in all directions outward from the city center. In heavy traffic it can take almost two hours to get across the twin cities metro. Woof—one thing about the Twin Cities that I really cannot tolerate is the traffic! I commend any of you that deal with truly heavy traffic on the daily.  Farmland within an hour of the metro area is scarce and prohibitively expensive, hinting at the likely development of prime farm properties. 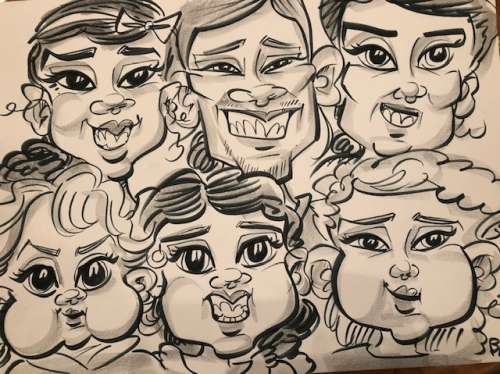 Caricature of our family and one cousin from the wedding. Can you tell who is who?

In college I pursued environmental studies and I remember from a class on the “Social Aspects of Environmental Studies” a little lesson on the development of suburbia. The streets were designed to be meandering and directionless to help foster a feeling of country life—there were no grids like the city. Natural names including tree, plant and animal names were common. They give the illusion that the residents are closer to nature while also maintaining a desirable distance from the city center where many residents worked. It was the best of both words—the convenience of city life mixed with the wholesomeness of country life.  While I live in a fairly rural town, now, it is growing and becoming more like larger cities. At this point in life, I’m edging toward Suburban Rural farmgirl, and there’s nothing wrong with that, but I’d love to be more rural! 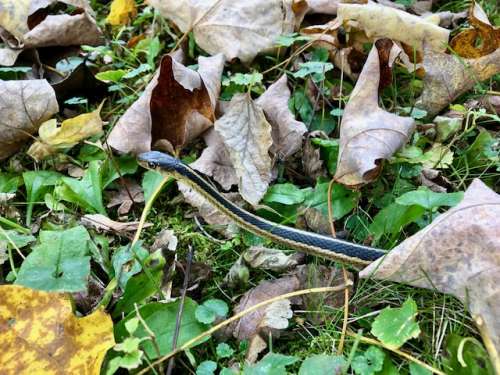 There is still lots of wildlife in the burbs. This little garter snake was awfully used to people. I think it would have let me pick it up if I tried!

While none of these observations are ground breaking at all (of course this is how cities are organized!), I found it interesting to ponder these different yet similar places in my life–especially in terms of their basic organization.  Human behavior replicates itself again and again in different scales and different climates.  We are pretty amazing creatures in our differences and similarities just as these cities and cities around the globe are. Hmm…something to think about as we explore our little corners of the world!

Happy October, all!  I hope it doesn’t get too spooky for you out there!