Posted on May 1, 2018 by Suburban Farmgirl Nicole Christensen 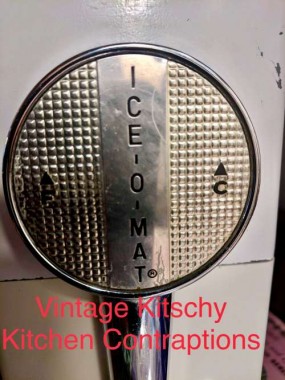 Put me in an antiques, thrift store, or flea market, and I never want to leave! My favorite treasures are pieces found for my kitchen. Retro kitchen items from the ‘40’s to ‘60’s give my kitchen a happy, vintage vibe. I especially adore Atomic age, kitschy kitchen contraptions with names that sound like they’re right out of an episode of the Jetsons!

When I met my friend Andrea years ago, the first thing I noticed in her kitchen was a shiny metal object. Memories from childhood flooded back – it was an “Ice-O-Mat!” The name alone makes me want to burst into giggles! 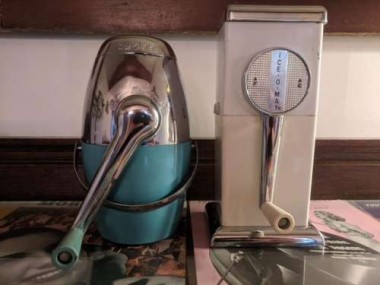 Meant to grind ice into chips, my parents had a red-and-white model that’d come out at parties, or, whenever anyone was sick, my daddy would crank out bowls of chipped ice to get fevers down. It was just ice, but somehow having come out of the “Ice-O-Mat” made it seem like something more!

Founded in 1932 in Missouri, the Rival company became known for small kitchen gadgets. The name today is still used for small kitchen appliances (most remember Rival for the “Crock Pot” line; it no longer bears the Rival logo). Before they became known for their little electric appliances, Rival originally produced small die-cast metal gizmos with hilarious names ending in “O-Mat”. 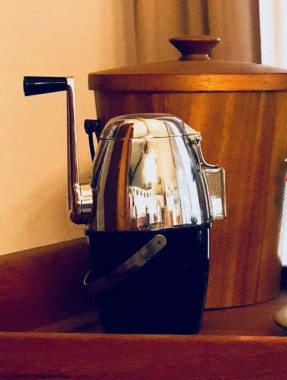 I found MY first “Ice-O-Mat” last summer at a Vintage Camper Rally swap. Not the same square model my parents had, it’s the “Bullet” design. It took some time to figure out how to open and close this art-deco-looking model, but it’s really ingenious- the bottom becomes a mini ice bucket! I thought it’d look cool sitting with my vintage glassware.

After years hunting, I finally found THE same red-and-white, “Vogue” model my parents had! Easy to use, it crushes ice perfectly, just as it did when first made in the 1950’s! I have an automatic ice maker in my fridge, with ice shoot and crusher. However, did you know that those are a source of major germs? Think about it…you can’t exactly clean inside, and when we use ours on “chip”, ice just goes flinging about the kitchen. 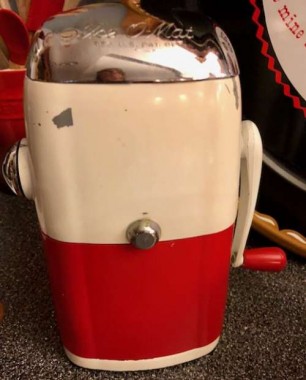 Another item my friend Andrea swears by is the “Juice-O-Mat”. Andrea, an elementary school teacher, loves to bring her “Juice-O-Mat” to show her class. She says little kids get a big kick out of it, and the simple metal construction is basically indestructible! 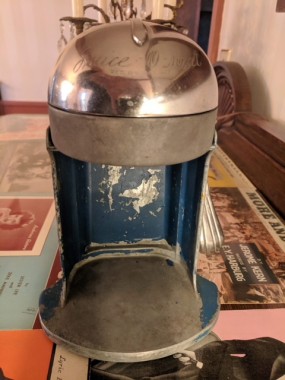 On that same outing where I found the red ice crusher, I found a vintage “Juice-O-Mat” as well! 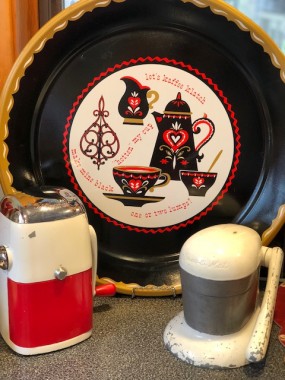 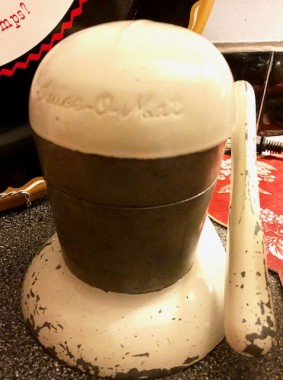 The white one I found has a patina that shows years of use. Unlike other juicers of the time, the “Juice-O-Mat” is all metal (made by another manufacturer of the era, the “Juice-King”, had Bakelite handles. Reproduction “Juice-King” models from the late 70’s had plastic handles). Place a half a lemon, lime, or orange in the “Juice-O-Mat”, push the lever, and VOILA! There’s more juice than you’d ever expect from one piece of fruit- seed and pulp free! We “juice” every morning, but for a quick bit of juice for drinks or salad dressing, the “Juice-O-Mat” is effortless and easy to clean.

Falling down that magical rabbit hole known as “Etsy”, (Hello, my name is Alice…), I found a slew of fun, vintage Rival kitschy kitchen products.

There’s the “Shred-O-Mat” for veggies, “Grind-O-Mat” and “Protect-O-Mat” for meat, and the early electric “Broil-O-Mat” tabletop broiler and “Steam-O-Mat” iron. (Admit it, those names make you smile). My husband and I ended up buying a “Can-O-Mat”. The “Slimline” model is a heavy manual can opener that attaches to the wall. I think it’s the name that sold us. 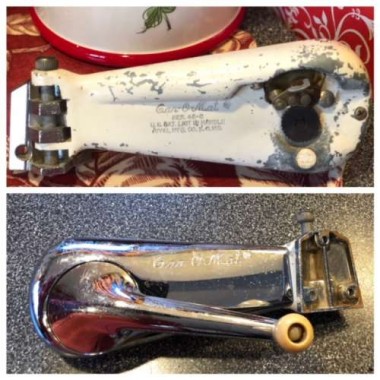 White on one side, shiny 50’s chrome on the other! It was marketed as the “World’s Most Sanitary Can Opener” at the time of production, with an ad reading something like “keep the dog food out of the children’s food”. We still have to figure out how to attach it to a wall to use.

I remember reading where MaryJane once wrote how people used to not go to the gym because they burned calories in their everyday lives doing chores. In the kitchen, they mixed and ground food manually. My family loves coffee, especially fresh-ground. We’ve been using an electric coffee grinder for years, but lately it’s spitting coffee grinds everywhere and the cord’s so twisted up it’s worrisome. Seeing a red-handled, vintage Rival coffee grinder, we had to try it! (Hubs said even if it didn’t work, it’d look cute in my retro-inspired kitchen). 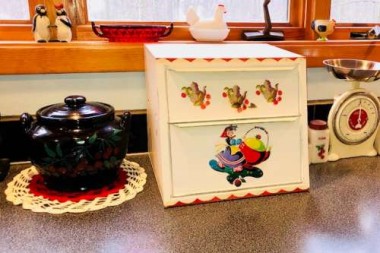 Having a “retro-inspired, kitschy kitchen’ makes me happy!

When it arrived, I couldn’t wait to try it! (It’s Rival, though not marked “Coffee-O-Mat, we still call it that). 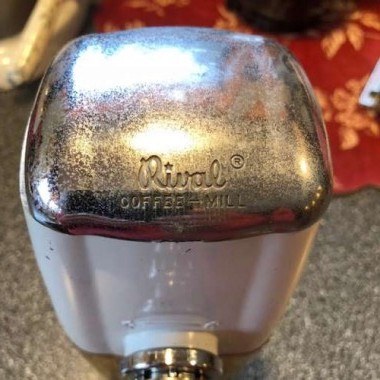 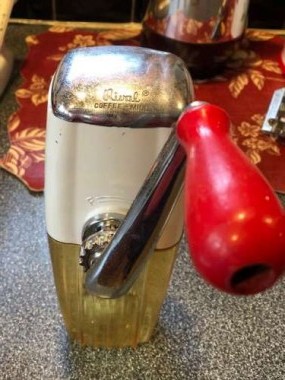 The seller forgot to mention though outside was mint, inside there was a great deal of rust. Not to be deterred, I simply used an SOS soap pad, along with a wooden skewer to polish the metal with the pad inside so my fingers wouldn’t get injured. Steel wool soap pads are good for cleaning the outside of years of grime, as well, as long as you use a light touch so you don’t scratch or damage paint. 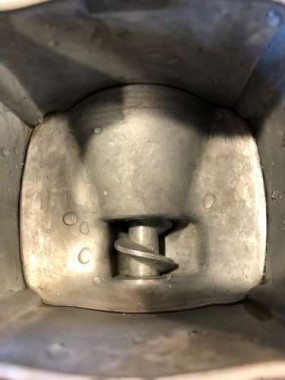 The inside gleams, and the grinder’s amazing! It’s a bit of a workout, but after getting the hang of it, we never want to use anything else. It’s not the fastest way to grind coffee, but look how perfectly it grinds! 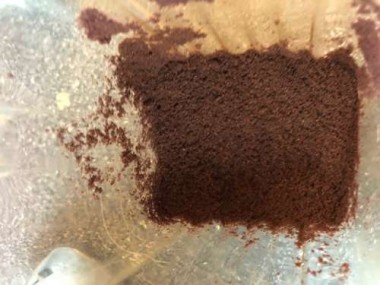 The result is a smooth, delicious Cup-O-Joe! (Perfect for Glamping, too). 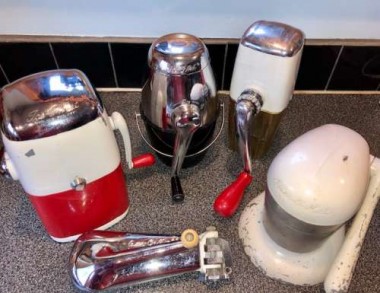 In the end, faster, electrified products won over, (eventually becoming “disposable”, since nowadays small appliances don’t last very long). Our grandparents had it right…things “back then” were bursting with charm and meant to last! I’m glad I can find “oldies but goodies”; they are making me smile still!

***Dedicated to my friend, Andrea…our “junktiquing” and fun adventures sometimes “rival” those of Lucy and Ethel!