I’ll be up front: I’m no stealthy nutrient-pusher, a la Jessica Seinfeld. You remember Jerry’s wife, and her book about getting vegetables into your kids by lacing their mac ‘n cheese with cauliflower puree and their peanut butter cookies with carrot mash? Partly my objection to this way of cooking is my own sheer laziness: I hate fiddling with Cuisinarty appliances, even plain old blenders. And partly it’s principle: I think good food should speak for itself without concealment.

(I mean, I love peanut butter cookies and I adore carrots. But together? They’re no heavenly Reese’s-style collision waiting to happen! Chocolate chips in the batter, yes. Carrots? Yikes!)

That said, I have one sneaky dish that I make every fall just to see if anyone notices. Well, and because I adore it. 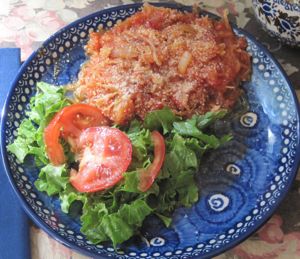 It starts with this humble, homely ingredient: 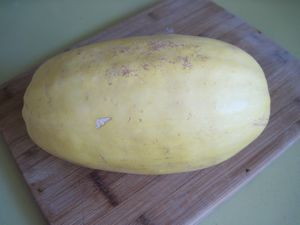 Nothing finer on a fall day than spaghetti squash transformed into its namesake in time for dinner. Easy and delicious — and you can safely eat a whole lot more of it than a big plate of pasta. (Thus leaving room for a dessert of p.b. cookies, the real kind!)

The first time I invented my version of spaghetti-squash-spaghetti, my daughters were well into their second helpings before someone spied an errand seed.

Child on verge of freakout: “Euuwww! What’s this?”

Child (suspicion mounting): “From what?”

Me (realizing I’m busted and stalling for time): “Oh, well, um…are you sure it’s not an onion?”

Time to confess. (Although this little exchange dragged out the meal so that a few more bites were finished before the truth would out.)

Youngest daughter – after seconds, mind you – promptly gagged at the very idea of squash masquerading as pasta and swore she’d never ever in a hundred billion centuries eat it again. Middle daughter, who’d quizzed me, rested her case and immediately declared herself full and finished, pleasemayIbeexcused. Oldest daughter shrugged and kept rolling forkfuls with me.

Up to you whether you’re frank or coy when you whip up this dish. Just try it! Pick a cold day when you’re short on time. Yum! 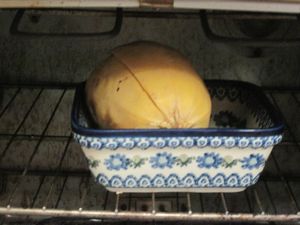 Start by roasting a nice, yellow (not green-yellow) squash. I wish I could tell you an exact time or temperature, but alas I’m Paula Spencer and not Paula Deen. I just stick the squash, whole, but with a couple of lances of a sharp knife for steam to escape, into the oven in a baking dish or a cast iron skillet. Roast at about 400 degrees for about 40-45 minutes, until it’s soft and maybe starting to brown a little bit. Then I take it out and let it cool. (Some people cut it in half before roasting, but it’s such a tough thing to cut, this is too much effort for yours truly the Suburban Farmgirl Chef. Who Never Met a Kitchen Shortcut She Didn’t Like.)

Sometimes, in fact, I cook it first thing in the morning, before I forget. Then I let it cool all day. At dinnertime, I get started again. 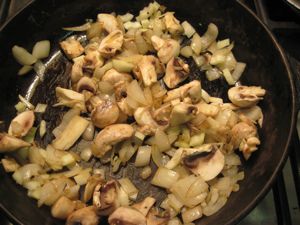 In a little olive oil, sauté a chopped onion, some cut-up white mushrooms, and a couple of diced celery ribs. (Or whatever else you like to add to your spaghetti sauce: I can’t abide garlic, for example, so I leave it out, realizing this makes me an oddball in the world of Italian cuisine. But fresh basil or oregano have possibilities. Yellow squash? Zucchini? Carrot or cauliflower, even – just don’t mash it please, Jessica.) 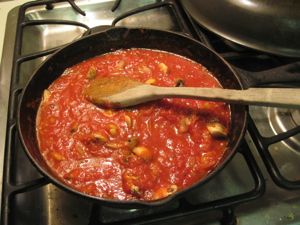 To the sautéed veggies, I add a jar of premade spaghetti sauce. Obviously the true chefs and tomato-growers among us will instead keep on making homemade sauce, at this point. (Anybody want to tell me how???) I do hunt high and low – and pay too much extra – for a jar that contains no sugar or multisyllabic mystery ingredients. This is harder than you’d think! And why does it cost more to buy something with fewer ingredients?! 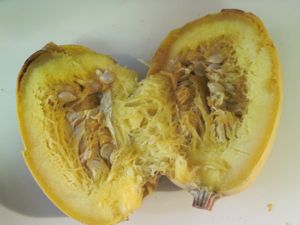 Now the fun part. While the sauce heats up, I cut open the roasted, cooled spaghetti squash (lengthwise, in half). First scoop out the seeds and goopy bits at the very center. Don’t get outed later by an errant seed! Then you get to start combing. 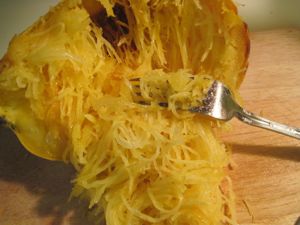 Using a fork , comb along the sides to pull all the strands out and apart. The more you pull, the more “spaghetti” piles out! It never fails to astound me how many strands were compacted inside that smallish orb — at least four generous servings-ful. 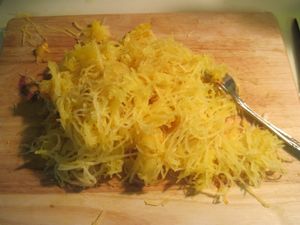 Heat up the strands in the microwave for 30 seconds or so (if they’re not still warm) and place in your serving dish. Now add the sauce. Top with grated Parmesan cheese, bring to the table, and say, “Schiacciare!” 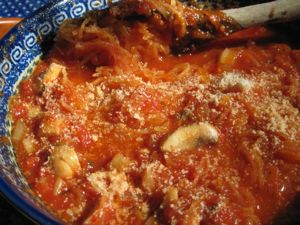