What Makes Fall Smell So Swell?

Walking into a bakery this week, I sniffed the allspicy, gingery splendiferousness of pumpkin pie. Okay, so my sniffer has been pumpkin-programmed ever since I wrote about the great pumpkin shortage last week. (I’d like to say I walked into *my kitchen* and smelled the pie, but alas I haven’t yet mustered the courage to roast and mash and bake with a whole pumpkin…but thanks for all the great tips…will keep you posted!)

That spicy pie smell, I realized, is just one of the reasons I’m so invigorated this time of year…

Every season has its matching scents (Christmas trees and gingerbread in winter, suntan lotion and cut grass in summer, dirt and soap in spring). But me, I’m a Fall Girl. And I say that *this* is the best-smelling time of the year.

Exactly why, I’m not sure. Is there a quintessential scent to fall? Something particular in the crisp autumn air (or inside a cozy house after a day raking leaves) that so fills me with gladness? Is it…

* Those pumpkiny-cranberry-walnutty fall baking smells? (See what’s on my mind!)

* Wet leaves? The distinctive, earthy mustiness is even better than… 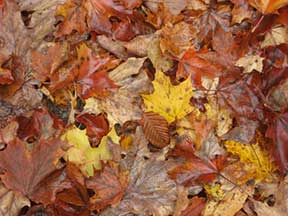 …the smell of dry leaves (which have more ear-pleasing crunch than nose-happy sniffability).

What fall smells like is no small question! Smells lodge deep in the mind’s memory system and in fact are linked to the parts of the brain where emotions are stored. That’s why they’re so evocative for us – and so longlasting. One whiff of your late grandmother’s perfume on a stranger in a crowded mall and you swear you could turn around and see her standing there.

Here’s more of my what’s-the-best-autumn smell countdown. Which do you think captures the season best?

* Pinecone potpourri? Here’s a bowl set out on a family room table; I fill it with dried goodies and sprinkle a little cinnamon over the top, a sort of homemade potpourri. 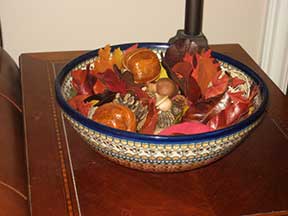 * Woodsmoke curling from a chimney down the block? A crackling fire is more of a wintery smell, I guess. But fall is when people with fireplaces get stoking around here, and I love to pass the smoke-in-the-air houses on a chilly evening’s walk.

* A bowl of fresh apples? Growing up in Michigan, I’m partial to the MacIntosh I used to pick. This foto is a mix of North Carolina Mountaineer, Macoun, and Empire, I think. But yesterday I bit a sweet, crisp Sierra Beauty for the first time that made me make those “ooh mmm mmm ” sounds with every bite (swoons once reserved for richer goodies like pumpkin cheesecake…or chocolate!). 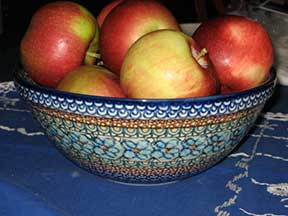 * Hay bales? No, I don’t have them lying around my backyard. But they’re everywhere at farmers’ markets and pumpkin patches, a kind of fallish décor that’s dry and sweet and well, fallish!

* Crayons? I read somewhere that this is one of the most enduring scents – a little late for back-to-school now in this last month of autumn, but I thought I’d toss it in as “fallish” anyway. Sniffing Crayolas is also supposed to stimulate creativity…good excuse to run out and buy a 64-count box, just for you! (I still have a vintage box I bought before they changed all the names of the colors to oddities like Bear Hug and Super Happy –brown and yellow, respectively, which were introduced for the 50th anniversary celebration of the 64-count box last year.)

What do you think? Is your favorite fall scent something else? (Bright orange marigolds? Dew-damp wool blankets? Chicken soup?) I bet geography plays a role, too – in New York City, it’s roasting chestnuts on the sidewalks!

Or maybe you care to challenge me on my autumn-smells-best assertion. Go ahead, make your case! Cast your vote! I’m ready to go nose to nose!

Leave a Reply to carol branum Cancel Your Response