A Day Away…Beat the Heat with a Farmgirl Roadtrip to Newport, Rhode Island

Whew!  If you aren’t currently experiencing a heatwave, you’ve no doubt heard of the dangerous one we’re dealing with here on the East Coast. Waking up to a scorching, humid day, we decided to hit the coast and go North.  When it’s too toasty to do much, it’s always a few degrees cooler near the ocean.  Come take a farmgirl road trip with me to beautiful Newport, Rhode Island, one of my family’s favorite relaxing places! 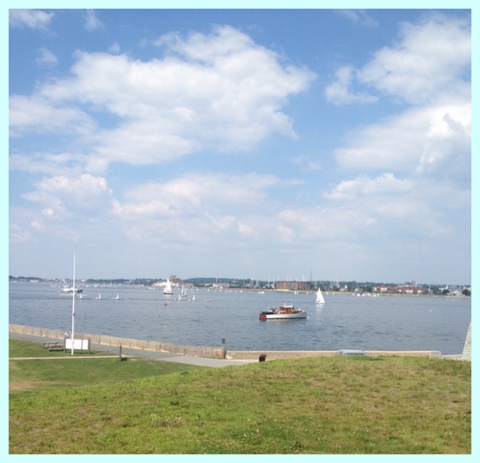 From our suburban home in Connecticut, Newport, Rhode Island is not that far away for an away-for-the-day trip. Located on the Aquidneck Island in the Narragansett Bay, Newport is one of the most picturesque places I’ve seen in New England.  We like to exit the highway when we get to Rhode Island, and drive to Newport through the backroads.  I love seeing the little farms and cute shops that dot the way. (We’ve seen some “Glamper-camps”, too…for future reference.  My hubby and I have shared that dream since we first got married, and being in the farmgirl sisterhood has only fueled that dream!)

No matter how many times we drive up to Newport, we always get excited driving across the huge Newport bridge over the water. 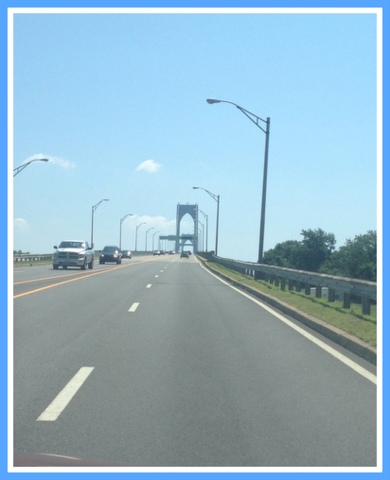 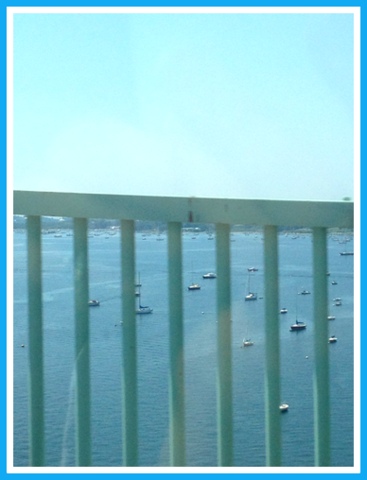 The view of one side from the top of the Newport Bridge. 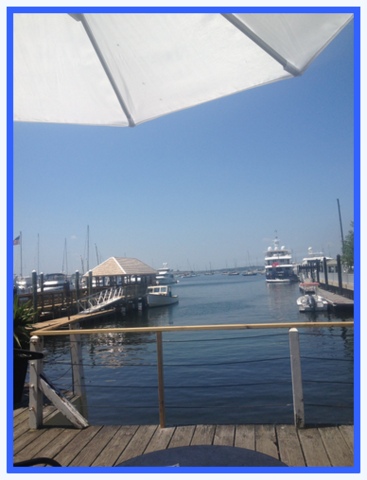 A relaxing view…lunch by the water

Strolling around the main square of the seaport, there’s so much to experience. There’s lots of shops, little two-person motorcars to rent, and sailboats to take sailing out in the harbor. 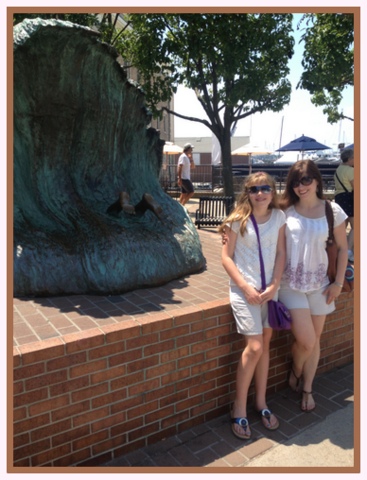 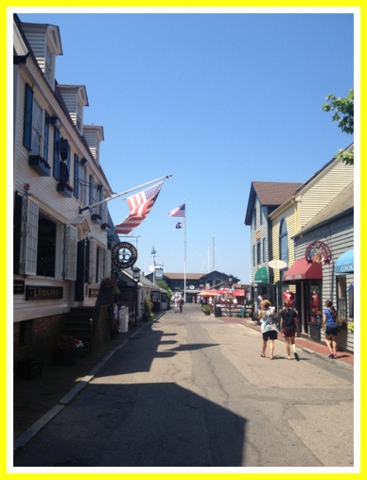 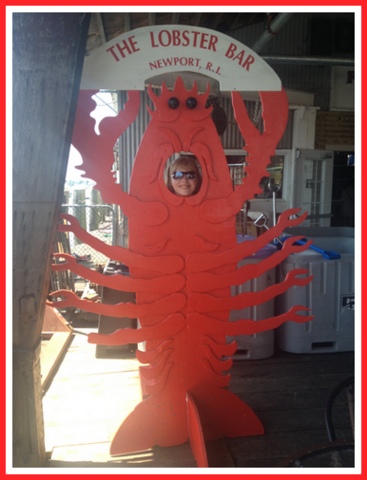 The intense heat of the day made my daughter a bit “crabby”…yes, I know, it’s a lobster, but I couldn’t resist.

The city of Newport is also famous for its mansions, built by the super-wealthy of American society during the Gilded Age. 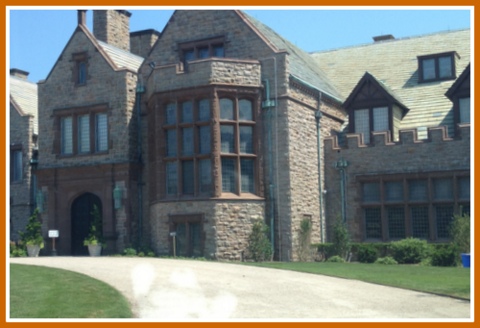 Vanderbilts, Astors, and other elite families built massive “summer homes” by the sea, many of which are now turned into museums open for touring.  Some are maintained by the Newport Mansion Preservation Society (http://www.newportmansions.org/).  Presidents Eisenhower and Kennedy also loved to stay in Newport.  On this particular trip, we decided to visit another historical site in Newport, national landmark Fort Adams. 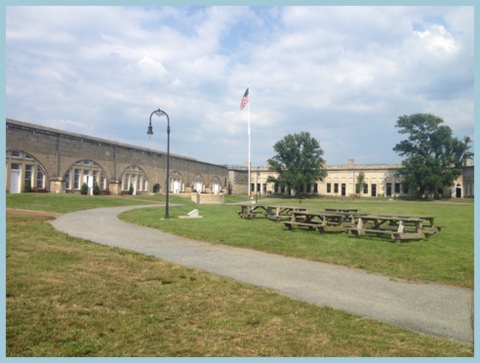 The original fort at the site was built in 1799, and troops were stationed there during the War of 1812. The currently standing fort was started in 1824 and completed in 1857.  Fort Adams is an impressive 871,200 square feet structure made of granite, shale, and brick, housed on 20 acres.  Designed by Simon Bernard, who once served under Napolean, the fortress is giant, and was engineered to be resistant to invasion from all fronts: by air, by sea, by land, even underground. If you visit, I highly recommend a guided tour, which gives you access to behind locked gates and underground tunnels. 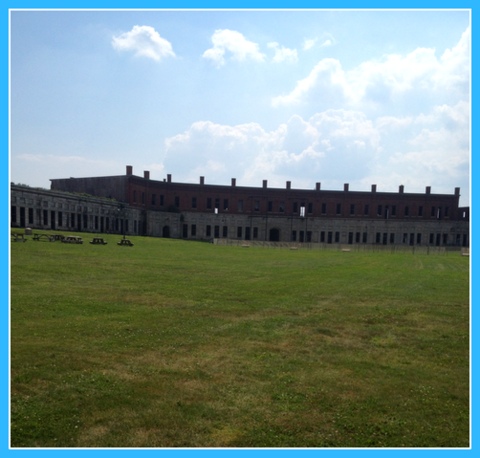 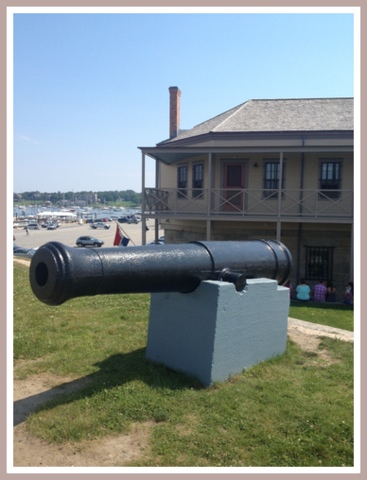 Ft. Adams actively housed troops until the fifties.  During that time, five major wars occurred, including the Mexican-American War, the American Civil War, Spanish-American War, and both World Wars.  However, a shot was never fired from Ft. Adams in anger. 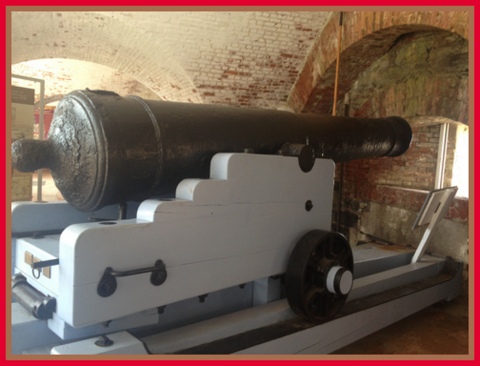 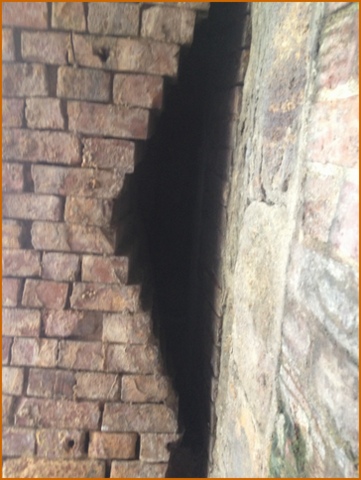 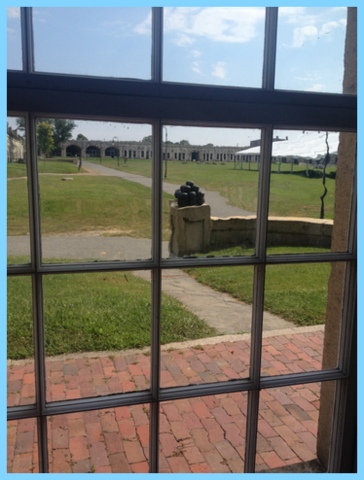 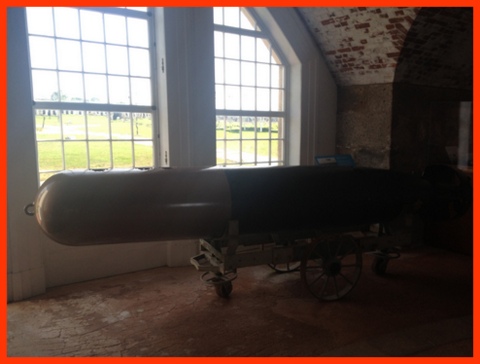 Walking through the massive structure, one realizes how brilliant the design is.  No enemy could penetrate the fort without being detected and surrounded.  Our tour guide took us up to the top portion, via very old, very steep stairs. 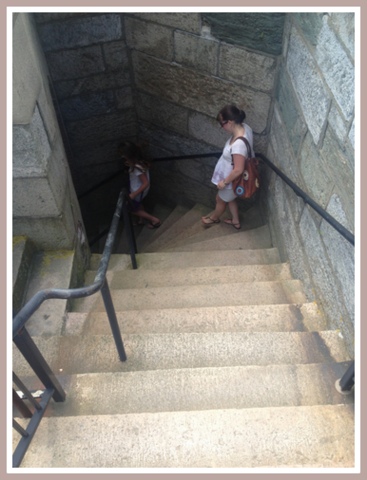 The stairwell was designed to let water drain down, to keep ice from forming on the steps.  Imagine being a colonial soldier, carrying a cannonball up that stairwell, on a frosty, snowy New England day!  Imagine how difficult such a massive structure as the fort itself was to build back in the 1800’s, in the heat or extreme cold, without modern tools! It makes me pause and think about what difficulties our forefathers endured.  On top of the fort, while scenic and beautiful, on a hot day it was sizzling! 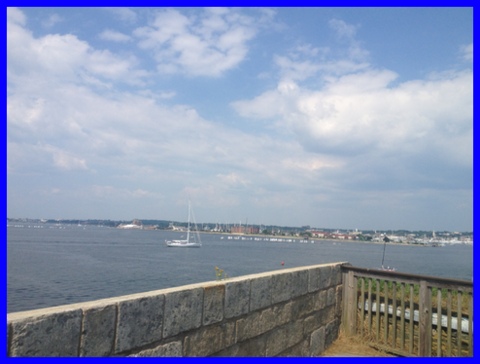 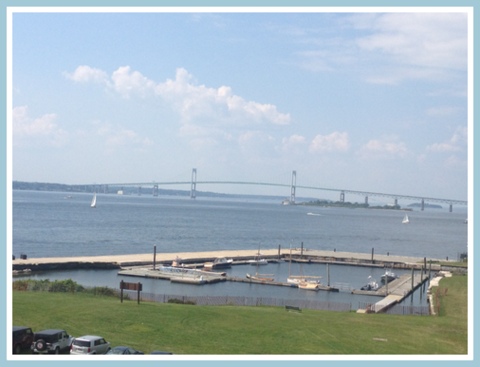 The view of Newport Bridge from Ft. Adams

Inside the old officer’s quarters the years of decay are evident, with crumbling plaster (the fort was left many years before becoming a tourist site or declared a National Landmark). One can still see the ornate moldings and rosettes that decorated the rooms. 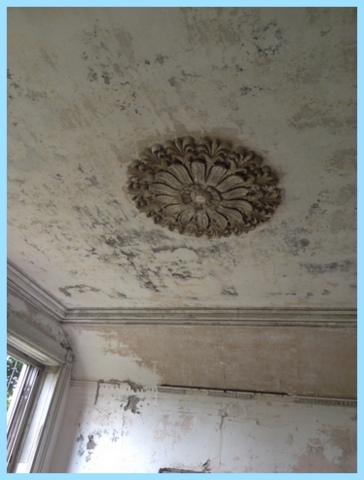 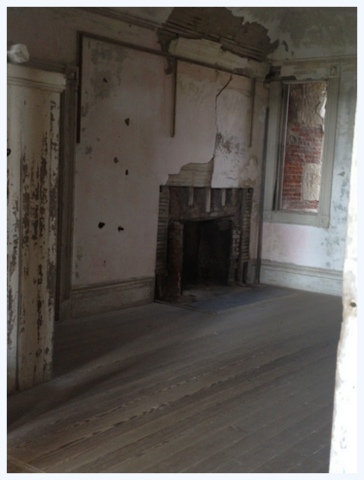 While seeing the old cannons and hearing so much about our nation’s history was interesting, my favorite part of the tour had to be the underground listening tunnels, designed to keep enemies from tunneling under the walls to breach the fortress. These long tunnels were made of brick, and some had very low ceilings.  My daughter and I kept looking back to make sure my very tall husband still had his head!  Some say the fort, especially the tunnels, are haunted.  I don’t know about that, but they were a little spooky! 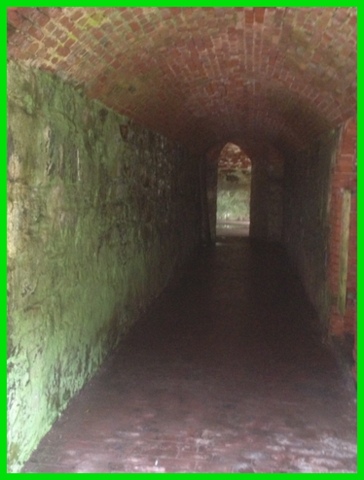 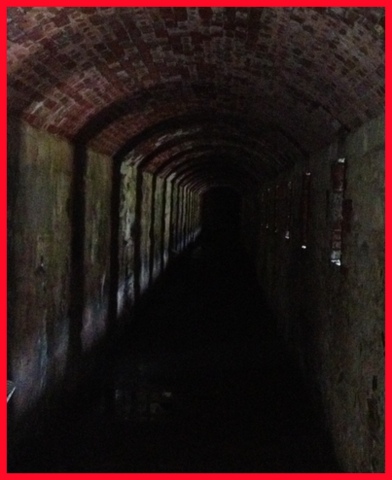 We ended our day in jail…the Fort Adams jail cells constructed in 1867. 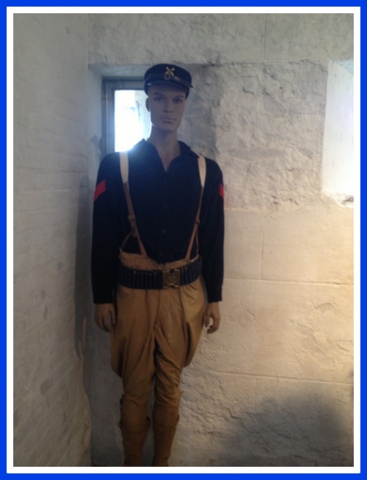 This fellow stands inside one of the cells in the Ft. Adams jail. 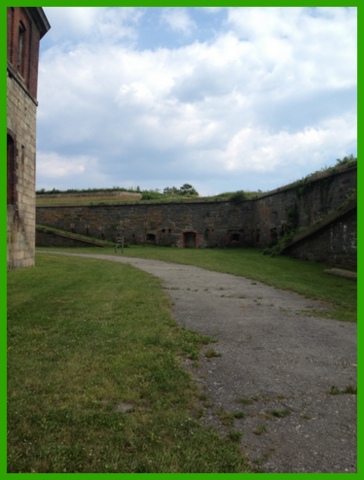 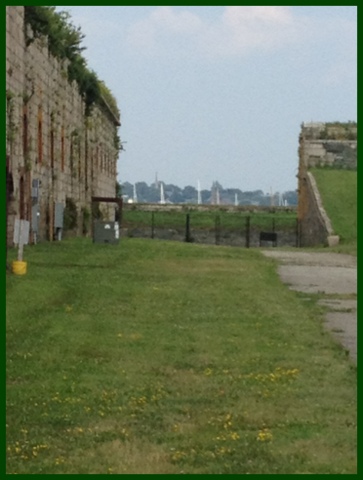 Beauty and decay mingled together… 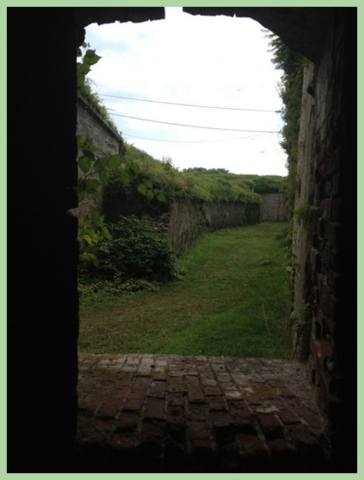 While preservation has been started, there are is a great deal of decay that can be seen.  It makes me sad that parts of our American history have crumbled, but I am glad to see when places such as Fort Adams are placed on the historic registry.  There are so many interesting places to visit with historic significance, and by visiting them, we help to preserve our nation’s history.

Hope you enjoyed our little “road trip”!  What historic places have you visited in recent years?  I’d love to hear about them. Do you agree that museums and tourist sites are important parts of American history?  Leave your thoughts in the comments section…