Posted on May 9, 2012 by Suburban Farmgirl Nicole Christensen

A while back, my daughter got a bee in her bonnet that she wanted to go fishin’ with her grandpa in Texas.  I’m not sure from where the idea came, since she’d never been fishing, but once an idea gets in her head, it’s stuck! So on our Spring Break Texas trip, Papa Charlie was determined his granddaughter would get that dream!  Since his pond water level was so low and has only minnows and baby catfish, he called his friends from the neighboring ranch to see if we could fish at their lake.  They graciously said yes.  Head back to Texas with me, and meet the Hogans, a most inspiring couple, doing what they can to create a retreat for wild birds almost lost to the native Texas hill country. 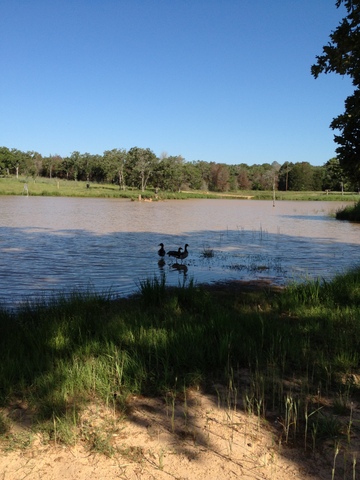 Barry and Liz Hogan live on and manage their 430-acre family ranch next to my dad’s property. Driving through their gate, there’s paths branching in various directions.  The property is  breathtaking!   I first met Liz, who greeted us with her warm, beautiful smile, pointing us in the right direction to the lake we’d fish in. What a sight!   Surrounded by shady trees, a gentle breeze was blowing over the water.  A pair of guinea hens were crossing the road.  Butterflies of all colors and shapes were seen on wildflowers, and ducks and geese were swimming or congregating on shore, having migrated to this little piece o’ Heaven.  There were mallards, wood ducks, and  black-bellied whistlers, a breed of duck I’d never seen. Ranging as far south as Mexico and South America, they aren’t as colorful as a mallard, but have long, pink legs, feet, and bills, and “whistle” as oppose to quack. This duck breed also prefers to nest and perch in trees.  In the water, Barry has built little “islands” with nesting boxes.  Liz explained that the water fowl often lay their eggs next to shore, making them prey to predators such as snakes and raccoons.  By offering the birds nesting boxes, they’re encouraged to lay their eggs in a safer place. 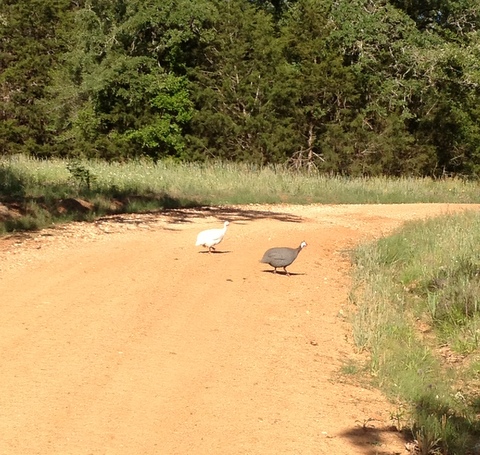 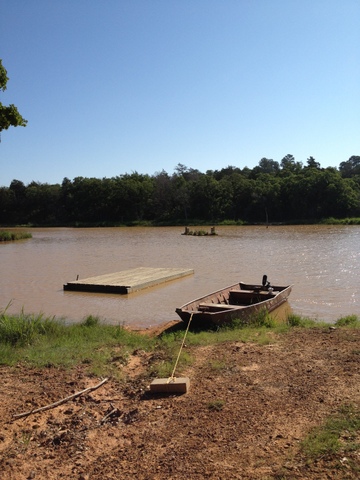 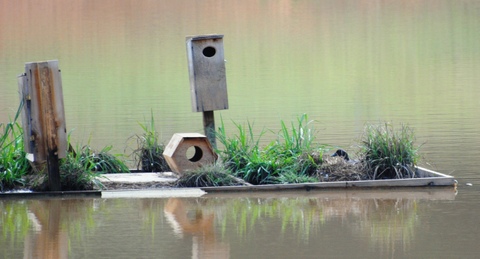 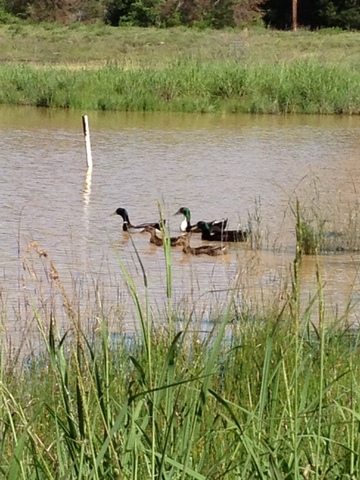 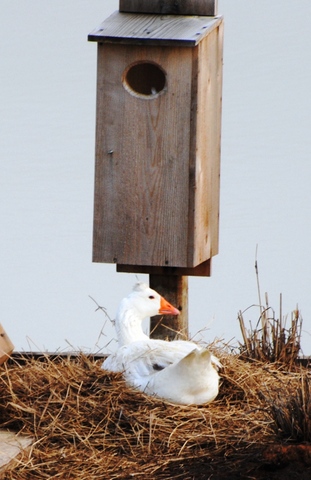 Goose on a nest. Photo courtesy of Barry Hogan

Papa Charlie showed Audrey how to bait a hook and cast her line, just as he taught me as a child.  She delighted in this new outdoor activity, and showed an enormous amount of patience in waiting to catch a fish.  While we had some nibbles, it  became clear the fish just weren’t biting, so Liz invited us for a cold glass of green tea, a tour of the garden, and a visit to see the other birds. 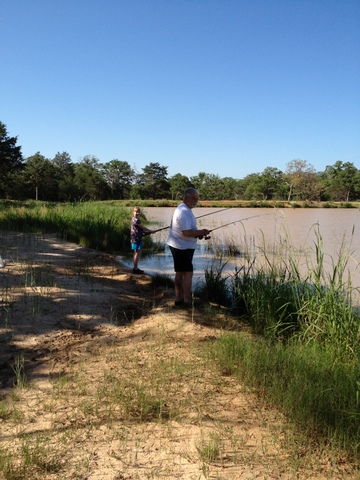 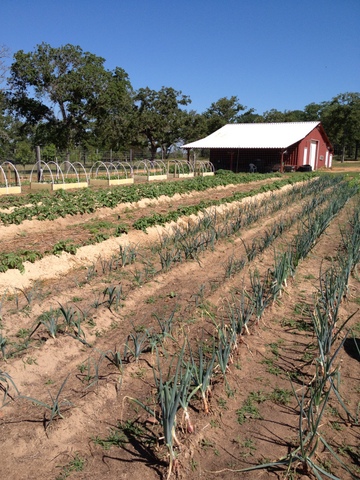 A view of the garden.

The first stop was the  garden, originally started by Barry’s father and mother, Jim and Willadeen Hogan. Barry and Liz have been gardening off and on for thirty years, and find gardening addictive.  This is the third year they’ve done “serious” gardening, and  my jaw dropped as we approached their amazing vegetable garden! Much of their herbs and vegetables  are grown in raised beds made from long-lasting, inexpensive Hardie board – one sheet making one raised bed.   Flexible PVC pipe is stretched over and attached at each side, anchored by rebar, allowing plastic sheeting early in the season to cover like a cold frame; later in the season  netting is used for shade and protection from birds and critters.  Three wooden stakes are used at each end of the box to run tie-lines, and each box has its own watering system. 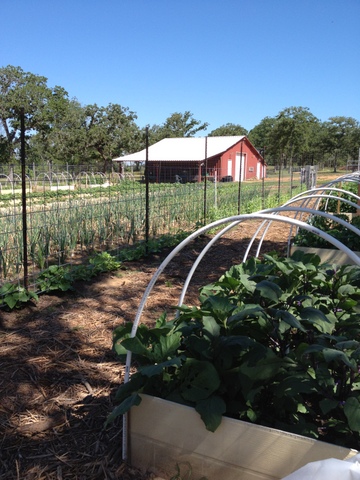 One piece of Hardie board cut into four pieces create the 4×8 raised beds housing everything from herbs, to lettuce, to tomatoes. 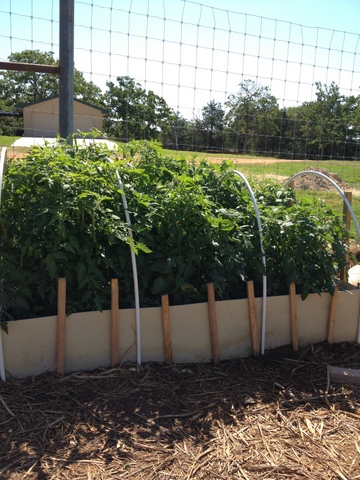 In another area of the garden, corn, beans, and squash are grown together on the same mounds, as Native Americans grew them. Known as the “Three Sisters”, this gardening method maximizes yield in a minimal amount of space.  The corn stalks act as stakes, the beans provide nitrogen, and squash vines covering the ground below aid in weed control. 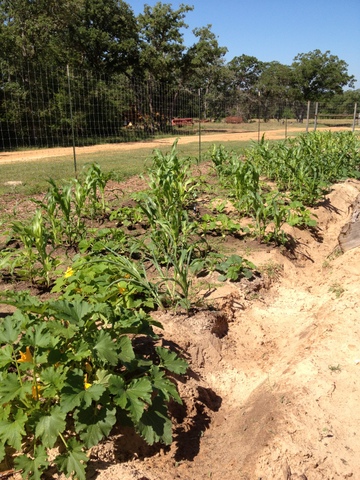 Liz shared some tasty radishes with us, ready for harvesting.  She says whatever harvest they can’t eat or share with friends will be shared with a local food bank. After marveling at the garden, we moved on to the birds. 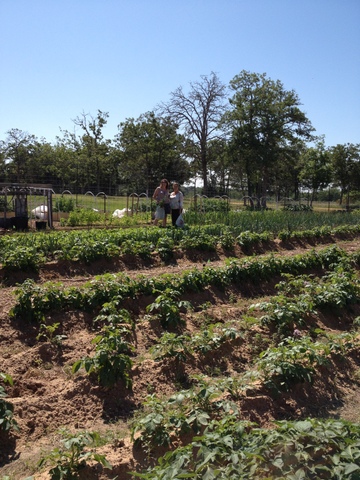 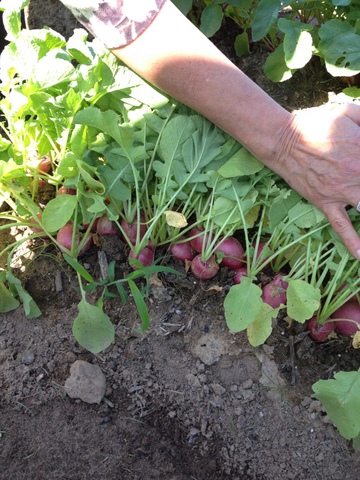 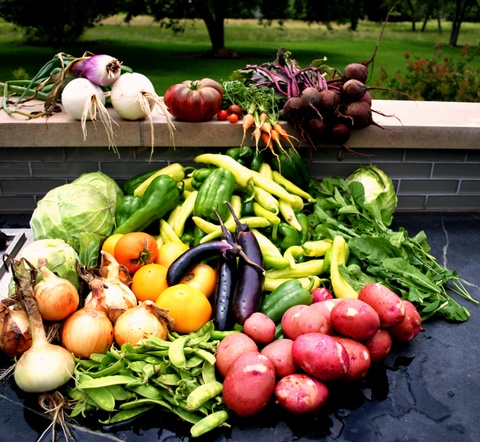 This week, Barry shared this photo with me of a recent day’s harvest…doesn’t your mouth just water?

Texas used to be known for its abundance of  quail. Unfortunately, there’s been a sharp decline in these and other grassland bird populations since the early eighties, to the point that many thought they might become extinct. Barry Hogan retired three years ago as CEO of a company recycling hazardous waste, separating out petroleum for reuse to produce water and clean solids. It was his father who first became interested in birds, and started with an incubator.  Father and son shared a dream to add to the property and help wild birds.  Over the years, the Hogans added property to its current size and constructed an eight-foot game fence around the perimeter. In the last three years since retiring, Barry’s actively been trying to increase the populations of Texas bobwhite quail and other grassland birds. 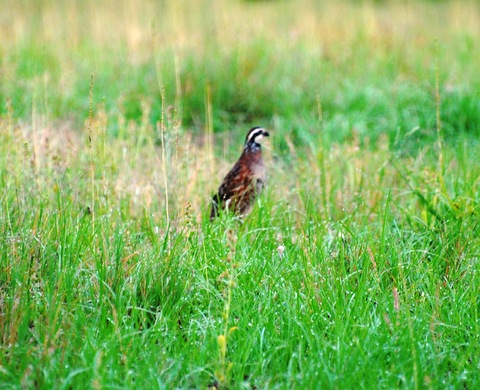 A grown quail, previously released, enjoying the Texas sun at the Hogans’ ranch.

To do this, Barry starts with fifty hens of each species of bird, and gets an average of fifty eggs a day.  Right now, he’s raising bobwhite quail, pheasants, chukars, and blue-scale quail. (There’s also some turkey and chickens.  Apparently, one of the hatchery companies uses baby chickens as live “packing” for other breeds, so the Hogans have happily added chickens to the mix). 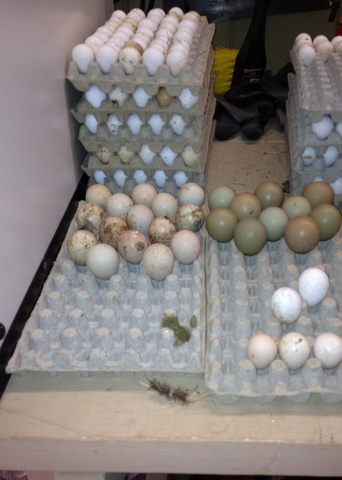 Once gathered, the chicken eggs go to the kitchen, and the wild game eggs go to the incubators in the hatchery.  The incubators roll the eggs from side to to side, just as mama birds do in nature.  From the incubators, the hatchlings next go to the “brooders”, then into larger structures, like a “bird nursery”, until finally they’re ready to be on their own and are released. Barry’s been experimenting with ways to release the birds to maximize survival. Neighbors report seeing quail since the Hogans have actively been releasing them, so the population’s been positively affected;  however, since the birds “range away”,  Barry feels it’s hard to tell just how much the population is coming up. (When we visited the ranch of Roger Newton, we spotted a pheasant, produced from their efforts). 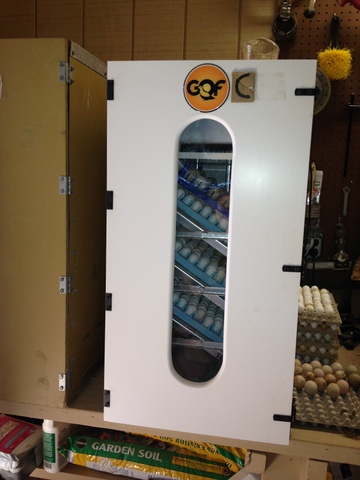 The incubator “rolls” the eggs gently.

It’s difficult for quail to flourish as they once did.  When I asked Barry why the population had dwindled, I guessed fire ants.  While that can be a factor, Barry says the main factor for decline is the same reason other wildlife populations have declined: their natural habitat has changed the last hundred years.  While Texas hill country was once grass prairies with trees surrounding creeks and ravines,  much is now wooded and brushy or planted in coastal Bermuda grass for cattle operations.  Less native tall grasses and forbs equal less quail: they need grass seeds to eat, and tall grasses to hide under from predators. 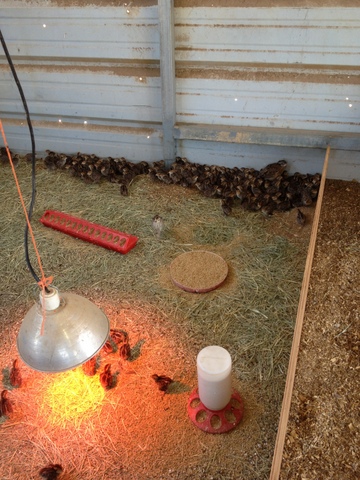 Hatched baby quail in one of the “nurseries”. 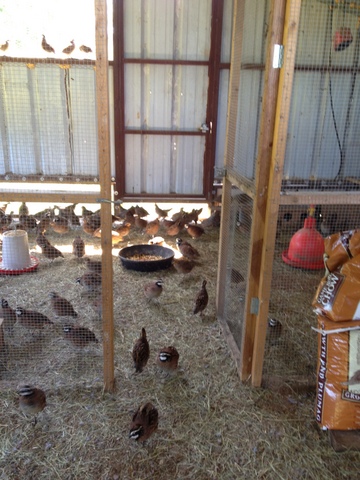 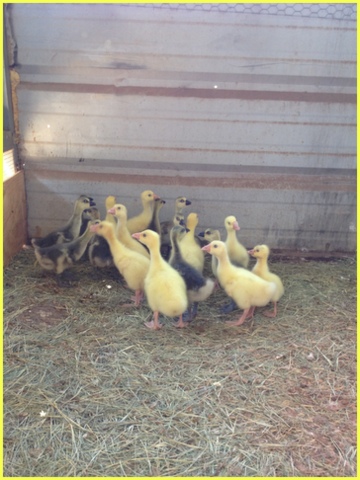 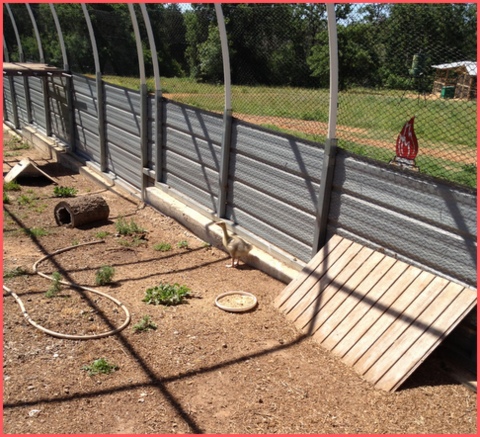 “Gonzo” the gosling, who thinks he is a quail.  Hiding behind the piece in the right corner are several baby quail, who “Gonzo” babysits. 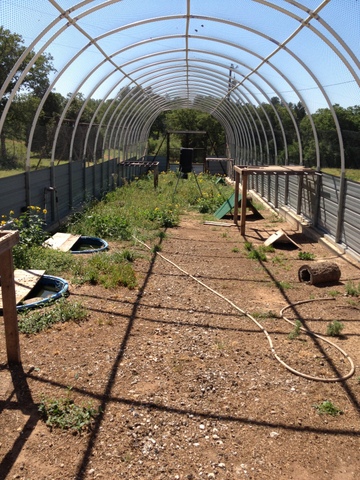 This is the “last step” for the quail before being released.  The Hogans have added the grassy areas to aid the birds in survival in the wild. 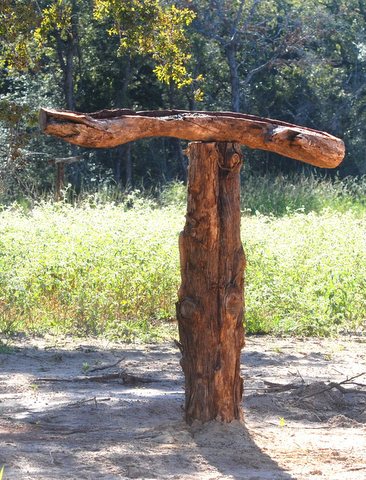 These very large bird feeders are located throughout the property; the posts are Eastern Juniper cedar trees growing on the property, and the feeding trays are from reclaimed mesquite. 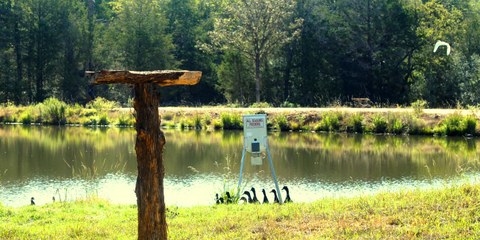 The lake we fished at, depicting another bird feeder.  Photo courtesy Barry Hogan. 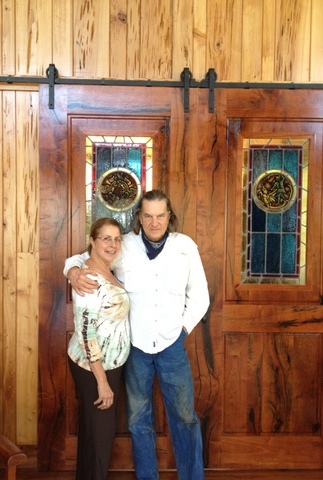 Barry and Liz Hogan inside their ranch home.  Re-using and re-purposing natural materials, the Hogans remodeled the home in 2010.  In this picture, the windows in the doors are from a church in England and depict St. Luke and St. George, from their original home in the 1970’s.  The doors are mesquite wood, which the Hogans  used throughout the house for floors, counters and more. The 300-year old mesquite sat unused in a neighbor’s barn for 30 years,  gathered from a car factory construction.  The breathtaking paneling is pecky cypress wood, reclaimed from a demolition of a Houston cafeteria in the 1960’s.

Barry and Liz are trying to bring back swaths of the native habitat by creating trails with native grasses and forbs that quail would eat, free from pesticides and herbicides. A recent visit from a biologist confirmed they’re doing a great job of recreating the prairie environment that was once rural Texas. The Hogans also strive for a self-sufficient property with gardens, fish, poultry and meat. (There are also one-hundred white tail deer calling the ranch home). 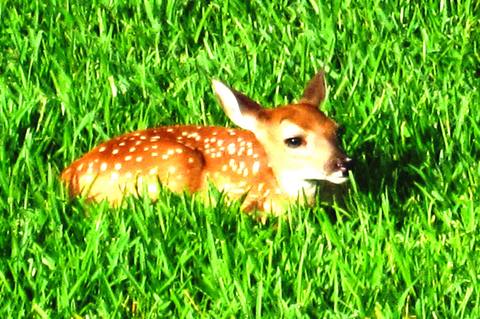 Barry and Liz’s passion for nature is inspiring. Their ultimate dream is to build a self-sustaining nature retreat where families can come and share in the harvest. It’s a beautiful dream… and it looks like they’re well on their way.