Living in Connecticut, I don’t  see relatives as often as I’d like. For my daughter’s Spring Break, my hubby suggested she and I spend a week with my family. Take a “Farmgirl” trip with me as we head to the Great State of Texas! 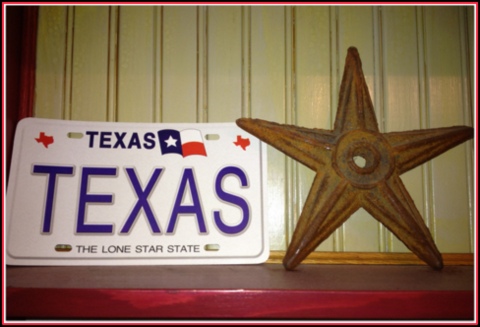 I’ve lived longer on the East Coast than in Texas, but I’ll consider myself a Texan ‘til the day I die.  It’s not that I don’t love Connecticut (and New York, too), but there’s something about Texas. Dan Rather put it right in an interview when he said he wasn’t “from” Texas, but “of” Texas.  It stays in your blood.  I’ve been fortunate to see much of the world, but there’s nothing as great as headin’ “home”.

My darlin’ husband drove us at the crack of dawn to Newark, New Jersey, for our flight.  We arrived in Houston around lunch, to see my dad, Charlie, and his wife, Karen. The first thing they did was take us for bar-b-que!  Now, there’s NOTHIN’  like TEXAS bar-b-que.  My favorite is a chopped  beef sandwich smothered in sauce, with a side of potato salad and a trough of unsweetened iced tea!  Is your mouth watering?  It should be! Texas smoked brisket is heavenly. After lunch, the four of us and ‘the boys” (dad’s two rat terriers) headed to the “Farm”. 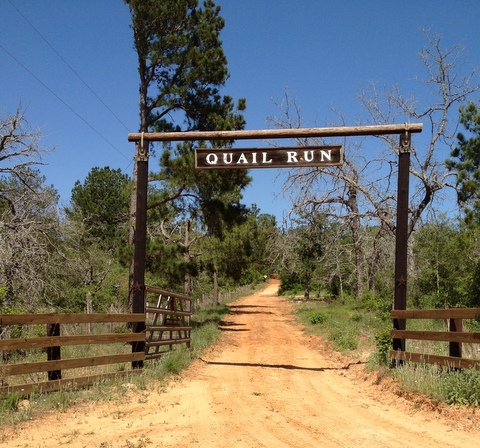 The “Farm”, officially named “Quail Run Ranch” is located in the breathtaking Texas hill country.  Dad purchased the ranch when I was a baby, and I spent most weekends and holidays there ‘til my teens.  It’s country… with woods, wildlife, and quaint dirt roads – the most peaceful place I’ve ever been.  I’ve only gotten to go back a few times.  Last time, we didn’t go to the ranch because of heavy rains.  We were last there when Audrey was three;  too young to remember.  I hoped now she’d get to make memories to last a lifetime.  I was not disappointed. 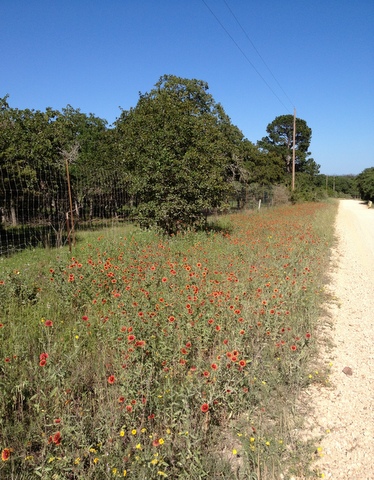 Once out of the city, the route is scattered with farms and ranches. Turning off the main highway, the dirt roads are lovely, sprinkled with Texas wildflowers.  Too late for the bluebonnets, we  saw wildflower patches of Indian paintbrush, black-eyed Susan, and  wild sunflowers. 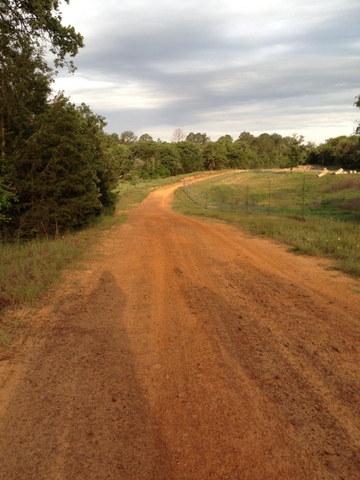 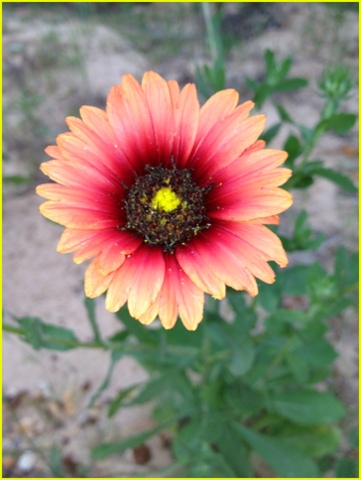 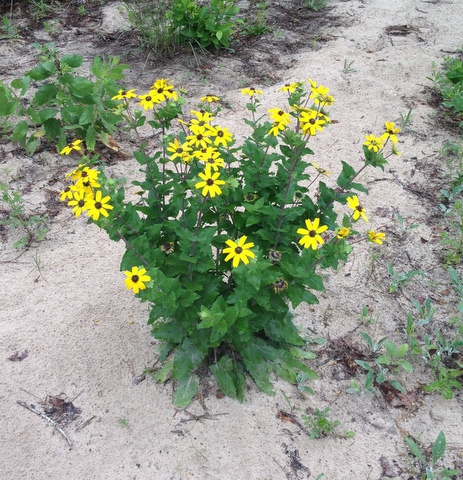 I admit I sometimes struggle with my garden.  In the TX hill country, flowers like this bloom wild, with little water and sandy conditions.  Go figure! 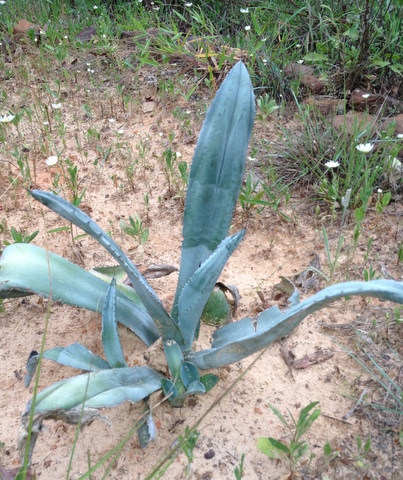 Dad named the ranch “Quail Run” because the property used to be home to wild Bobwhite Quail.  The house is the same house that my dad and brother built together when I was a baby.  It was special being able to say to my daughter, “This was my room when I was a kid.”  Some of the house has changed, but much is the same.  The claw-foot cast-iron stove looked smaller to me as an adult.  There’s the wooden rocking chair my mom rocked me in.  Heading outside, the little trees I climbed as a kid are now big “grandfathers”.  The baby pines we spent countless hours planting are now huge, well over thirty years old.  Right off the bat, in the back of the house we spotted a  wild bunny. 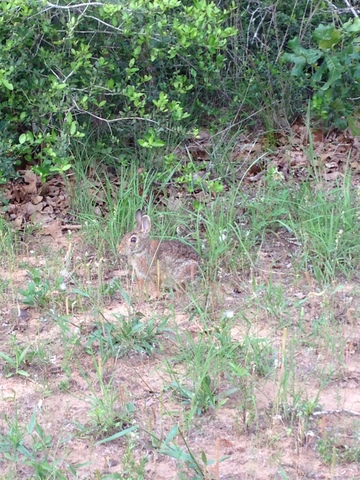 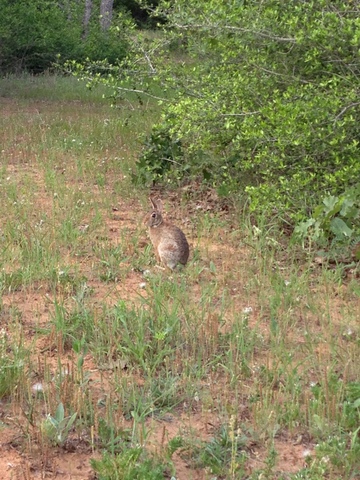 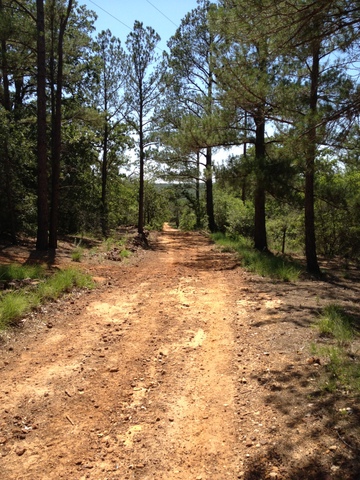 These are some of the trees I planted as a kid.

Next, we headed down to the “tank”. I spent good chunks of time there as a child, fishing for catfish or paddling around in a canoe. Due to the drought Texas suffered recently, the water level is low. Audrey delighted in feeding the fish with Papa Charlie. 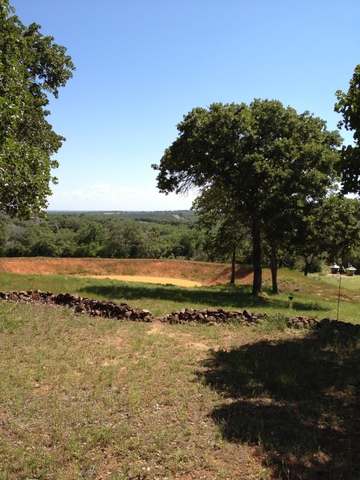 The water level is low, but that’s all the Texas drought caused at Quail Run.  Thankfully, the ranch was not affected by the horrific wildfires that ravaged much of the surrounding area last year. 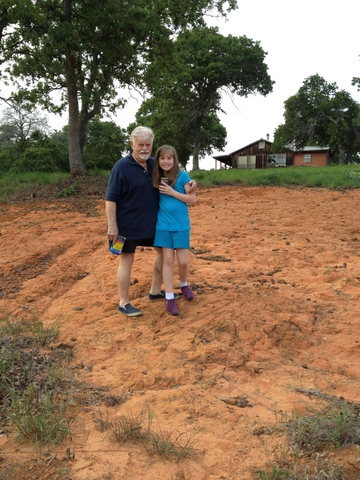 It was a short trip there, just two days, but we packed in as much fun as possible!  We visited neighbors, Jackie and Tom Knight, III, whose grandparents I used to visit as a child.  Jackie’s a true “Farmgirl” – very creative!  Karen says she gets much inspiration from Jackie’s cooking and gardening.   While we were there, she showed us one of her latest projects, re-purposing wood from downed trees into wind chimes.   We also visited with another ranch owner, Roger.  His sweet dachshund, Daffy, was so loveable, we warned him he’d need to check our luggage for her before we left!  He helped Dad clear some dead trees with his front-loader.  Good neighbors and great friends!  We also had a great time visiting neighbors at the next ranch over, the Hogans. Audrey’s had a dream of goin’ fishin’ with her grandpa, and they graciously invited us to their lake to fish. (I’ll introduce you more to this neat couple next  blog…) 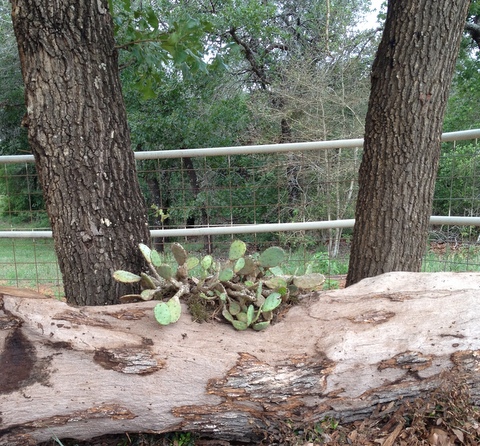 Jackie re-purposed a fallen tree as a planter at her front gate for wild cactus. 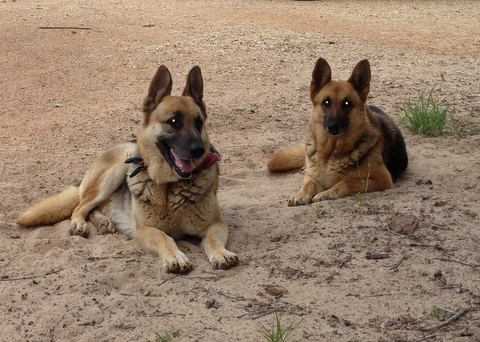 An animal lover as well, Jackie rescued these two beauties, who are “Keepers of the Gate”. 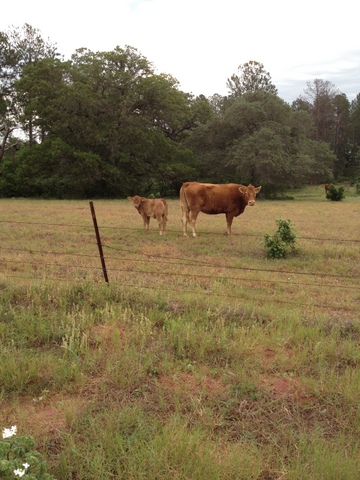 Taking an early morning walk with Jackie, we spied some of her cattle.

It was surreal seeing my daughter run free as a bird, like I did as a child. We marveled at butterflies, caterpillars, cactus, flowers, and birds, (always watching for snakes and blister bushes). Surprisingly, we didn’t see any wild boar, a nuisance in Texas, nor did I see much of the great menace, fire ants.  Audrey was able to do things she doesn’t get to do in the suburbs, like ride on her Papa’s John Deere tractor. 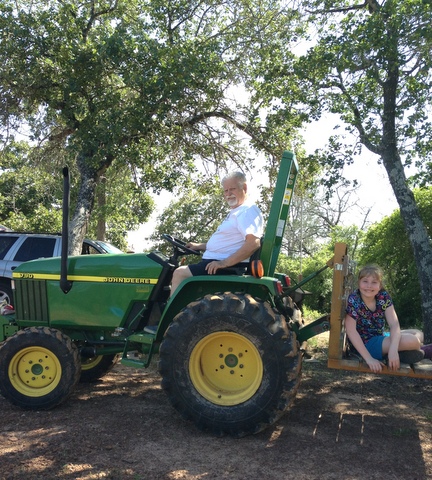 Papa and granddaughter pose on the tractor. 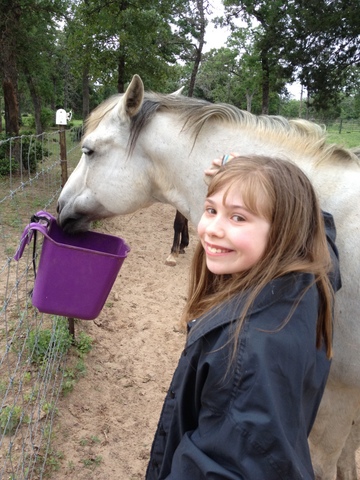 Grooming one of Jackie’s horses made her day! 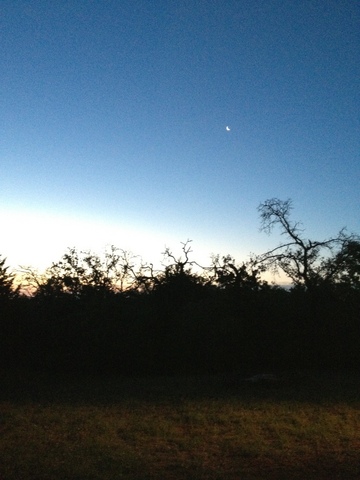 Dawn: we woke up to the sound of a lone Whippoorwill. 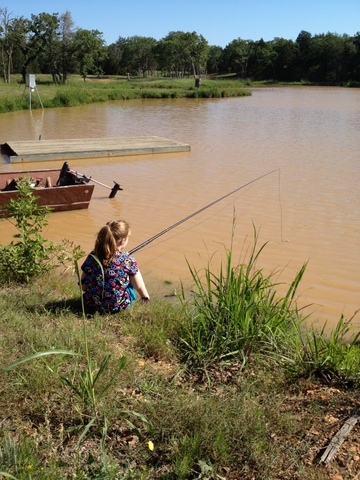 Fishing at the Hogan Ranch. 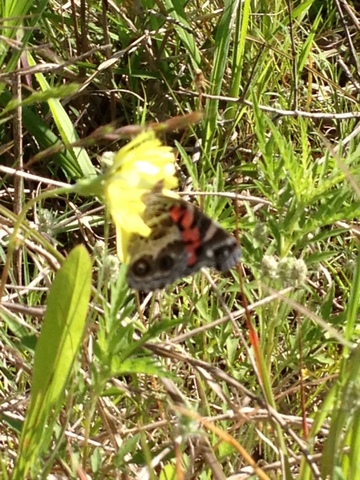 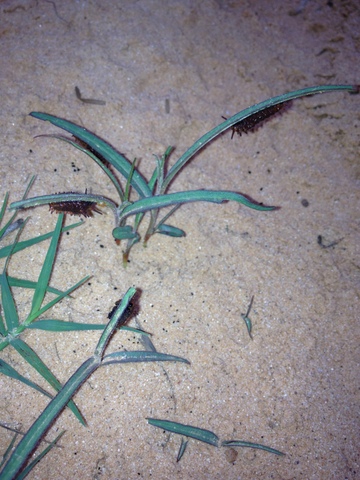 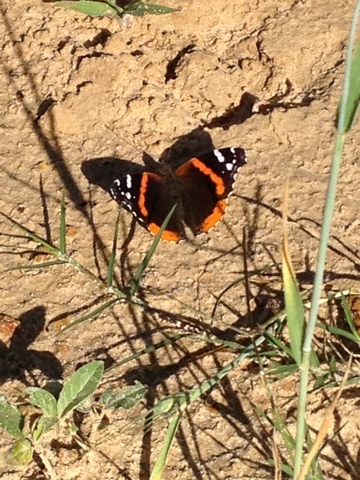 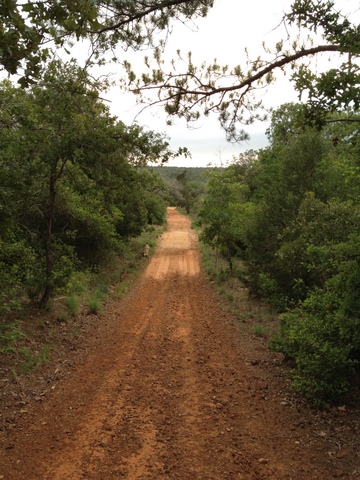 The earth there is rocky and sandy, a mix of white sand and red clay. Much of the acreage is wooded and brushy.  The ranch is in Caldwell County, where the “Battle of Plum Creek”, (between the Texans and Tonkawa against the Comanche), took place in 1840, near Lockhart, Texas.  Dad told Audrey of some of the rich Texas history.  She was fascinated  that Native Americans once roamed the area.  As a child, I remember finding all sorts of arrowheads in the dirt, among the rock. Audrey’s heart sunk when Papa Charlie told her no arrowheads were found in over twenty years.  We were amazed when Audrey did discover one with her eagle eyes – a shocking, awesome surprise! 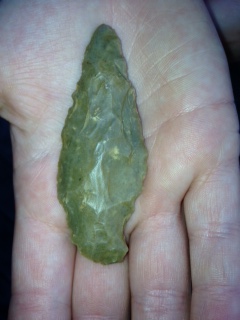 While exploring, we also found a rusty, metal piece.  Dad speculated it’s some kind of antique piece off of a frontier wagon.  Crudely made, hand-forged, and very heavy, who knows how long it sat in the ground, finally unearthed after rain. 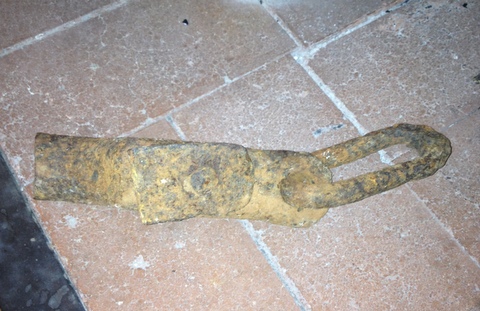 When it was time to leave, it seemed we’d been there longer than two days. Heading back to Houston, the rest of the trip was spent enjoying the warm weather.  So much more is blooming than up North, and Dad and Karen’s tomatoes and carrots are already grown.  There’s fruit on the lemon and lime trees, too. 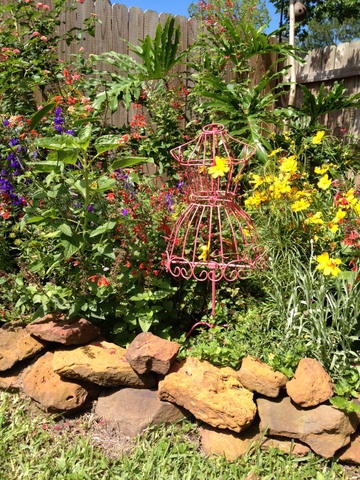 Dad and Karen’s cutting garden at their suburban Houston home.  The rocks came from the ranch.  Dad built these rock fences all over the ranch when I was young, and inspired me to do the same around my flowerbeds in CT. 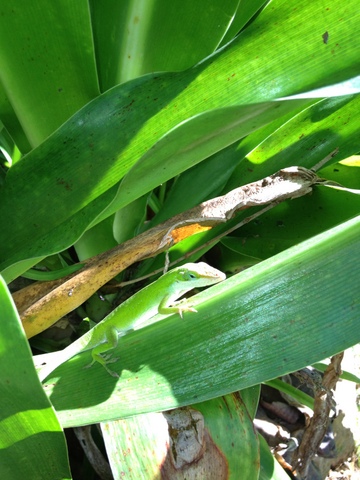 Can you spy the little critter hiding in this photo?

We ended our trip with a few days’ visit with my brother.  Russell and his wife, Ruvidia, treated us to a Tex-Mex lunch and a dinner of Texas-sized Chicken Fried Steaks, served on a platter not a plate. (Heaven’s filled with fried food, I just know it).  Like when we were kids, my brother and I stayed up late playing dominoes, with a neck-to-neck match.   Victory was short-lived: my nine year old beat me the next day by eighty points – twice.  On the last day Russell smoked melt-in-your-mouth chicken on the barbeque.

The week flew by, and we headed back to New England. Back home, there’s much to do. Are you far from family?  What do you miss most? 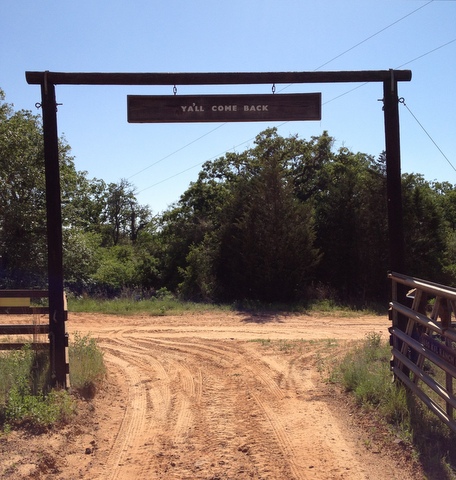 Here’s some great Texas recipes to make at your neck o’ the woods.

Mix everything together in a bowl. If it’s dry, add more mayo, sour, a tad more sugar.

*Can substitute 1 can tomatoes  drained plus 1 can green chiles drained.