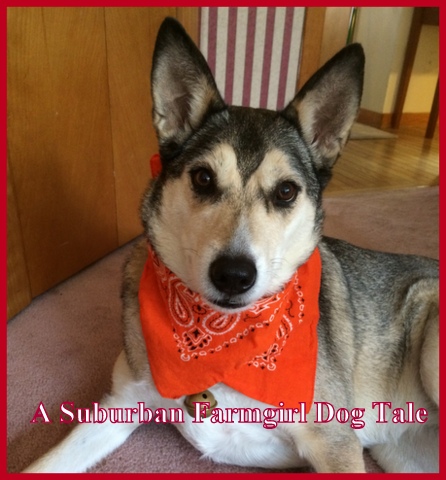 A dog’s love is unconditional. Always happy to see us, they don’t care about our outside, just what’s on the inside. Pets are “family”, and dogs are no exception. The holidays are a time of magic, love and giving. Dogs are our greatest teachers for that, with their selflessness and gift of pure love!

Last month marked my Suburban Farmgirl blogging anniversary. Having started in 2010, my first-ever blog was about Thanksgiving. Next was titled, “Our Other Child”, about Bonnie, our rescued “German-Shusky”, who forever changed our lives.

While all fur-babies are extra-special, sometimes, there’s one that’s different…an exceptional pup. That was our Bonnie. We adopted her from a shelter, where before we were her fur-ever family, she’d been first on a southern puppy mill farm, then adopted out here but inexplicably sent back (thankfully) to the shelter. Somewhere along the way, she’d been abused. One leg was always bowed. Our vet said it’d been previously broken and not set right. She was also deathly afraid of water, screaming uncontrollably if bathed. (We learned to bathe her away from a tub). Her past didn’t define her, and she grew to be a confident, happy girl. My husband first knew she was the dog for us from her online photo, with her goofy smile and giant pink ears.

She had us with those ears…

Six months old, by the time we adopted her, she’d been in a crate for eight weeks. We’d arrived early, just as shelter volunteers were taking her out before our meeting. As we pulled in the parking lot, she was bouncing like Tigger! I panicked a bit at sight of the fluffy ball of energy, but right at meeting, our hearts connected. That first car ride, she calmly sat, like she knew we were going “home”. At the house, she became elated after sniffing our daughter’s toys, excited she’d have a child to play with! When my daughter came off the bus that day, Bonnie and Audrey were forever bonded, best friends. 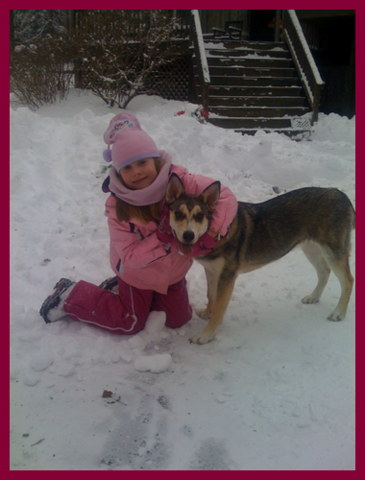 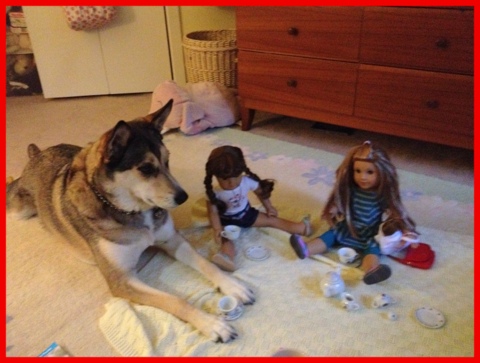 She always wanted to be with Audrey and her playmates.

Bonnie was like a fur-covered human. A vet once referred to her as a “genius”, a label he reluctantly used, but he said he’d never met a dog like her. An intense stare in your eyes “usually means aggression with dogs”, but with “Bon Bon”, it wasn’t. “She’s reading the humans around her”, the vet marveled. 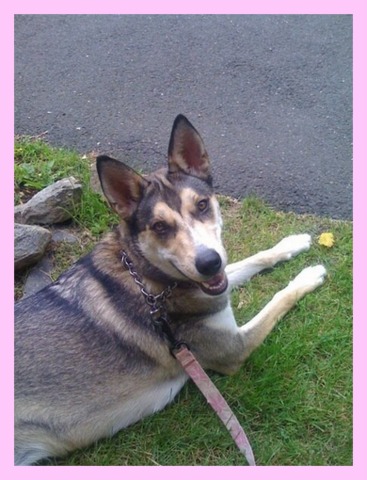 Bonnie could communicate! She quickly learned (without human intervention) to ring the bell on our door to go out, a skill I’d given up on with our other pups. Once, when my daughter ignored the ringing and I was out of earshot, she pulled the bell off the door, dropped it at my feet, and puddled the floor as if to say, “I rang it. Told ya I had to go out”. Another time, I told her we were going on a walk. Before we could leave, the phone rang. As I chatted, Bonnie became impatient. She went upstairs and opened my closet. All of my shoes were stacked in boxes. I heard rumbling. Soon, Bonnie came down the stairs, my walking shoes in her mouth. She’d gone through the boxes to find the right pair!

Bonnie could answer “yes” or “no” to questions “like do you want a cookie,” or “do you need to go out?” For “yes”, she’d slam her front paws downward and bark. For “no”, she literally shook her head.

Bonnie only knew love from us, but for a while we could tell she had nightmares. She’d come to us and whimper, as if to tell us about some awful ordeal. Eventually, the nightmares stopped. If we were gone for long periods of time, she’d be so gleeful at our return, leaping in the air and howling. She truly loved us with her whole heart. 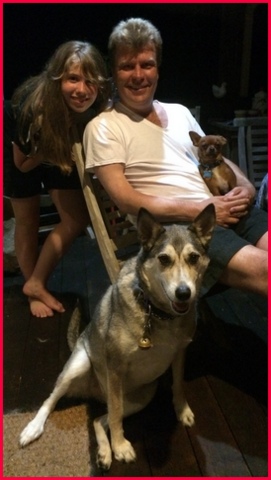 Together, we walked many miles. She adored snow and sledding with my daughter. Bonnie knew what holidays were. Her birthday was the day before mine, and she LOVED having the birthday song sung to her and opening presents. At Christmas, she knew exactly which stocking was hers. She was unbelievably smart. She could also be stubborn and mischievous, and never learned to walk on a leash without pulling us like a sled. Bonnie had so much personality! 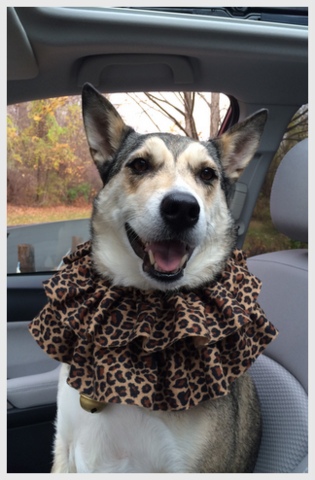 Unfortunately, this fall, Bonnie became sick with very aggressive cancer. She held on as long as she could. Our vet office did all they could, but eventually (and quickly), Bonnie couldn’t fight anymore. Two days before Thanksgiving, our last morning together, she mustered all her strength and climbed into my lap on the sofa. She knew we were going to say goodbye, and she wanted to make sure I was okay. Before leaving for our appointment with the vet, our other dogs snuggled with us, both licking Bonnie’s face. 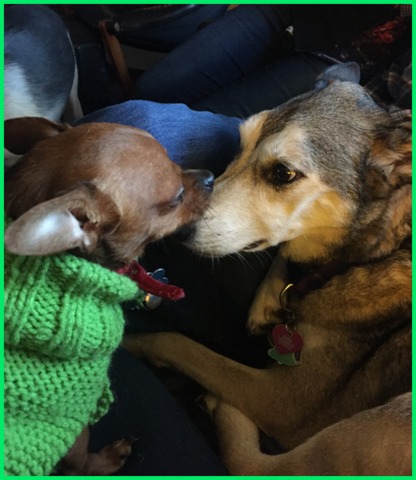 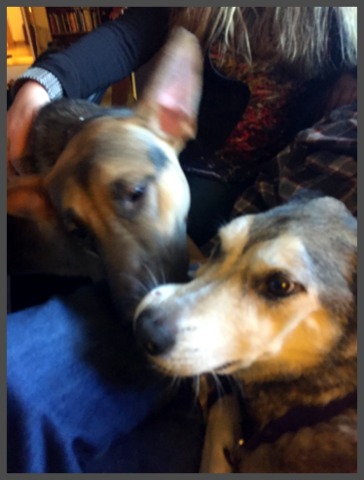 Putting a dog down is just awful, but our vet couldn’t have made it nicer, with a peaceful, cozy room with a fireplace and fluffy rug. When Bonnie’s heart stopped, mine felt like it shattered. I will always carry her in my heart. I can’t imagine Heaven without our beloved pets! 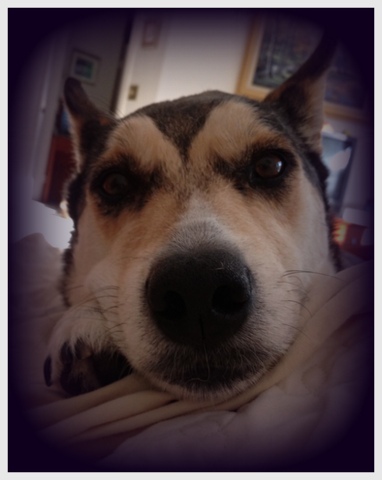 “Hi! I missed you!” What I hope I see at Heaven’s gate someday…

I love all my furbabies immensely, but my connection with Bonnie was super-special. She “got” me.  My husband would say she was my “other soul mate”, my constant companion. I never liked dogs in my bed, but quickly lost that battle. She knew not to jump on the bed until the “dog sheet” was on, and for eight years, she slept on my feet. I’d often wake up cramped, Bonnie grasping my legs with her paws. What I wouldn’t give for one more sleepless night! 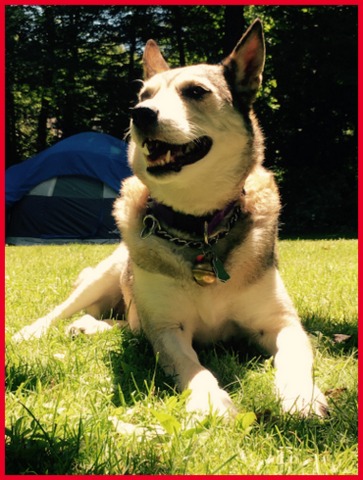 There’s a happy ending to this tale. A year ago at Christmas, we adopted a puppy, Scarlett. When we first brought Scarlett home, we feared Bonnie would be jealous, but the opposite happened. At first sight, she wagged her whole body in pure joy, as if to say, “You brought ME a puppy! You brought ME a puppy!” Bonnie adopted Scarlett as HER baby, constantly fretting over Scarlett. Bonnie was never happier. She was a great mom, and she raised a good baby. 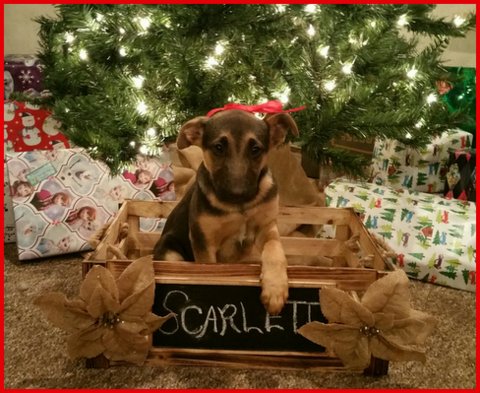 Our latest addition to the family, last Christmas. 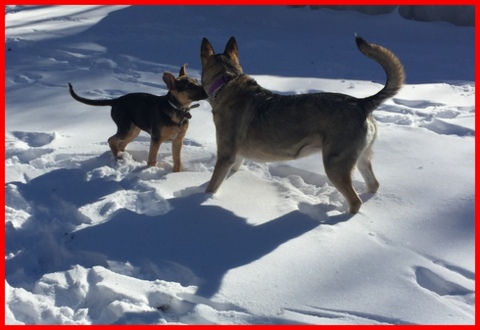 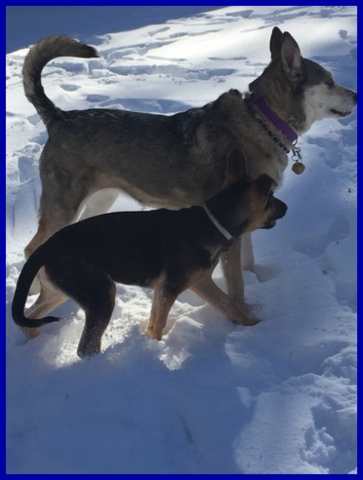 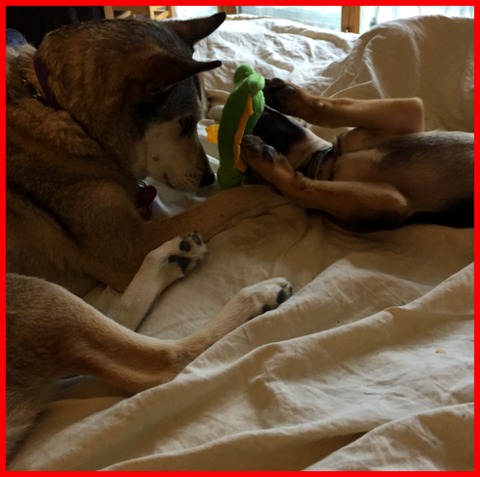 Scarlett’s now full grown, looking after little Pip, and acting as my shadow. She misses her dog mom, as do we, but she’s got us smiling and laughing with her adorable antics. She reminds me so much of Bonnie! 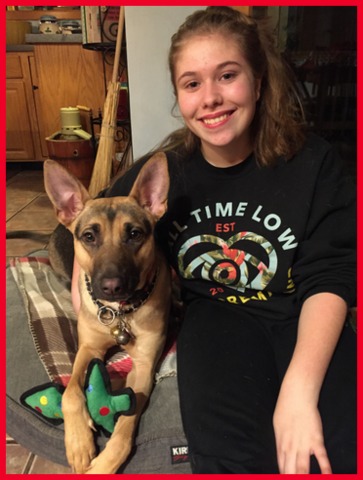 Scarlett and Audrey getting ready for Christmas!

We are so thankful for our little fur-girl. It’s Scarlett’s first Christmas with us, and we can’t wait to show her a great holiday!

Wishing you all the Happiest of Holidays!