The Princess and the Tea

I was little when Diana Spencer married Prince Charles, live on television. It was a record-breaking event, watched worldwide. Now Prince William is getting married, and there’s another beautiful princess-to-be walking down the aisle. Will it enlist the same magic in 2011, and why would a suburban American mom get so excited over a royal wedding a world away? 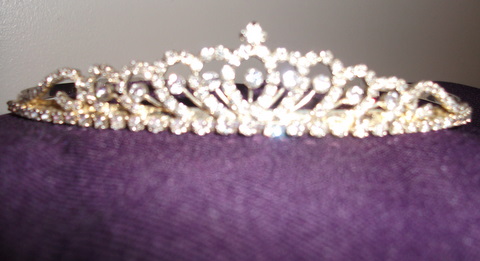 July 29th, 1981.  I remember it vividly.  I was nine, but my mom made that day special.  We got up before dawn to watch history!  Mom made hot tea.  Not just any tea, mind you, but “special” tea she ordered from England, to mark the occasion.  It arrived in a commemorative tin, a splurge for my stay-at-home mom then.  We stayed glued to the television. It was exciting, watching something you knew the whole world was doing at the same time. As the bride rode to the ceremony, my mom told me, “See, she’s going to be a real princess, and she’s marrying a real prince.  Fairy tales do come true!”

As a child, my favorite stories involved princesses, and the thought that royalty truly existed was mind-boggling.  When Princess Diana walked down the aisle in that dress, it was like time stopped…that dreamy, amazing dress!  I saw Diana’s clothes on display a few years ago. I stood in front of the wedding dress in awe, remembering every detail of the wedding I watched decades before. 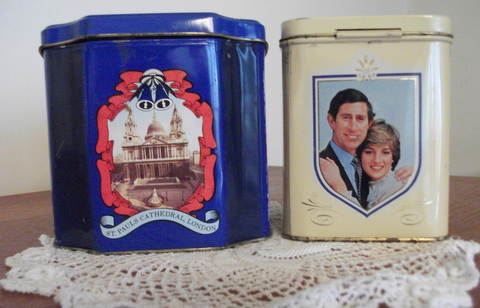 The tin on the right is the one from my childhood…the one on the left a friend found for me in an antiques shop.

Most of my childhood belongings disappeared but, somehow, I have my little tea tin.  Growing older, I watched Diana for inspiration in fashion, hair, and spirit.  The way she raised her children, and the way she treated people with such amazing grace and compassion still chokes me up.  When she died, there was a crack in the atmosphere! What a loss.  Most of today’s celebrities aren’t always worthy of the admiration they receive.  I love it when strong, beautiful women are known not just for the way they look and dress, but for what they do for others.  It’s inspiring. I think of Princess Diana, Audrey Hepburn, and Oprah Winfrey, to name a few.

Still, with Royalty, there’s that mystery about them. Maybe the fascination is because of fairy tales, though they’re changing: modern fairy tales have princesses who help themselves, and not just look to their fairy godmothers.  My daughter calls it  “Girl Power”.  I think as an American I’m  curious of royals because we just don’t have them.  My husband was born in Denmark.  Danes are fiercely proud of their royal family, but not so interested in their day-to-day lives.

I’ve actually met Danish Royalty. In the nineties, BC (before children), we attended charity events in New York City on a few occasions.  Twice, we got to meet Princess Benedicte and her husband.  The first time, there was a receiving line.  The second time was more informal, with the Princess mingling around the room.  I was introduced to an older gentleman, but with music in the room I did not hear who he was.  Chatting, I saw Princess Benedicte nearby. I asked him, “How does it work with the royal family, may I go up to her, or do I need to be introduced?” He chuckled and said, “Go on up to her, I’ve been doing that for years”.  It was later that I realized I’d been speaking to her husband, the Prince!  I think youth was on my side with that faux pas.  I’m still mortified!  At both events, she was gracious, kind, and regal.  I’ve also met the Princesses of Sweden, and of Greece.  Royals are flesh and blood, not superhuman, but people born or married into extremely extraordinary positions.

Nevertheless, this week, when my daughter’s third-grade biographical project was due and she picked Princess Diana, I felt a twinge of glee. We dressed her up in an old evening gown, with rhinestone jewelry and tiara. What struck me about my daughter (and made me proud), was her perception of Diana compared to my nine-year-old self. She was not as interested in Diana’s wardrobe, but of what she accomplished, such as being named Humanitarian of the Year in the USA, and pondering what, if any, effect it might have had in the world had Diana married Dodi Fayed.  (Perhaps some of the “magic and mystery” of “Royals” is lost on her, since she’s been to Denmark and toured some “real” castles).

Now Diana’s future daughter-in-law, Kate, will marry William.  I hope they have happiness, and follow in his mother’s footsteps, using their grand position to help others.  I’m looking forward to a happy diversion in the news. In Farmgirl fashion, I’ll bake scones and share hot tea with two other moms my age and our daughters.  Maybe some day our daughters will be watching another royal wedding and saying, “I remember that day with my mom…” 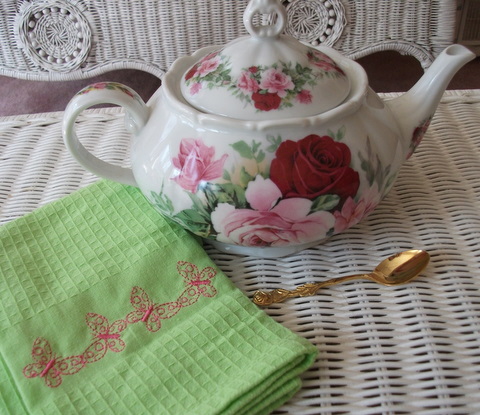