crav-ing (noun): a powerful desire for something; an intense, urgent, or abnormal desire or longing;

Once in awhile, we all want something so badly it is hard to get off of our minds. Sometimes, these come out of nowhere; other times they are fueled by seeing or smelling something that we just can’t forget. Sometimes, it feels like we need these items or we won’t be able to go on. Obviously, these cravings are generally not a part of our hierarchy of needs and we would survive just fine. However, our sanity might take a hit.

One of the most common questions I get asked as a pregnant woman is “do you have any crazy cravings?” Generally, the answer to that is, “Not really…” I crave ice cream and chocolate sometimes, but I think I always crave ice cream and chocolate. Sometimes I crave green things like kale and Brussels sprouts, but I sometimes crave green things when I’m not pregnant. So, while I don’t have any “crazy” food cravings, I am way more apt to give into my food cravings than I was before. I’m generally just a lot more insatiably hungry!

However, I’ve also been taking note of some of life’s cravings that are not food centered.

There are some common non-food cravings that people have–like those that crave affection or the spotlight. I am not lacking for the former or wanting of the latter. Lately, I’ve been craving a few things (both food and non-edible)…

The Farmer’s Almanac called for a late start to winter in Alaska, and it is proving to be true. We have had very few days below freezing, and we are already a week into November! It snowed once…in September. There is accessible snow high in the mountains, but not down here where we live and sleep, and–most importantly–wake up to the beautiful silence of fresh snow. I guess we got lucky with the late onset of frozen ground, as we just had an electric line placed in the ground for the yurt. If the ground had been frozen we might have been S.O.L. until May (or June…). I know many, many people in northern climes are perfectly happy without the white stuff, but I just love snow! I feel like it is a part of my identity, and it is missing at the moment. Perhaps it comes from being a winter baby…

Are those t-shirts I see? In November? In Alaska?

Mmm, mmm, mmm…Kalbi, kimchi, bibimbap, dokbegi bulgogi, gamja tang…MASHISOYO! (that roughly translates to “it is delicious!”). As I’ve entered my third trimester of pregnancy, this has been my only real craving. It will be satiated sometime in the near future! Luckily, there is a large Korean population in Anchorage and there are many Korean restaurants…mmmm, I will dream about the mashisoyo-ness until the meal comes.

I miss my family, plain and simple. It’s probably because the holidays are coming, this baby is coming, and my family would make it all seem complete. While writing this, I remembered that I was supposed to Skype with my brother and his family

(Sidenote: We just experienced our first earthquake in the yurt! Awesome! Sorry to stop mid sentence)

a few hours ago. Now it is almost midnight there. I guess it’s a bit late for a 6 and 3 year old. So, pregnancy brain has kept me from helping out one of my cravings. Ugh. I hope that next week I will be more on my game. My father will be visiting in December, so that will be a good taste of what I’m craving, too!

I will be graduating with a master’s in outdoor and environmental education in December (hence why my father is visiting). I am so ready for this milestone to be passed. But first I have to finish writing and defending my thesis…It is happening!

Moki helps me work on my thesis. What a good helper.

The yurt is progressing beautifully. Every week brings with it completed projects and a more homey atmosphere. Evan has created some amazing stairs up to the loft as well as the beginnings of our closet. I can’t wait to get our clothing into it and out of our living space! Next, we are looking at getting as close to “normal” utilities as our yurt will ever have. This is all reliant on electricity. We will have a refrigerator! and an oven of some sort! and an range of some sort! and more than one lamp! I am craving these things, but keeping the cravings at bay because I know they are coming very soon. For now, the near freezing temperatures work very well as a refrigerator, the woodstove is a fine cooking surface, and our one lamp works perfectly for our current situation.

The new and improved wall with wood rack, shelf ladder, and a mattress peaking over the loft (just delivered today!) 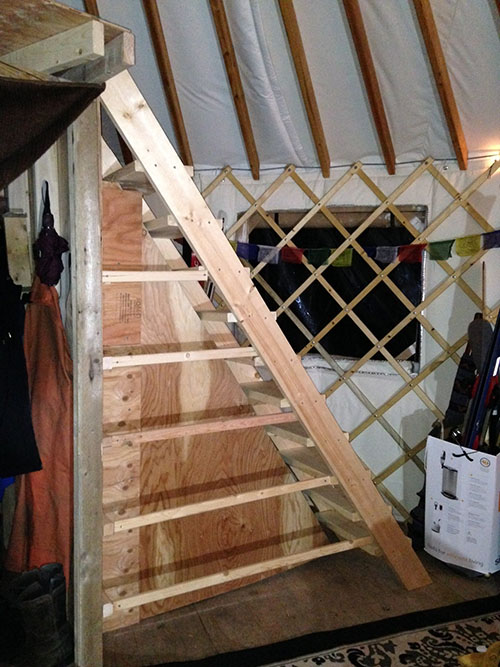 The one incredibly embarrassing photo I’m willing to share: our “closet” for the past month and a half. it is now very close to the kitchen area (which is overflowing with dishes…I’m definitely lacking in the neat freak genes)

Soon to be finished closet space behind stairs to relocate the clothing explosion from the last photo!

These are my major cravings right now, and I am lucky enough that these cravings will all be satiated in the near future. And, while these cravings are not needs, I feel that they are much more than wants (especially the Korean food!). Do I sound like an overprivileged American woman? probably…but I’m a pregnant farmgirl, okay? While my cravings may not be crazy, they are still present and nagging!

Also very luckily, some cravings have been met with flying colors–like a romantic weekend getaway with Evan to a fancy hotel in Anchorage complete with a delicious meal and some good Bluegrass music as well as a fun night out with friends. Thank you, Halloween! 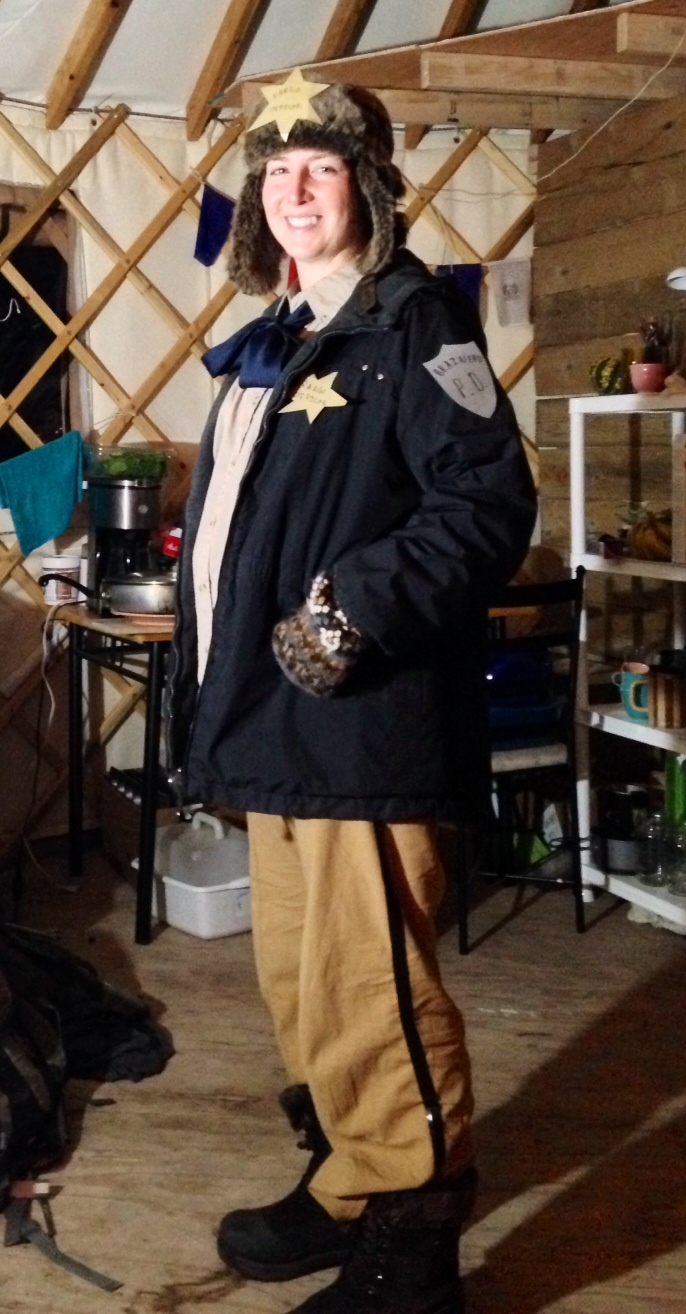 I dressed up as the pregnant officer Marge Gunderson from the cult classic Fargo, don’cha know?!

One of the few clear shots of friends dancing the night away at one of Palmer’s happening bars. I was the happy and willing designated driver!

What have you been craving lately? Will these cravings be fulfilled soon?

Until next time, Farmgirls,

Sending you peace and Love,